Fission Uranium vs. Denison Mining: The Ups and Ups of The Uranium Sector 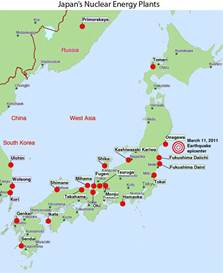 Uranium has been trading flat for several weeks. Currently priced at $36 per pound, the global cost to produce a pound of uranium far exceeds the going market rate. But, unbeknownst to the general public, circumstances for uranium continue to improve.

In Japan, the mayor of Takahama, Yutak Nose, has agreed to restart the Takahama No. 3 and No. 4 nuclear reactors. This follows the successful restart of Sendai 1 and 2 earlier this year, a clear sign that Japan is warming back up to nuclear power. Prior to the Fukushima meltdown, the country derived over 30% of its electricity from nuclear. It is only a matter of time before the full regiment of 48 reactors come back online.

At the Conference of Parties in Paris earlier this month, uranium received another huge endorsement, with scientists and lobbyists endorsing nuclear power as an environmental source of energy. On a macro level, the developed nations of the world continue to work on lowering CO2 emissions, with the energy sector being singled out.  Intuitively, this is positive news for both renewables and nuclear power.

On the production front, AREVA and the China National Nuclear Corporation (CNNC) signed a memorandum of understanding for a possible partnership where CNNC could take a minority stake. The deal is estimated to be worth ~$22 billion and would give the Chinese access to AREVA's nuclear fuel cycle, including: uranium mining, front end, recycling, logistics, decommissioning and dismantling.

AREVA has interests in three of the four largest uranium operations in the world, and we foresee China pursuing this deal to ensure its 29 reactors in operation and 22 under construction will have safe sources of uranium. Long-term supplies are key for any utility and this will be seen in pricing as more and more sources are locked up.

As fundamentals continue to improve, potential avenues for investment continue to dwindle. This is the natural state of any bear market, but particularly for uranium. A slew of mergers and acquisitions such as Hathor, Uranium One, and Uranerz have left fewer options on the table for investors. Exploration companies, unable to raise money to drill have been falling like dominoes. The markets almost witnessed another consolidation between Fission Uranium and Denison Mines; however, that merger fell through. A little background…

The drama first began last summer when Fission Uranium (FCUUF) and Denison Mines (NYSEMKT:DNN) canceled their proposed merger to create the leading junior uranium vehicle in the Athabasca Basin. While Denison shareholders strongly supported the deal, Fission shareholders did not.

One dissident shareholder, FCU Oversight, really did not like the proposed merger, and even nominated his own board of directors. While FCU Oversight eventually retreated, Fission’s momentum was slowed and the merger fell through.

The quandary for investors looking to buy into the leading Athabasca exploration play is which one to chose. Asset sizes are comparable, management teams are both competent, and even the shares have traded in near tandem for the past 12 months! 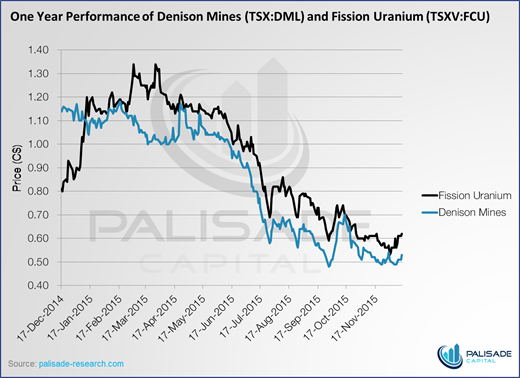 Another merger in the uranium space would have been a strong sign for investors. M&A often indicates a bottom, and the proposed transaction would have cut back on costs while bolstering combined ability.

But the deal did not go through and now investors must decide where to put their money. Which company is the real deal?

Let’s start by taking a look at the basics.

There is no doubt in anyone’s mind that Fission owns a world-class deposit. The recently released PEA confirms this. PLS and its Triple R deposit would rank as the fourth largest producer worldwide if it was operational today.

The initial PEA considers 76 M lbs of open pit mining and 25 M lbs of underground mining, with an average head grade of 2.21% and 0.42%, respectively. What is more impressive is the estimated cash cost of US$14/lb, one of the lowest in the world, and a post-tax NPV of C$1.0 billion and project IRR of 34%.

Finally, there are still several ways FCU can fine tune its operation, including resource growth by exploration, working on the estimated recovery rate of 95%, and connecting to Saskatchewan’s grid rather than using on-site power generation. A primary concern is the price tag coming in at C$1.1 billion. However, because of such robust economics, the investment would be recouped after 1.7 years at $60/lb uranium.

Dissident aside, there is no arguing the track record of Fission’s management team. In the bear markets, the company has been able to raise a lot of cash and in our view the company will be acquired by major mining company. We believe the company will have to overcome some daunting hurdles to become more attractive, including permitting and overcoming the lack of infrastructure in the southwest Basin.

Denison’s flagship project, Wheeler River, is slightly larger than PLS. However, Denison only owns 60% of it, sharing interest with Cameco (30%) and JCU (10%). Nevertheless, if you would compare Fission and Denison by all projects within Canada, Denison owns almost the same amount with 98.4 M lbs. Throw in Denison’s international assets, and Denison eclipses FCU with a staggering 192.8 M lbs!

Denison recently sold its Mongolian assets for $20M in cash, which is expected to be paid out in full by November 30, 2016, after mining licenses are granted. DML is also looking to divest its assets in Zambia and Mali, which should net the company another $50-60M. Denison has already divested all of its US assets to Energy Fuels, and is well on its way to becoming a pure-Saskatchewan play.

Denison is a cash flowing company, deriving revenue from toll milling through its 22.5% interest in the McClean Lake Mill, processing ore from Cigar Lake. Additionally, the company takes considerable fees derived from managing Uranium Participation and providing environmental services. While Cigar Lake has always been a crapshoot, it appears that Cameco (CCJ) finally has the project under control, recently achieving the 10 M lbs milestone.

One definite con for Denison is the company’s minority ownership of the majority of its assets, with interests ranging from 23% to 60%. While Denison holds a portfolio of projects that merit future production, the sparse ownership means less upside on an individual basis and severely limits the field of potential suitors willing to buy the company out. Regardless, Denison has a clear flagship in Wheeler River and it will be interesting to witness how the Wheeler River PEA stacks up against PLS.

And the Winner Is?

If optionality is your poison, then Denison is the clear winner with 95% more pounds of uranium on the books across all projects. If a pure exploration play with a clearly defined and singular plan is your preference, Fission and PLS are more appropriate.

Bottom line is that the optionality on either company is enormous given the size and scale of the deposits. With the fundamentals for uranium vastly improving, each company has its own unique reasons to invest. In the end, the numbers don’t lie, and according to our analysis both are vastly undervalued relative to the current share prices.

We believe the cancellation in the merger has given investors an opportunity to pick up cheap shares. Fission will continually be fine-tuning its PEA and improving economics while Denison will be releasing its own in the New Year. Given the expected turnaround in uranium markets, we expect the next 12-24 months will be a big year for both companies.

Therefore, we failed to name a winner. Fission and Denison are poised for incredible gains and by investing in both companies; investors can mitigate risk while still owning a piece of Athabasca’s most promising projects.