The Crumbling World Order and Who Will Pick Up the Crumbs? 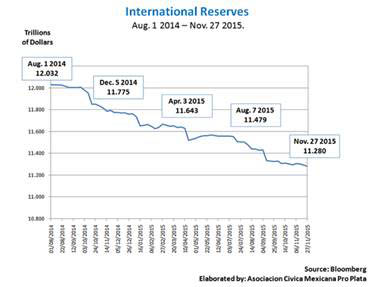 The chart on your left was provided by Hugo Salinas Price in an article he recently wrote with the above noted title. Mr. Price pointed out that international monetary reserves have fallen by $752 billion or 6.52% since August 1, 2014 to $11.28 trillion. That’s a remarkable contraction for a mere fifteen months. He provides an answer to the dynamics behind this contraction in monetary reserves that appear ominous for the existing world financial order. Here are major points made by Mr. Price:

Given recent reports among the BRICS, especially Russian oil sold to China for gold, not dollars, I believe the process is already underway, albeit at the very early stages.  This can only be seen as bullish for gold.