Make Kitco Your Homepage
Favorites:
EDIT
You are in Commentaries•Commentators Corner•Eric Coffin

Yellen Comes Down The Chimeney

You heard it from Janet Yellen.  “Economic expansions (and by extension bull markets) don’t die of old age.”  That’s true.   But they do die from excess, policy mistakes and Wall St Stoopid.

Seven years of zero interest rates have created plenty of capital misallocation, mal-investment and yield chasing.  We’ve seen some minor debacles in the high yield space this month.  Nothing earth shattering but certainly disquieting. Big problems often start small and go unnoticed until the tsunami is on the horizon.  Keep an eye on bonds.  The credit market funds a large percentage of the buying underpinned the bull market.  We’ve got a problem if it stops.

So far at least, my call for the USD to show topping action around the first rate hike and for gold to put in some sort of bottom is correct.  It’s early days though.  The belief that the $US is going much higher is still almost universal.  I explain why I’m not sold on that idea below.  We should all hope I’m right.  If Wall St is correct and the USD index goes to 120 I can guarantee a recession in the US.  It definitely won’t be the “winner take all” play NY seems to envisage.  The gold price hasn’t moved yet but I think we’re set up for at least a tradable rally soon which should make for a brighter 2016.

Enjoy your family and friends and let’s look forward to a 2016 resource market (gold anyway) that provides a few opportunities and not just lots of pain!

They finally did it.   It’s amazing the amount of ink that has been and will be spilt (here too!) about something that seems so, well minor.  In fact, lots of that spilt ink was used to explain how unimportant a 25bps rate hike is in the grand scheme of things.  Except that it is important. Here’s why.

It’s not the one rate hike itself that matters obviously.  25bps is minor, especially when it’s tacked onto, well, nothing.  What’s important is that it marks a sea change from the world’s most important central bank shifting from being extremely accommodative to…  To what exactly?  Certainly not hawkish.  That would be a stretch.  But it is a change in direction to something less accommodative.  From “loosening” to “tightening” at least at a generic level. That’s important since a tightening trend is usually not the stock market’s friend at least in theory.

Yellen tried hard to stay on everyone’s “nice” list and did a pretty good job of it.  She made repeated references to being guided by inflation expectations.  While the dot plots supplied by FOMC members imply several rate hikes next year Wall St doesn’t buy it.  Few outside the Eccles building see the disinflation trend as “transitory” - another word that came up repeatedly in Yellen’s press conference.

Yes, oil is a big factor and one of these days the oil price will start rising again.  I don’t know when but since we’re over a year into the price fall already calling it “transitory” is a bit disingenuous.  There should be a small inflation bump in early 2016 due to base effects—lower prices a year ago generating more stable looking CPI readings. But it won’t move much unless some prices actually start rising.

Disinflationary forces are tied to the stronger USD of course.  I seem to be the only one that thinks the US currency could be topping.  If the Fed doesn’t believe it either I don’t know what they are basing their rosy assumptions on.

Ok, I do know.  The Fed is assuming growth will accelerate, presumably because the Fed raising rates convinces the masses that “it’s all good”.  Why else would the Fed raise rates?  A shockingly large number of Wall St analysts bought that story hook, line and sinker.  It’s a nice story and I hope it’s true but it doesn’t bear much relation to recent reality.

The US is arguably the strongest advanced economy but it’s hardly “strong” by longer term measures.  Growth is ticking along at two percent and change.  Not that impressive and, interestingly, the Fed lowered its estimates of growth going forward at the last meeting. Interesting but not too surprising since the FOMC has consistently overestimated future growth for this entire expansion.

Early this year when everyone else expected the Euro to drop to parity, or less, with the USD I called a € bottom because I believed the EU was on the winning side of a currency move.  The weak Euro helped exporters in the EU just as the strong USD hurt those in the US.

I have no doubt Mario Draghi would love to see the Euro fall further. It may be harder to engineer than Wall St thinks however.  Current weakness has been a boon and economic metrics across the continent have been strengthening.

Take a look at the chart below.  It compares ISM manufacturing new orders readings for the US, EU Japan and China.  There has been a distinct change of fortune over the past year or so. 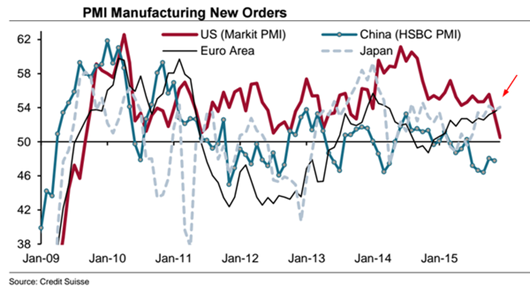 ISM readings have been trending lower in the US for some time, and even service numbers are weakening now.  Over the past few months similar readings have been strengthening in the EU and even in Japan.  And, no, this isn’t about oil.  The surging USD is taking its toll.

China of course has worse problems, and some of the same causes. It may actually help the USD strengthen, for its own reasons.  The Chinese Yuan was pegged to the USD and dragged up in its wake.  Now that China has the SDR inclusion it craved it may feel less like keeping the peg.  The bottom chart on the next page shows the CNY/USD exchange rate for the past year.  As you can see, Beijing is letting the CNY weaken again and it’s now surpassed the August low. 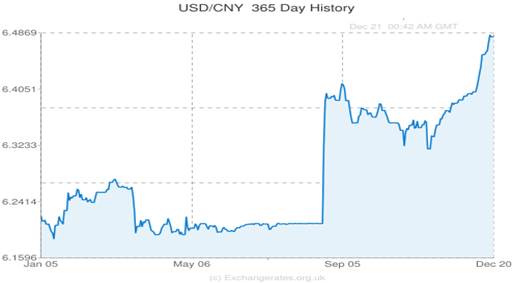 Keep in mind the CNY is still about 20% stronger than it was in 2009 so you can’t say they haven’t done their bit. China is well aware of the political ramifications of letting the Yuan weaken but its awful PMI numbers give them little choice.

When the Fed raised rates there was a strong upward surge in the USD Index but it quickly flattened out.  It has yet to test its high of early this year in the 102 range. It’s certainly too early to say that won’t happen but as I have noted before, nominal rate differentials are not the only driver.

If the EU block shows continued improvement it will be much tougher for Draghi to sell the idea of a broader QE program to the hawks on the ECB board.  Likewise, if the Fed is actually right about core inflation picking up that will lower the real (inflation adjusted) interest rate and its real, not nominal, rates that drive yield seeking currency flows. The real rate differential between the US and the EU is much smaller than the nominal one.

So what does all this mean for the markets?  A tightening rate trend should and will be reflected across the credit spectrum. That’s normal and wouldn’t matter much if we were in the early or mid-stages of an expansion but I think we can all agree we’re in the late innings now.

I’ve commented before about my concerns about high yield and junk debt.  Those concerns increased since the last issue when three small mutual and hedge funds focused on risky credits restricted redemptions.  All the funds in question are small by Wall St standards.  This is not “Lehman 2.0” It’s not meaningless either, however much most of Wall St is downplaying it.

Problems in the credit market always show first at the risky end of the spectrum.  That’s how it should be.  The question now is whether it spreads.  I wouldn't assume it doesn’t given the weakening margins and USD headwinds so many sectors are now facing.  Again, this is not just about oil. 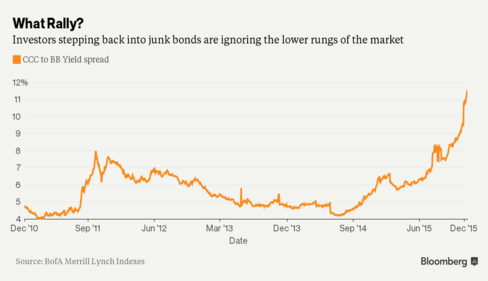 The chart above shows the spread between CCC and BB credits. It’s blown out way beyond the extremes during the 2011 Euro crisis.  This is not good and the problems may be spreading. 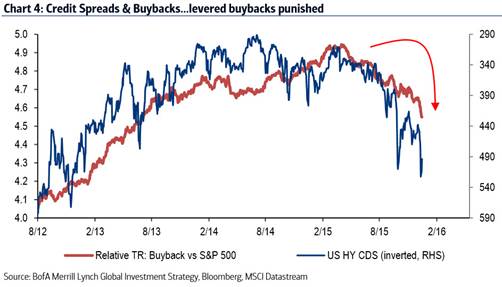 The chart below compares the level of share buybacks to the HY credit spread (inverted).  The inverse correlation isn’t perfect but buybacks do seem to follow the strength of the credit markets.  This makes sense as much of the monies used for buybacks and leveraged buyouts is sourced in the debt markets.  That matters.  A lot of the upside volume in the past 3-4 years is directly attributable to these two items.  If liquidity is drying up on the credit side we’ve lost one of the main underpinnings of the NY markets.

The major markets have been counting on a Santa Claus rally and Fed feel good to carry the day. The yearend rally is mainly about fund window dressing, not fundamentals, and is one of the most dependable seasonal moves.  That said, it hasn’t arrived yet.  If we don’t see a significant rally through yearend on the S&P traders should definitely get defensive.  I would consider a failed “Santa” rally a very bad sign.

NY has now put in a couple of lower lows, even with the Fed following the bullish script.  Junk bonds got a bounce after the “redemption scare” but it isn’t holding as this is written.  Most of the commentary I’m seeing is bullish but the average stock in NY is almost in a bear market.  The rally continues to narrow.  These are all negative signs. Hope for the best but prepare for the worst.  I think we have rough sailing ahead.

So far (yes, it’s only three days…) the USD is not holding its gains and gold is strengthening post-Fed as I had expected.  I’m about the only one who did expect that so I won’t be offended if you don’t find my belief alone convincing.  I’m sticking to that call however.  The strong dollar meme is universally accepted but also very crowded. If NY gets weak it will be a tougher trade to stay in.

The short gold trade is even more crowded.  Current COT positioning is the most bullish it has been in the past 15 years.  I’ll repeat that.  Gold positioning is the most bullish it’s been in 15 years.  The potential for a sizable short covering rally is very good.  If the USD meme changes on the back of that as I expect we may finally have the bottom we’ve waited for.  Most traders are still waiting to see a “trigger” for that move.  If the S&P really rolls over as I think it may soon, that could well be it. Gold could be the place to be again very soon.