What Crisis Is The Gold/Oil Ratio Predicting This Time?

The Oil-to-Gold ratio graphic shown below appeared on January 18th at Zero Hedge. It is fascinating to me for three reasons. First, as the chart points out, when oil becomes extremely cheap relative to gold—and an ounce of gold will buy more oil now than ever before—it suggests that some major financial crisis is likely to follow. Secondly, gold usually responds well to a major crisis. The third reason this is of interest to me is that low energy prices generally bode well for the profitability of gold mining operations.

Regarding point #2, I hasten to add that though a crisis is usually good for gold and gold mining profits, I do not cheer for crisis. Given monetary policies over several decades, I am positioned for crisis which I believe are baked into the system. Since 2008-09 that position has not come without great cost to me and my readers. But in the long run, you cannot avoid a major crisis in capitalism given the fact that policy makers, led by the Federal Reserve Bank do not allow price recognition of capital, thanks to interest rate manipulation and what can only be described as the bastardization of capital. 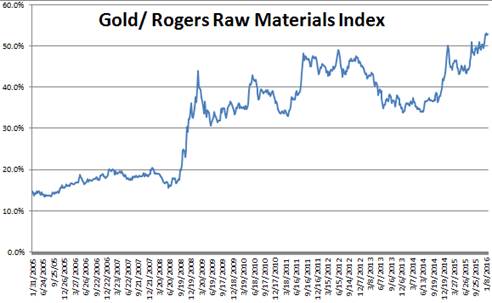 There are things we cannot control but our actions can and must result from what we believe to be true and a great deal of what we believe to be true follows from historical examples. And so, given the illustration on the left, it is impossible not to pay attention to the fact that very high gold/oil ratios have been correlated to major crises over the past 30 years. Dating back to the OPEC Oil Crisis of the early 1980s, the gold price has never been as high relative to oil as it is now. And so we think it is likely presaging some or perhaps many major catastrophes ahead. We hope and pray we are wrong. 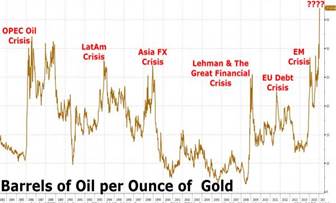 Certainly the past is not prologue to the future, but this chart really stood out in my mind.  In addition, gold is rising to a new high relative to a basket of commodities as you can see from the gold/Rogers Raw Materials chart on your right.  This should be good news for a select group of gold miners, four of which I have discussed in my newsletter. These are gold miners I think are in the best position to survive this difficult time for the mining industry and grow dramatically in the future as the yellow metal finally turns the corner, hopefully this year.

It is interesting now how even a few big name mainstream types are starting to talk in cataclysmic terms. For example, billionaire financier George Soros warned from Davos this past week that the European Union is on the "verge of collapse" over the migrant crisis and is in "danger of kicking the ball further up the hill" in its management of the issue that saw more than a million migrants and refugees arrive in the region in 2015. Soros also compared our current global financial situation to that of 2008. And, in a prerecorded interview for my radio show (www.jaytaylormedia.com/audio/), Roy Sebag told me that the number of people seeking to get out of the banking system and into GoldMoney/Bitgold is increasing very dramatically now. At the same time, Sharmin Mossavar-Rahmani, chief investment officer at Goldman Sachs, told Charlie Rose this past week that the equity bull market still has a little longer to run. The cynical side of me says, “Of course! Keep the little guy in the market as long as possible to extract the last drop of blood from him that you can!”

But, I would do well to humbly realize that only the Creator really knows the heart and mind of Ms. Mossavar-Rahmani. Christians are not supposed to judge. But then at the same time, the good book tells us to be “wise as serpents.” As such, it seems to me it would be very foolish to ignore what the gold/oil ratio as well as what Mr. Soros are telling us.