Weekly Gold Focus – Gold futures will continue to keep an eye out whether the U.S. stock market recovery can gain traction even with weakening U.S. economic data.  While the U.S. stock market had received a boost last Friday on BOJ’s move to negative interest rates on bank deposits. Weakness in economic data and global uncertainty will continue to postpone expectations of the FED’s next rate hike and will be the most paramount factor in gold’s ability to continue an uptrend. Expectations on this coming Friday’s Jan unemployment report are expected at +190,000 jobs while remember December was +292,000.

Important Key Economic Data and Global Events for the Week
Monday December personal spending and personal income are due out. ECB president Mario Draghi speaks out in the European Parliament debate on the ECB’s annual report. Tuesday Kansas City Fed President speaks out on the U.S. economic outlook and monetary policy and January total vehicle sales are posted. Wednesday weekly MBA mortgage applications and the January ADP employment and ISM non-manufacturing index and Thursday initial claims are released. The BOE will announce its interest rate decision and asset purchase target, there are expected to have no change at 0.50% and 375 billion pound asset purchase target. Friday is the big day with January Non-farm Payrolls expected at +190,000 and the unemployment rate is expected at 5.0%

Gold futures should continue to see a benefit from increased physical demand as an alternative asset after the BOJ’s latest move to adopt a negative interest rate on reserves held at the BOJ. This may continue to put pressure on the yen where fund buying of gold on long positions in ETF’s climbed to almost a 3 month high. Bulls in the gold market should keep an eye on the Dollar where any upside continuation could cause a setback in the rally.
There are many factors that could affect the direction of the gold market this year. For a longer outlook on gold, please click on the link to register for our 2016 Metals Outlook. Below is an excerpt from the guide:

Following a three-year slide in precious metals prices, a historic, three-year rally in the U.S. dollar and one of the most deflationary environments in modern history, it is possible that sentiment towards the precious metals bottomed-out into the December 2015 lows just below $1050/ounce. Seeing the gold market rally over $50 per ounce mid-way through January 2016 in face of the late 2015 deflationary spiral and the exploding U.S. dollar would seem to suggest a change in mentality is taking place. 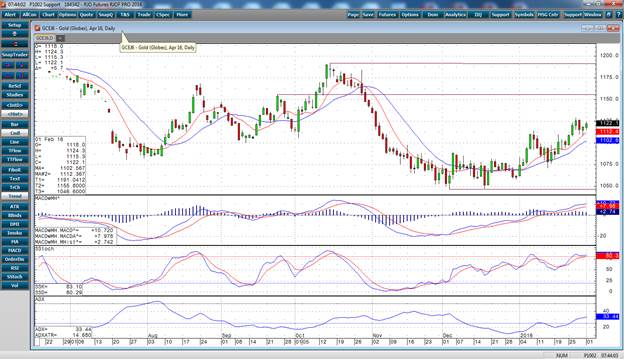 The daily gold chart shows that momentum indicators MACD and slow stochastics are rising steadily but not reaching over bought territory giving a bullish indication. ADX, which measures strength of the trend, has started to turn up showing there is some driving force behind the recent upward move. Gold moved through the recent high on January 8th of 1113.1 to indicating a breakout. Since then gold has formed a small sideways consolidation on the chart. Pushes through 1128 the January 27th high could indicate the next upward target of 1150. Watch for increased volatility coming into Wednesday with the ADP release at 7:15 am cst and Fridays 7:30 am cst non-farm payroll report release. Caution for a setback may occur if gold drops below 1108 which was Fridays low and could start a new consolidation phase around 1100. 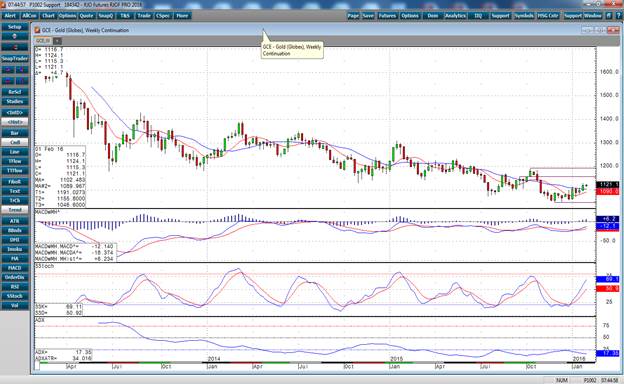 The charts above are from provided by RJO Futures PRO, an exclusive and sophisticated online trading platform with integrated tools to seamlessly trade and monitor the markets. Traders can easily view market activity, place orders, and track orders and positions. It comes with a 100K simulated account with real time data and execution.