Have the Miners Bottomed?

We opened our doors at Elliottwavetrader.net back in 2011 with our top call in the metals market. Since that time, we have been traversing a complex correction for the last 4+ years. And, as I have been saying since the end of last year, we are very close to its completion. In fact, there are indications that the miners “may” even have bottomed already.

I remember back at the end of 2013, I wrote articles on various financial web sites which called for the HUI to drop towards the 100 region when it was trading over 200 at the time. Yet, very few took me seriously. For those that remember, that is the .618 retracement of the larger degree wave I off the 35 region low, as you can see on the attached long term HUI chart. 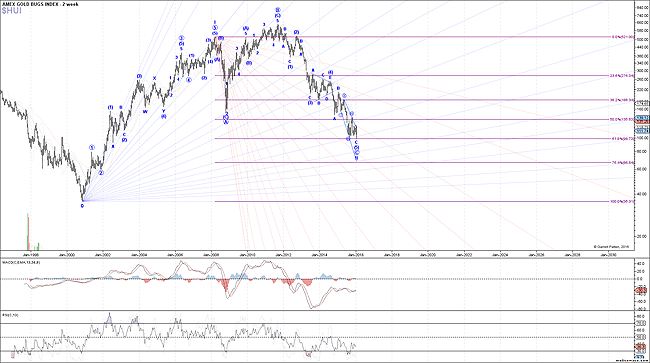 Moreover, we have what seemingly counts as a completed 5 wave c-wave structure right into our long term retracement target. But, even though we have struck the target we set forth years ago, we still need confirmation that the low has been struck. You see, commodities often see extended 5th waves, and until I am more certain that the bottom has been struck, I am going to be wary of a potential extended 5thwave down. 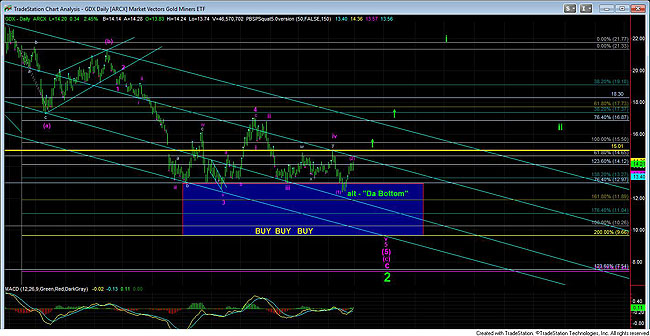 We see this potential best on the attached daily GDX chart. As you can see, we have a minimal 5 wave structure, which bottomed in January at 12.40. But, as I noted above, since commodities often see extended 5th waves, I am looking for an extended 5th wave as my primary expectation as long as the market remains below the top of the wave iv high at 15.01. As long as we remain below that level, we have a (1)(2) set up to take us down to the 9.65 region (and possibly even a bit lower) in an extended 5thwave to complete this long term correction. In fact, I noted in our Trading Room at Elliottwavetrader.net on Friday that this would be an ideal region to hedge any long term positions you may have in mining stocks, as we are within 80 cents of the invalidation of the immediate downside potential.

However, if the market is able to move through the 15.01 level, it would invalidate that (1)(2) downside set up, and be the first indication that a long term bottom has been struck. Confirmation for this perspective is seen by a rally through the 17 region, with the potential for a 5 wave structure off the bottom taking us back towards the 21 region, as represented by the green wave i.

As far as the GLD, I cannot say that the pattern looks nearly as potentially complete as we have in the GDX. Rather, the GLD seems to be completing a larger degree ending diagonal for this final 5th wave, which seems to be within the (b) wave of the final 5th wave within the ending diagonal. As long as we remain below the resistance box noted on the daily chart, I will be looking for a (c) wave decline towards our longer term 98 region ideal target.

Now, diagonals often complete with spikes below their lower trend channel, which means that we can see a spike below our long term 98 region target. But, when diagonals complete in such a manner, the reversal from that spike low is even stronger than the break down below the lower trend channel. So, if we do see a spike below the 98 region, I don't believe the market will maintain below that level for much time at all. Rather, I think that any spike below that level will be strongly reversed, which will be the initial signal that the long term correction has completed. So, while much of the market is waiting for a significant break of the $1,000 level in gold, I think many may be disappointed. And, if we do see it, one should view this as a gift from the market gods.

Moving onto silver, it still looks like the micro wave iv has not yet completed. Ideally, we can see one more rally up towards the 14.80 region to complete the c-wave of iv. That should set us up to drop in the final wave v towards our long term target in the 12.75 region. Any break down below 14 is the indication that we are on our way to our final lows.

In conclusion, I still believe we have lower levels to achieve before this long term correction has completed, especially in the metals. GLD and silver seem rather clear that their patterns have not yet been completed, but GDX has some potential for a bottom being in place. Yet, as long as we remain below the 15 level, I must maintain an expectation for an extended 5th wave down towards 9.65 before a final bottom has been struck in the GDX.

Oct 27 Gold and silver hit a speed bump
Oct 26 Why isn't gold going up with inflation
Oct 26 US fiat: great effort but no performance
Oct 26 Will pandexit support gold?
Oct 26 Gold: The S&P 500 stirs the pot