In the Summer of 2015 a major discontinuity occurred in financial markets. That which was, was no longer. That which had not been, suddenly was. Reasons for that abrupt shift in the character of financial markets are not entirely clear. Was it exhaustion of both bullish and bearish runs? Was the anticipation of an interest rate increased so certain that financial markets began to immediately incorporate such an event? Whatever, Gold related investments now clearly dominate returns and growth fantasies have collapsed. That shift may be more permanent than many acknowledge.

Chart below portrays returns on a variety of indices and prices from the end of July 2015 thru 5 February 2016. Those returns are ranked from highest to lowest. A table with the raw data for the chart is provided at the end of this article. 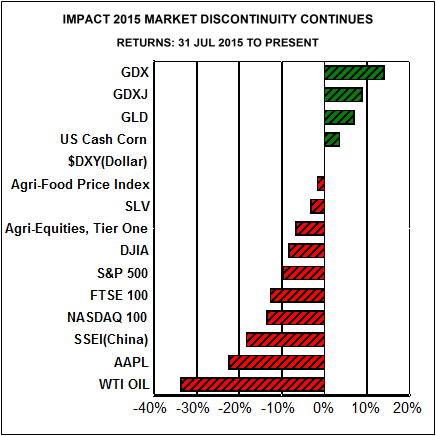 Bottom portion of the chart is the most easily understood. Equity markets now dominate the negative  returns. Those indices had been driven higher by euphoric valuations of the stocks of growth fantasies. The multiples for those stocks were built on near zero interest rates lasting near indefinitely. Valuations of such stocks are the most vulnerable to any increase in interest rates.

The present value model for the valuation of stocks incorporates both an estimate of growth and an interest rate component. For growth stocks that calculation is extremely sensitive to interest rates.  Any increase in interest rates, especially one that may be permanent, causes a large negative change in the valuation of growth stocks. That those indices dominated by growth stocks fell the most is therefore both quite rationale, possibly in infancy, and likely semi permanent.
That Gold related ETFs dominate the top of the chart is not surprising. Price of $Gold had reached a historically extreme under valuation relative to equity markets. Too many investors have owned too little or no Gold. Viewing this chart over time would have also revealed that the dollar index had fallen from the top slot to number six as the dollar has peaked, and has been moving lower. The Euro, as just one example, which was forecast to be trading under par, recently reached $1.12. And of course we must note that Gold is a viable alternative to financial markets when they falter, and especially when that failure may endure longer than the forecasts of some advisors.

Aside from Gold, which many investors should own more of, another interesting development shown in that chart is the ranking of U.S. cash corn and the Agri-Food Price Index. Late last Spring we advised some portfolio managers that corn would outperform APPL(s). Look on their faces displayed a belief  that age had done serious damage to our ability to think. Someday they will understand that grey hair is a sign of experience, not a fashion statement. In any event, dollar prices for Agri-Commodities are likely to continue to advance due to a strengthening long-term Agri-Economic cycle and the weakening of the U.S. dollar. 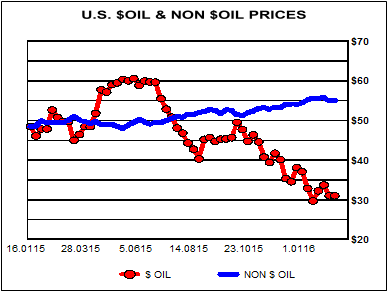 Firmly in control of the bottom of the chart is U.S. dollar price of oil. A significant part of the fall in that price has been due to the appreciation of the dollar. Red line in following chart is the price of U.S. dollar WTI oil. Blue line is the price of that oil as it would have looked to consumers that do not live in dollars. To non dollar consumers, the price of oil has  has not fallen, and to a goodly number it has actually risen. Do not dismiss impact of that economic reality on demand for oil. As dollar depreciates both the dollar price of oil will rise and demand from non dollar consumers will increase.

All of this leads to two questions for investors. Are portfolios adequately diversified? Owning “twelve” technology and internet fantasies is not diversification. Do portfolios have both financial assets and exposure to real assets such Gold and Agri-Foods?

Ned W. Schmidt,CFA has had for decades a mission to save investors from the regular financial crises created by economists and politicians. He is publisher of The Value View Gold Report, monthly, with companion Trading Thoughts. These reports again turned to raging bulls on Gold and Silver in 2015. To receive these reports, go to:    www.valueviewgoldreport.com
Follow us @vvgoldreport