Consensus Macro Trades Stop Out: Gold Has Made A Near Term Top

Macro consensus trades into 2016 have not worked well, at all. This week saw a large flush out in positioning across financial markets. There are three consensus trades that we feel have been particularly squeezed and what we believe was a final clearout of these position sent other assets, such as gold, to extreme levels that present a number of trading opportunities.

The Fed Will Hike, Others Will Not

This was the premise of most consensus trades into 2016. Whilst the market was not convinced that Yellen was going to increase rates as much as the dot plot suggested, hikes were expected nonetheless. This dynamic shaped a number of trade ideas into 2016 across asset classes. We were not convinced of such hikes, which we wrote about extensively in late December, based a widening of credit spreads seeing real borrowing costs increase, reducing the need for hikes. However we did not anticipate that the market would so vigorously discount all chances of any hikes this year.

In the stock market there was a view that banking stocks would outperform the wider index this year. An increase in the Fed Funds Rate would improve margins and see financial stocks outperform other sectors. This consensus trade has been doubly hit.

Firstly, the Fed hikes have not come, and expectations of them coming any time soon are near zero. Secondly, the widening in credit spreads that we highlighted in December have spread across a number of sectors. What began as a few energy companies struggling with a collapse in oil prices, flowed on to other materials and mining companies, selling fuelling more selling, and eventually leading to credit concerns at some major European banks.

In sympathy with the view that “the Fed will hike, others will not” were major bets that the USD would continue to strengthen versus other major currencies. In no pair was this consensus view stronger and positioning larger than in USD/JPY.

The vicious gold spike mid-week was mainly caused by a weakening of the US dollar versus the Yen. A consensus trade going into 2016 was that the US dollar would strengthen compared to the Yen, given that the BoJ was loosening monetary policy while the Fed was hiking rates. This view was turbocharged with the BoJ announcing negative rates not so long ago. However, this trade has been proven wrong, as the US dollar has in fact fallen considerably against the Yen.

With many exiting this trade, after being proved wrong, the market moved too far. This has pushed USDJPY notably below the US dollar index as a whole. Thus the US dollar has been dragged lower, which has pushed gold higher.

As yields rise, bond prices fall. With many expecting a number of Fed hikes this year, investors sold bonds expecting prices to fall. As Fed hikes appeared less and less likely, investor’s scrambled to buy bonds and this has fuelled a major rally. As a result, bonds priced out almost all chance of a rate hike in the next 12 months and gold consequently soared. The pricing for future rate hikes has now returned to less extreme levels with bonds falling back from their rally mid-week.

However, gold has not followed bonds lower, which means the metal is likely to fall from here. Bond pricing currently implies that gold should now be around $1190, which is approximately a $50 decline from the close on Friday.

We believe gold has now come too far, too fast. The scramble to stop out of the macro consensus trades so far this year has sent gold on its biggest rally in recent years. The largest of bounces in gold since the peak in 2011 prior to the current was following the end of the bull market and the break in April 2013. The current bounce has moved marginally higher than this in percentage terms.

Other technical factors also show gold to be too high. The RSI finished the week at 82.13, but on Thursday moved to the highest level since the peak in August 2011, when the Eurozone was on the brink of collapse and the Fed was engaging in massive QE. Even in these massively bullish conditions gold still sold off after the RSI approached 90. Therefore it is highly likely that gold will be sold off in the near term. The next $50 move in gold is lower. 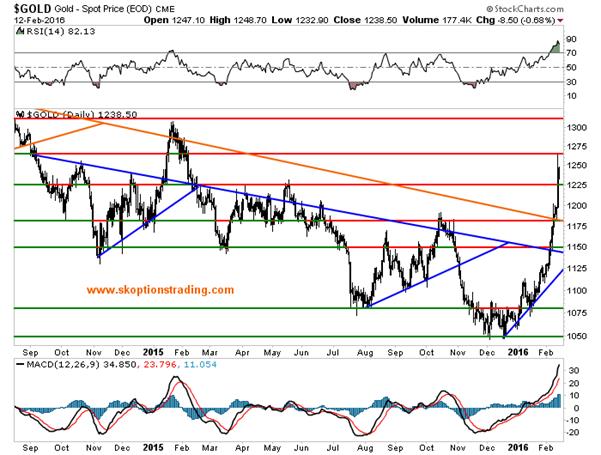 Just as we are of the view that gold has come too far too fast, mining stocks have done the same if not more. We do not think this move is sustainable. A spike in spot gold does not magically remedy many of the underlying issues that gold mining companies face. We are particularly wary of companies with debt that need to be rolled over in a poor credit environment. We have touched on some of the detail with our subscribers this week and intend to cover this in a dedicated article for publication shortly.

Having held the view for all of 2016 that there was minimal risk of a fall in gold prices we now have the opposite view. Gold will not fall to re-test the lows, but the next $50 move is down, and our positioning reflects that view. We are positioning for a bounce in general stocks, but a drop in gold miners. It’s been a rough and rocky ride this month, but that only creates trading opportunities and in this environment we believe options are key to limiting downside and optimizing risk-reward dynamics.