Why Central Banks Will Buy Silver

Money is a store of value (or wealth), a medium of exchange as well as a unit of account. In order for money to be effective in the above it has to have the following properties:

Silver also has these monetary properties, and it has been used as money for centuries. Furthermore, central banks also used to hold silver as part of their reserves, as well as issue it in the form of coins.

Today, silver has basically been completely demonetized, with virtually no central banks holding silver as part of their reserves. This demonetization happened over a period starting in the 1870s and ran until about the late 60s. The fact that silver was being completely demonetized, while central banks were still holding gold as part of their reserves is a major contributor as to why some see gold as money but silver as a commodity.

The Bretton-Woods was virtually the final nail in the coffin for silver's use as money, when the nations agreed to structure their monetary system around gold and the US dollar (to the exclusion of silver). Today, we are basically in a post Bretton-Woods era, with the monetary landscape having been decimated by the effects (massive credit extension) of Bretton-Woods and that which followed.

For example, they love it, when it gives their currencies credibility, during a time when fiat currencies are being questioned (like during most of the 70s). During this period until about 1976, the central banks were net buyers of gold.

During the 80s, there was still pressure on fiat currencies, which forced central banks to hold on to their gold. During this period, central bank gold reserves remained virtually constant.

By the 90s, the financial landscape had changed to a situation where it was in the interest of most countries to devalue their currencies (to contribute to the great credit bubble). During this period central banks were net sellers of gold and this continued until about 2008/2009.

The 2007/2008 financial crisis brought about a major change in the financial landscape, forcing central banks to become net buyers of gold (which they continue to be). Again, much like the 70s, it is in their interest to buy gold, to support their suspicious currencies.

Since, the 2007/2008 financial crisis, there have been big developments (like the BRICS bank) to replace the US dollar as the reserve currency of world trade. This is set to intensify as more and more currencies are being put under pressure by this continuing financial crisis.

In order for any development to be successful, something like gold has to be used, to provide the necessary credibility. This will (is already) cause a scramble among nations to get as much gold as possible (The US is the exception to this, since it is not in its interest to lose US dollar reserve status).

With this happening, it won't be long before central banks buy silver, especially given that silver has all the monetary properties that gold has. This might seem so unlikely to most, given their recent historical attitude towards silver. However, the only reason they were not interested in silver is because it was in their interest to hate it.

Now, however, it is fast becoming well aligned with their interest of surviving (as a monetary authority or country) and even superseding the current order. After all, it is not like having silver is new thing for them.

Fractal Analysis of the Gold/Silver ratio

Below, is a 100-year Gold/Silver ratio chart (from macrotrendsnet): 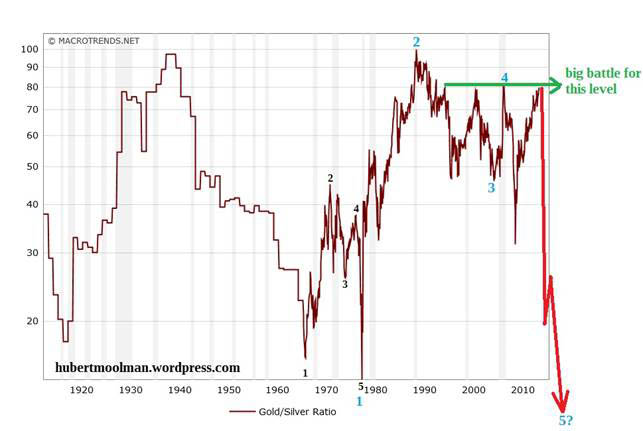 The current pattern has not completed yet, and it would suggest that it will only complete at a point much lower than a ratio of 15. Such a completion of the pattern is consistent with the bullish fundamentals of silver (and gold) in relation to paper money – understanding that a lower ratio will likely mean higher gold and silver prices. Note that there is a major battle for the 80 - level of the ratio.