Gold is Robustly Leading the Year; the S&P is that We Ought Fear

With but one trading day left in February, we're nonetheless styling this week's Gold Update as our typical month-end edition: it thus features the year-to-date BEGOS Markets Standings, year-over-year comparisons of Gold vs. selected key equities brethren, and our layered Gold Structure chart, amongst others of the favoured cast of characters.

But as the vast majority of our cherished readership indubitably, (whether directly or indirectly), maintains some degree of general equities exposure, before doting upon Gold's very strong start now two months into 2016, we wish to straightaway chime in with a cautionary observance. You might consider this as being from our "A Word to the Wise is Sufficient Dept." The FinMedia-marveled rally over these past two weeks in "Fools Gold", (aka the "Stock Market") is of the most precarious nature. True, the market is never wrong, however: if the following graphic doesn't scare you outta yer stocks, (save for those precious metals-based), we'll only be able to bid deference to your sinking ship by a sympathetic wave from shore. Here's the chart, then its explanation. Man the lifeboats:

In the upper panel, the red line tracks the cumulative change of the S&P 500 from three months ago-to-date; despite all the relieving ballyhoo, 'tis not impressive; the blue line tracks the Index's moneyflow regressed into S&P points; toward maintaining the ballyhoo, 'tis not broached. In the lower panel is the cumulative difference of those two lines. That difference as of the S&P settling yesterday (Friday) at 1948 is -237 points. In therefore making use of your third grade arithmetic: 1948 - 237 = 1711. The last day the S&P settled below that level? 15 October 2013. Gold's settle that day? Not far from today's 1223: 1280.

What's happened in the interim? The StateSide M2 money supply has increased by $1.58 trillion, (+15%), and global debasings, debt and associated derivatives by indeterminable bazillions. As for the Economic Barometer (which we'll next see): 'twas higher then than 'tis today. Really.

But wait, there's more. Given that the S&P's tendency is to move toward the level of the moneyflow, feel free to say "Ouch!" Given that the now concluded Q4 earnings season for our nation's largest 500 publicly-traded companies (per BofA Merrill Lynch) was the weakest since 2009, that too merits an "Ouch!" Given that our honestly calculated price/earnings ratio of the S&P is doubly high at 37.9x, 'tis "Ouch!" Part Trois. Triple "Ouch!" Now you're in the know for when the S&P materially let's go.

"On come on, mmb, you've beaten that drum before and the market kept going up..."

And Squire, a studied review of history on your percipient part shall reveal the past inevitabilities wherein markets -- which incessantly rose in economic environments lacking both real earnings and confirming moneyflows -- ended badly.
"But still, mmb, the GDP for Q4 just got revised up to 1.0%..."

Which, Squire, is half the final Q3 reading of 2.0%. We view the truth of Q4 as the light-blue section of the Economic Barometer's blue line as below shown from one year ago-to-date, (along with the red track of the S&P). Remember: the Bureau of Economic Analysis uses four collective data categories to calculate a quarter's Gross Domestic Product; the Econ Baro employs 50+ metrics per month. We chart, you decide:

Oh to be sure, the Baro most recently is seemingly providing some upside impetus for the S&P. But again, sans earnings and moneyflow in what remains a bodaciously bloated bubble, akin to the foam atop one's beer, or la crema di espresso, 'twill be short-lived. Now to Gold.

Indeed what's livin' it up year-to-date is Gold, and ever so starkly in leadership as we turn to the BEGOS Markets Standings: no other component is even close to Gold! Save for just one trading day left in February, Gold's being +15.3% is its second largest opening two-month gain in the last 25 years! The only year therein to beat 2016 in the first two months was 2008 (+16.3%), from which price proceeded to double over the next three and one-half years. And how cool 'tis that history tends to repeat itself (!):

Yet as we've continued to caution in recent missives, (as well as in the website's daily Prescient Commentary), Gold remains "high" relative to its BEGOS valuation (in regressing price's movements to those of the other primary BEGOS Market components). Here next is the full year-over-year picture of Gold's daily closes with the smooth pearly valuation line (both in the upper panel), and the difference of those two lines (in the lower panel). The good news is that the smooth line is steeply rising to assist in closing that gap. And of course the best news is, (per our opening scoreboard), by StateSide M2 Money Supply creation alone, even with accounting for increases in Gold tonnage itself, price at this writing "ought be" 2537, which from the present 1223 level is better than a double. Batter up:

Still, we prudently remain "near-term" pullback wary for Gold. And perhaps rightly so as below in the left-hand panel of Gold's daily bars from three months ago-to-date, the "Baby Blues" are just perceptively beginning to roll over a bit, suggesting the 21-day linear regression trend is losing upside consistency, whilst in the right-hand panel there's trading support as denoted at 1211; but should that break, we'd look for the prior very supportive level of 1191 to curtail further bail:

As for the weekly bars, they beautifully depict Gold's leadership up-thrust so far in 2016:

And speaking of "up-thrust", here are the year-over-year percentage tracks of Gold itself along with these equities representatives: the Gold Bugs Index (HUI), Newmont Mining (NEM), Goldcorp (GG), Franco-Nevada (FNV), the Global X Silver Miners (SIL). In referring earlier to the S&P as "Ouch!", the antonym is quite appropriate here for "The Golds", given their recent upside acceleration: "Ahhh...":

Now to our Grand Finale of Gold's Structure by the month, the layers as therein defined. And what just happened? That's right: Gold has moved back up into the basement (aka "sous-sol")! I know that doesn't sound very impressive -- but it sure beats the hell outta the alternative! 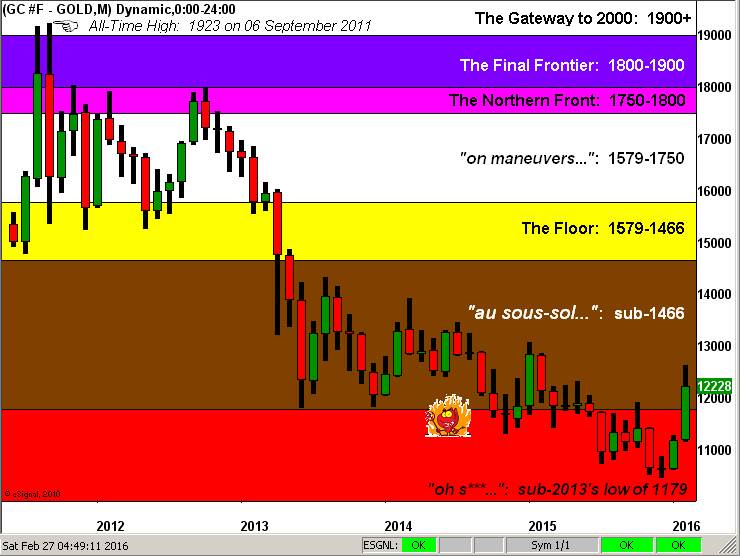 Ahead of another busy week of incoming Econ Data for the Econ Baro, these few fundamental observations serve as Gold Positives in essentially requiring monetary resolution if not outright safe-harbour alternatives, (i.e. precious metals).

■ What in the world (literally) is going on with its great banks? HSBC lost money in Q4 and is losing credibility with the SEC; Standard Chartered, the roots of which trace back to pre-Civil War days, just posted its first annual loss in 26 years and is facing accusation involving a "dirty debt" embezzlement controversy in Tanzania; Royal Bank of Scotland lost £2 billion in 2015, not having posted a net profit since 2007; a week ago we'd suggested BS coming from GS, but now look at RBS.

■ Moreover, we read of world trade as being in its worst slump since the days of The Black Swan (2008/2009), with export activity notably drying up amongst the so-call BRIC nations, which I suppose means the so-called PIIGS nations ain't buyin' much these days. Indeed, EuroZone private business growth for February put in the weakest incremental increase in better than a year, falling far short of expectations, and notably slowing in the two largest of the Zone's nations: Germany and France, which for the former, manufacturing sentiment dropped by the largest amount in more than seven years.

■ Already separate of course from the EuroZone is the United Kingdom, and amongst the political fray we've now David battling Boris over bonking themselves by Brexiting from the European Union. "We don't need no stinkin' Continent!" Well, Japan's doin' just fine on its own, right?

■ Further, we've the Federal Open Market Committee Follies, (the Fed's "Tan Tome" due out this Wednesday, 02 March). Vice Chairman Stanley Fischer noted this past week that the turmoil we've been seeing in the markets may pass with little economic impact: he ought read our opening bits. Also just on record is St. Louis FedHead James Bullard opining that the probabilities for a world recession are not particularly high: he ought read our above few bullet points. And then on Thursday at NYU, our own FedHead John Williams put forth that the economy remains in good shape: he ought assess the Econ Baro's highlighted run through that Q4 reporting period.

All that said, the Dow Jones newswires published a piece during the week entitled "Historic Pattern Says the Risk of a 2016 Bear Market is Zero", which put me in mind of the sole recipient of the very first Gold Update over six years ago. To quote the inimitable JGS: "I don't invest in trading systems because they only work for a while." No kiddin'. At least Gold's been around as money for some 5,000 years. Now that's a good while!