We have examined the major theories of manipulation in the gold market, so let’s deal with other interesting problems: high-frequency trading, declining inventories in Comex, London bias and gold leasing.

First, some people accuse big banks of suppressing gold prices by not only using ‘naked’ shorts, but also engaging in high-frequency trading (HFT). The HTF is a type of algorithmic trading characterized by the large number of orders at very fast speed (they operate in milli – or microseconds). Many investors believe that bankers using HFT create massive volumes of artificial traffic, or place and quickly cancel orders in order to create waterfall declines in the price of gold.

However, most HFT firms trade only intra-day, so their impact on the gold market should be short-lived by definition. Moreover, the HFT may be actually helpful for markets, since it improves efficiency by discounting new information and driving the market into equilibrium much quicker. Additionally, since HFT companies execute thousands of orders an hour, they add liquidity to the market. Undoubtedly, some companies abuse this technology, but the fraudsters have always existed. HFT may be considered as a next step to accelerate trades, as computers or financial press before. It may be used as a tool for manipulation, but not in a different way than computers before. As a reminder, financial institutions adopted extensive computer networks in the 1970s, when gold was in the bull phase. Similarly, HFT has taken place at least since 1999, but it did not prevent the bull market in gold (see the chart below).

Chart 1: The HFT did not prevent the bull market in gold in the 2000s. 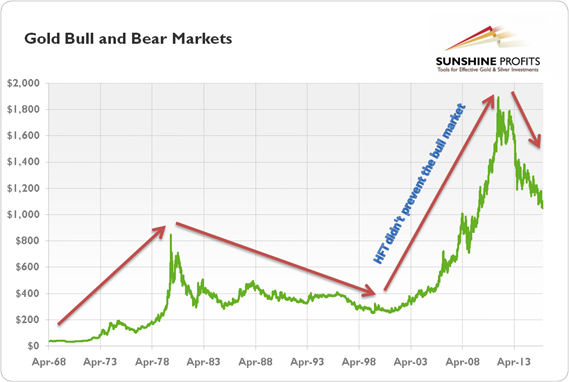 Second, other investors point out that decreasing gold inventories in the Comex gives evidence of manipulation in the gold market. The decline in Comex gold inventories is seen as a sign of shortage of physical gold relative to the massive creation of paper gold. However, the amount of ‘registered’ gold is not the only amount of gold available for delivery, since eligible gold can be quickly converted to registered. Moreover, the changes in Comex gold inventories do not drive the price of gold, but result from gold price fluctuations. When the gold prices rise, more people want to own it, and vice versa. Thus, the declining Comex inventories are not the proof of manipulation, but simply reflect the bear market in gold and negative sentiment among some owners, who withdraw metal from that exchange to sell it in other markets.

Third, another type of alleged evidence against bullion banks manipulating the gold market is the so-called ‘London bias’, i.e. the statistical regularity showing that gold prices usually decline during London trading hours, especially around the PM Fix, whilst they rise during Asian trading hours. We do not deny that such behavior exists, but investors should be aware that certain price patterns do not as such constitute evidence of manipulation. There are many anomalies in the financial markets (like the January effect), which are not necessarily caused by manipulation. Moreover, during London trading hours, the New York markets open and some of the most important U.S. economic data is released at this time, which may cause strong reaction in the markets.

The last argument refers to the leasing of gold by central banks in order to suppress its price. Again, although central banks certainly lease their gold, managing currency reserves is precisely within their mandate and does not prove manipulation. Moreover, the central bankers may simply try to generate a return on their assets by leasing gold, which would otherwise be sitting in a vault earning no income. If there was any manipulation, it would be ineffective, given the bull market in the 2000s. Perhaps, the price of gold affects the scale of gold leasing, not vice versa. The borrowing demand will only remain strong as long as gold is perceived to be in a bear market, because borrowers could only then repay the loan with gold that had dropped in price.

The bottom line is that despite many variations of theory of manipulation in the gold market, their supporters hardly offer any proofs. The gold market is complex enough when considering only true fundamentals, so there is no need to follow unproven suppositions. They are dangerous for investors, since they can expose them to losses. The manipulation theories create elevated expectations that one day the manipulation will end and the price of gold will reach its ‘true value’ over many tens of thousands of dollars per ounce, which may lead to unnecessarily long holding periods and sub-optimal investment decisions (and not exiting the market at all during bear markets). For instance, the above approach could lead to losses even if gold moves substantially higher but not as high as one expects – it’s important to stay open to new information and react to it when it becomes available – staying in any market (even as promising a market as precious metals) without paying attention to its dynamics can be costly.

May 27 The Metals, Money, and Markets Weekly: low volumes = low Prices
May 27 Silver demand and supply trends to watch
May 27 A dis-inflationary whiff and its likely path
May 27 The success of the Fed in curbing economic volatility and what it may mean for gold and silver
May 27 Before you buy any oil stocks, read this