President Obama is the One Peddling Fiction

In his final State of the Union Address, President Obama chided, “Anyone claiming that America's economy is in decline is peddling fiction." Following the recently released February Non-farm Payroll Report, which showed a net increase of 242 thousand jobs, he doubled down on that same contention. The seemingly robust number of new jobs created prompted the President to remark, "The numbers and the facts don't lie, and I think it's useful given that there seems to be an alternative reality out there from some of the political folks that America is down in the dumps. It's not. America is pretty darn great right now."

But the truth is, that headline jobs number for February was very misleading, and it is you, Mr. Obama, who is peddling fiction.

First, even though there were 242 thousand net new jobs created, there were fewer hours worked during the month. The Index of Aggregate Hours Worked shrank by 0.4 points to 104.9, from 105.3 in January. This means there were actually less total hours worked in the economy during February than in January.

It makes perfect sense that this part-time, Uber-driver economy would also produce an average hourly work week that shrank by 0.2 hours, to 34.4; and that average hourly wages declined for the month by 3 cents.

Then we have the labor-force participation rate, or the share of American non-institutionalized civilians over the age of 16 who are either working or looking for a job. This ratio dropped dramatically in the wake of the 2008 financial crisis, yet has also failed to make a meaningful rebound since.

Adding to this number of despondent would-be workers, is the fact that those who enjoy gainful employment have suffered with a lack of real income growth. 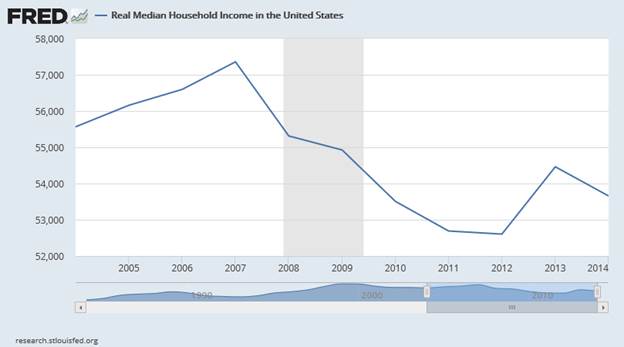 A falling work week, dropping wages and fewer hours worked does not make for a good employment report or a healthy consumer. However, it isn’t just the employment conditions in the U.S. that depict a weak economy.

According to the Census Bureau, a record 46.2 million persons, roughly one in seven Americans (14.2%), currently live below the poverty line. That rate was 12.5% before Obama took office. And we have an astonishing 51 million Americans who live just above this official threshold--making 50% of all Americans living in or near the penury class.

According to government statistics, the rate of poverty for every year under the Obama presidency has been higher than it was for each year during the horrific economic stewardship of George W. Bush’s presidency.

With Americans living less prosperously, it’s not surprising that household debt has increased back to 2007 record levels of $14.1 trillion. Business debt has also ballooned from $10.1 trillion, to $12.6 trillion. And our National Debt boomed from $9.2 trillion, to $19 trillion. And to keep all this debt more palatable, the Fed’s balance sheet has exploded from $880 billion, to $4.5 trillion. All this means the tenuous and anemic state of the U.S. economy is merely held together by the tape and glue provided by the Fed’s artificially-low interest rates.

To be sure, President Obama is clueless about what will happen to the fragile U.S. consumer after interest rates normalize. But once inflation targets are achieved by the Keynesian counterfeiters that run global governments and central banks, interest rates will indeed spike. And then it will become shockingly clear that the economic recovery was just a mirage created by the real fiction peddlers in Washington, Beijing, Brussels and Tokyo.