When perhaps the best hedge fund manager ever puts 30% of his portfolio into one investment we get very interested here at Hedge Fund Insiders.

We focus exclusively on the investments being made by the best managers in the world.  The most compelling opportunities to us are those where one of these great managers takes an extraordinarily concentrated position.

In this case the investor is Stan Druckenmiller who now has 30% of his portfolio in the SPDR Gold Trust.

Compounding Money At 30% Per Year For A Quarter Century

For a 25 year period from 1986 through 2010 Stan Druckenmiller was “the man” in the hedge fund world.  His investment performance was untouchable. 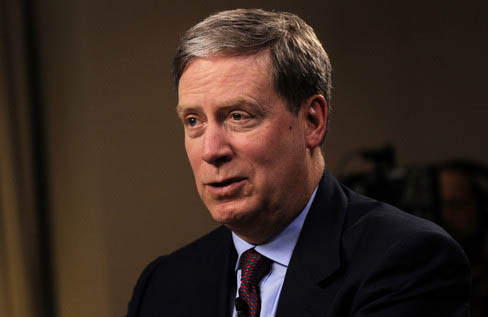 The annualized rate of return for his firm Duquesne Capital Management was 30%.  Even more staggering is the fact that he and his investors did not have to endure a single down year over that stretch.

Think of the different investing environments he navigated through.  A technology bubble, a housing collapse, an Asian flu, the list goes on.   Druckenmiller generated incredible returns through them all.

His investment approach can be generally described as being willing to take a big swing when he is certain that a great opportunity is in front of him.  A concentrated portfolio is generally the only way to create the kinds of returns Druckenmiller generated.  The fact that he invested that way and didn’t have any down years is hard to fathom.

He shut Duquesne Capital in 2010 having tired of the responsibility of managing money for other people.  Today he manages nearly a billion dollars of his family’s money through the Duquesne Family Office LLC.   Because the sum is so large he must still file reports with the SEC.  That is lucky for us because it allows us to track what he is doing.

A High Conviction Investment From A Brilliant Investor

At December 31, 2015 the Duquesne Family Office managed by Druckenmiller reported $977 million of assets.  $292 million or 29.88% of that was invested in the SPDR Gold Trust.

Based on our review of the quarterly filings that entire position was established between April 1, 2015 and June 30, 2015.  During the time that Druckenmiller was establishing the position the price of gold hovered around $1,200 per ounce.

For the second half of 2015 Druckenmiller’s gold investment didn’t look too smart.  The first couple of months of 2016 have changed that.

While we focus exclusively on investments being made by great investors like Druckenmiller we won’t blindly follow anyone into anything.  We need to understand why each particular investment is attractive.

In this case Druckenmiller tipped his hand when he gave a speech during Q2 2015 where he said the following:

“Our monetary policy is so much more reckless and so much more aggressively pushing the people in this room and everybody else out the risk curve that we're doubling down on the same policy that really put us there (in the 2008 financial crisis) and enabled those bad actors to do what they do. Now, no matter what you want to say about them, if we had had five or six percent interest rates, it (the housing bubble) would have never happened because they couldn't have gotten the money to do it.

This is crazy stuff we're doing. So, I would say you have to be on alert to that ending badly. Is it for sure going to end badly? Not necessarily. I don't quite know how we get out of this, but it's possible.”

Given that nearly 30% of the Duquesne Family Office is now invested in gold, we don’t have to use our imaginations to figure out where Druckenmiller believes the safest place to retain value is.

In November 2015 Druckemiller appeared at the annual Dealbook Conference and again repeated his concerns about Central Bank policy.  While he notes that the U.S. Federal Reserve did a great job of keeping the economy afloat back in 2008 and 2009 he can’t understand why emergency financial measures are still in effect seven years after the fact.

Druckenmiller believes that years of easy money policy have caused all kinds of unusual behavior.  He points to corporations borrowing vast amounts of money at ultra-low rates to buy back stock despite share prices being at all time highs.  He points to emerging countries like Brazil and Turkey behaving in ways that would never happen with normal interest rates.  And he points to every investor in the world be pushed way out on the risk curve trying to achieve some yield.

Druckenmiller believes that ultimately this unnecessary monetary policy and unusual risk taking by investors will result in the “chickens will coming home to roost”.

Given his track record, him putting that much into gold is likely something we should all be paying attention to.  At Hedge Fund Insiders we are always paying attention to what the few really great investors like Stan Druckenmiller are doing.

The core belief at Hedge Fund Insiders is that the retail investor is making a mistake trying to compete with professional investors.

A retail investor can dedicate a few hours a week to investment research. The top funds can dedicate hundreds of man hours researching a single idea as well as spend millions on third party research.

Instead of competing against the top funds, we suggest profiting from them. The complicating factor is that these funds have large minimum investment requirements and are only available to the wealthiest 1%.

That is where we come in. We level the playing field for the retail investor by studying the portfolios of the top hedge funds and digging out their very best ideas.