Precious Metals and Crude Oil - What Can We Infer from This Relationship?

Although the world's largest oil-producing countries met this weekend in Doha, they failed to reach a deal to freeze output at Jan levels as Saudi deputy crown prince Mohammed bin Salman sustained earlier statement that Saudi Arabia would freeze the level of its oil production only if all other major producers (including Iran) did the same. Although Iran supported the freeze, the country didn’t agree to cut production until it raises its output to around 4 million barrels per day (to the pre-sanctions levels). What does it mean for crude oil? In our opinion, such developments suggest a renewed battle for crude market share, which would likely translate into lower values of the commodity in the coming days or even weeks. Will our interesting ratios confirm this scenario? Let’s jump right into charts (chart courtesy of http://stockcharts.com) and find out. 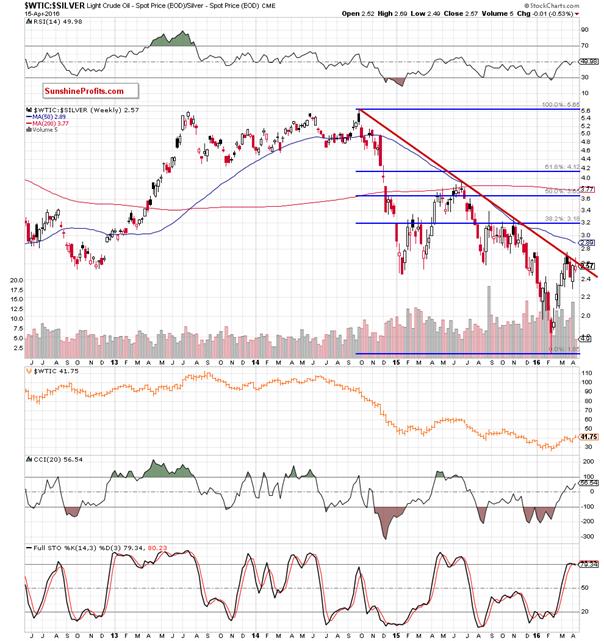 On the above chart, we clearly see that although the ratio moved slightly above the long-term red declining line, this improvement was only temporary and the ratio reversed, closing the previous week under this key resistance – similarly to what we saw several times in the past. As you see in all cases, oil bulls were not strong enough to push the ratio higher, which resulted in reversal and declines – not only in the ratio, but also in crude oil. Therefore, looking at the above chart, we think that anther reversal is just around the corner – especially when we factor in the fact that the Stochastic Oscillator is very close to generating a sell signal, which is another negative signal.

Having said the above, let’s take a closer look at the gold-to-oil ratio. 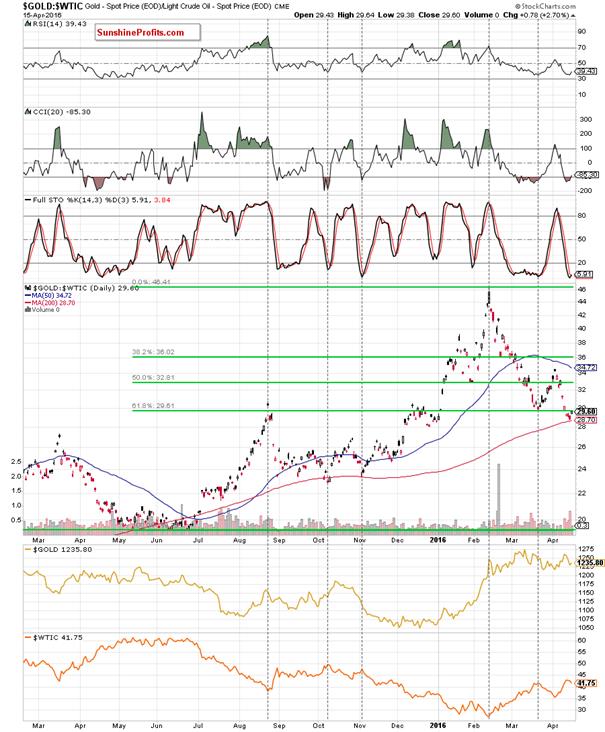 The first thing that catches the eye on the above chart is strong negative correlation between the ratio and the price of crude oil. In the previous week, the ratio declined to the 200-day moving average, which in combination with the current position of the CCI and Stochastic Oscillator suggests that another reversal in the coming day(s) is very likely. Why? When we examined the above chart, we noticed similar situation in Oct and Nov 2015. Back then, such combination encouraged bears to act, which translated into higher values of the ratio and declines in crude oil. Therefore, if the history repeats itself once again, we’ll likely see another downward move in light crude.

Finishing today’s article, we would like to draw your attention to the non-USD (WTIC:UDN ratio) chart of crude oil. As a reminder, UDN is the symbol for the PowerShares DB US Dollar Index Bearish Fund, which moves in the exact opposite direction to the USD Index. Since the USD Index is a weighted average of the dollar's exchange rates with world's most important currencies, the WTIC:UDN ratio displays the value of crude oil priced in "other currencies". 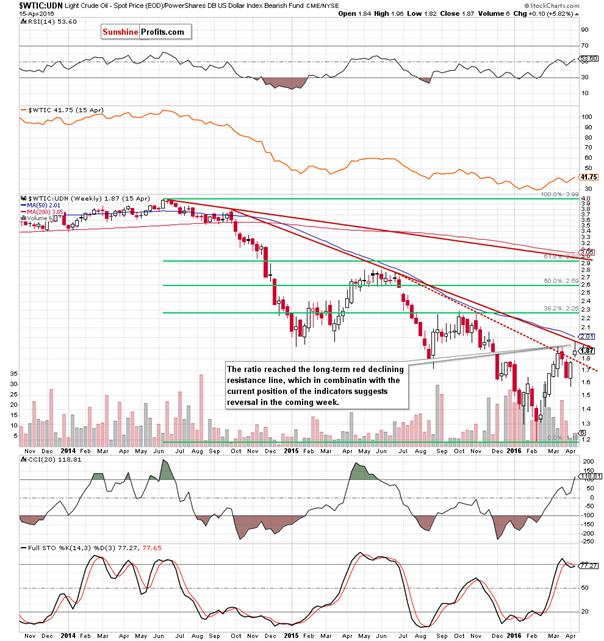 From the medium-term perspective, we see that the red dashed resistance line stopped oil bulls and triggered a pullback, which approached the ratio to the 50% Fibonacci retracement earlier this month. Despite this drop, WTIC:UDN rebounded, invalidating earlier breakdown under this line, which resulted in an increase above the March high and a climb to the long-term red declining resistance line (based on Sep 2014 and Jun 2015 highs). Taking this fact into account, the proximity to the 50-week moving average and the current position of the indicators, we think another downswing is just around the corner.

Summing up, as you saw on the above charts, all our ratios suggests that lower values of crude oil are more likely than not. This scenario is also supported by the fact that all hopes of agreement between OPEC members and Russia to freeze output faded after weekend’s failure, suggesting a renewed battle for crude market share and lower values of the commodity in the coming days or even weeks.