Why One Analyst Believes Gold Could Hit $3,000 an Ounce

After finishing its best quarter in 30 years, gold extended its gains, rising more than 17.2 percent year-to-date to become the best performing asset class among other commodities, U.S. Treasury bonds and major world currencies and equity indices.

We are likely entering a new gold bull market, writes the World Gold Council (WGC). If so, it would be the first time since the previous one concluded in September 2011, when the metal reached its all-time high of $1,900 per ounce. Since 1970, we’ve seen five gold bull markets, each one lasting an average 63 months and returning an average 385 percent, according to the WGC.

Now, as reported on Mining.com, one precious metals analyst predicts gold could rise to $3,000 within the next three years. Speaking at the Dubai Precious Metals Conference this week, Dr. Diego Parrilla, coauthor of the book “The Energy World Is Flat,” stated that “a perfect storm for gold is brewing” as uncertainty over global central bank policies is deepening. We might have reached the limit of what quantitative easing (QE) programs and negative interest rate policies (NIRP) can accomplish.

Three thousand dollars might be an overstatement, but several prominent financial institutions, including HSBC, RBC Capital Markets and Credit Suisse, are currently bullish on the metal.

For the 12-month period as of April 13, our Gold and Precious Metals Fund (USERX) was up 31.96 percent, while the World Precious Minerals Fund (UNWPX) returned 36.34 percent. This puts us ahead of the funds’ two benchmarks, the FTSE Gold Mines Index and NYSE Gold Miners Index. 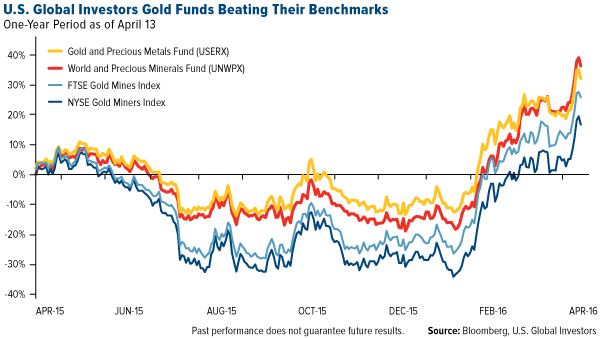 I’m also pleased to say that as of March 31, USERX continues to hold its overall four-star rating from Morningstar among 71 Equity Precious Metals funds, based on risk-adjusted returns.

Drivers of Gold: The U.S. Dollar and Real Interest Rates

The U.S. dollar has been weakening relative to other major currencies, recently hitting an 11-month low of 94.06, down 4.8 percent year-to-date. Gold is priced in dollars, so when the greenback drops, the yellow metal becomes less expensive, and therefore more attractive, for buyers in other countries.

More meaningful to price movements, however, are negative real interest rates. When inflation picks up, making short-term government bond yields drop below zero percent, savvy investors turn to other so-called “haven” assets, gold among them. This is what I call the Fear Trade. In September 2011, when gold hit $1,900, the real fed funds rate was sitting close to negative 4 percent.

Zero Hedge found that since 2008, the correlation between gold prices and real negative rates has been particularly high, adding:

As of April 11, the 2-year Treasury yield has contracted 93 percent in 2016, the 5-year yield more than 32 percent. This doesn’t take inflation into account, which takes a further 2.2 percent from these yields, based on the most recent consumer price index (CPI) reading. 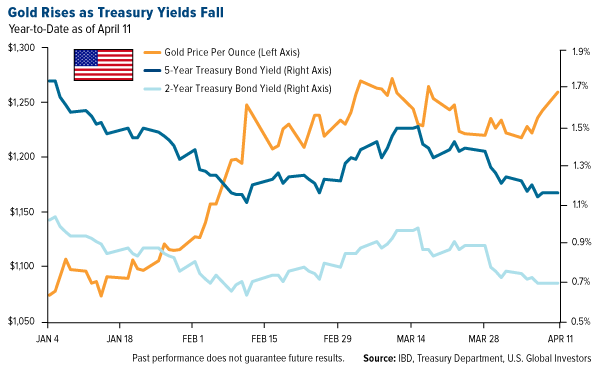