Gold Stands Aside for Silver's Up-Ride

Gold settled out the week yesterday (Friday) at 1233.7. Why the decimal point precision? Because Gold also settled at that exact 1233.7 level some two months ago on 25 February, upon which day Silver settled at 15.140. Yet yesterday, Silver settled at 16.985, 12.2% higher versus Gold's net 0% change for the same period. Here are those percentage tracks from 25 February-to-date: "Hi-yo Silver! Away!"

'Tis been that "Enchanted April" for Gold, thus far being kept aloft from a re-test of the 1190s area by a supportive foundation of bids. But for Silver, 'tis been a "Power Plant April", a long overdue re-energizing of the white metal for which price this past week returned up into the 17s for the first time since last June. As noted back in our 26 March missive: "But upon getting a substantive Precious Metals bid [which on balance Gold certainly has had this year], watch for Silver's price growth on a percentage basis to rocket past that of Gold." Bang.

Nice to see your focus expanding beyond the near-term minutia there, Squire. Indeed, 'tis the rub: the year's percentage progress for both Gold (+16.3%) and Silver (+22.9%) are clearly impressive as we glide toward the end of 2016's first trimester. However, from our "Change=Illusion, Price=Truth Dept." current Precious Metals levels remain terribly slight considering the compounding of currencies, stilted insanity of stock indices, and derelict distension of derivatives. Some would say our own Gold Goal of 2000 is rather "understated", especially given the math which values price at 2562 right now per the above opening Gold Scoreboard. But 'twill pay to keep abreast of the following:

To be sure, our oft-stated "inevitability" of Gold rising up through 2000 has yet to happen; so too, the "unsustainability" of the stock market's rising has yet to happen. Because these two phenomena have been on hold, not just for months, but rather now for years, one has to wonder per our pet phrase "when it all goes wrong" if 'twill be on a scale more massive than we've ever seen. As maverick of the markets Phil Grande said a week back, "The stock market is going up because the economy is bad". True enough. But stock markets cannot survive solely on dovish central banks, their outright monetary accommodation, negative depository rates, and corporate stock buy-backs forever. So when everyone suddenly wants to get their hands on their dough at the same time, even upon the S&P 500 then halving itself, 'twill only have revalued itself in line with real earnings. Listen not to all the whoopeeee, just do the math on your HP-12C, and you too will then go "OMG!" See? Here's the Economic Barometer:

Next to Gold's weekly bars, wherein the present parabolic Long trend run of 14 weeks is of the most duration since that ending 11 December 2009, better than six years ago. But as below shown, price is now becoming crunched between the rising blue dots and the 1240-1280 resistance zone. Note as well the low closing "nubs" of the two rightmost bars, indicative of Gold's being unable to sustain its last two intra-week gains. The Federal Open Market Committee could wreck Gold's run on Wednesday with an interest rate rise, (that'd be cute). "Jobless Claims are now their lowest level in recorded history!" Rubbish. Either way, at least the dashed trend line across the chart is noticeably turning up:

As for our four criteria to determine "how we'll know when the bottom is in", (said bottom referencing last year's low of 1045 on 03 December), Gold essentially must leap higher now, (and ideally clear the 1240-1280 resistance zone), else face tripping the weekly parabolic trend to Short, dare we say in fairly "short" order, (as the next rising blue dot in the above series would be in the upper 1220s). And with respect to the 300-day moving average, it actually has been ticking higher these last few days, but only microscopically so such that 'tis not really apparent on the chart. Here's the present state of those four criteria:

Again, we next view Sister Silver's recent surging performance in contrast to the more churning, albeit supported, trading of Gold. This two-panel chart of daily bars for the past three months-to-date, along with the "Baby Blues" depicting the evolving consistency of 21-day linear regression trend, presents Gold on the left and Silver on the right:

Now we zoom in on these two markets' respective trading profiles. For Gold (left) the 1252-1256 area has built in a price-repelling look. For Sister Silver (right), clearly she's higher up in her profile than is Gold in its, but the chasm from here down to 16.20 appears formidable:

Elsewhere economically, and somewhat in line with our declining Econ Baro shown earlier, the projected 2017 growth for Europe's biggest economy -- Germany -- has been reduced to 1.5%, their Vice Chancellor and Minister for Economic Affairs and Energy Sigmar "Go Goslar!" Gabriel pointing to global economic fragilities. Whilst over in the Land of the Rising Sun, they've the Trend of the Falling ¥en, Japan's currency taking its largest weekly fall (inversely from ¥108.6 for a buck to ¥111.7) since that ending on Halloween 2011. The talk there is, assuming you are a bank, the Bank of Japan will pay you to borrow their money! Wow! Our recommendation? Google "How to set up a Japanese bank charter" today!

Toward closing, let's return for a moment to the stock market. The FinTimes just wrote about recent Index highs for the year boosting sentiment to buy stocks. Dow Jones enumerated on its wires four forces that are lifting the S&P 500 toward a breakout. Back to the quintessential lemming effect: if it feels good, do it, because everyone else is. Obviously no one is paying heed to either the Earnings Season page at the website, nor its S&P 500 valuation/moneyflow pages. None are pretty; rather the data there are downright scary. Moreover, a one-half percentage point reduction in hedge fund coffers during Q1 may not seem like much, but 'twas the largest quarterly outflow since the Black Swan Event bottoming in 2009; "exorbitant fees" are being blamed, but you and I know better than that.

Further problematic to owning equity without sanity is that -- given generational turnover -- 'tis today millennially-assumed that not being in the stock market is like trying to survive sans oxygen. You're always supposed to be in it. To wit, there's some new no-trading fee brokerage "app" called Robinhood. 'Tis specifically targeted toward non-financial folks who find themselves too engaged in their busy lives to deal with the rigors of stock market analysis. So just go with your gut, tap and buy. 'Tis so easy! Puts us in mind of an image from MarketWatch this past week, courtesy of FactSet/Shutterstock: 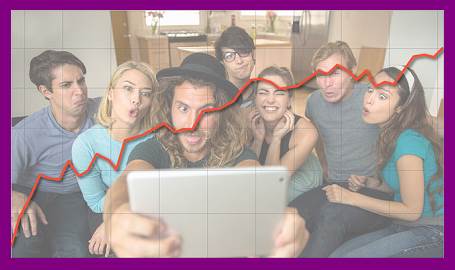 If that ain't the sign of a stock market top, I don't know what is.

Anyway, in addition to the FOMC "non-press conference" Policy Statement due Wednesday, the economic calendar is hefty and backloaded toward week's, indeed trimester's, end. Watch the Baro!

Finally with that dreaded mid-April day now behind us, as a StateSider, were you one of the 55% that paid federal income tax for 2015? If so, did someone from the non-paying 45% send you a thank-you note? No? Well, at least be thankful you've got Gold ... and Silver!