On June 23rd, Britain will vote on a referendum to remain or leave the European Union (EU).  The referendum is known as Brexit.  If Britain votes to leace the EU, gold has potential to jump about $120 in one or two days.

It is understandable that the first reaction of many investors is to buy gold, but should you buy gold for the short-term for Brexit based on rigorous analytical analysis and not just on an opinion?  Let us examine the question in the following sections of this article. 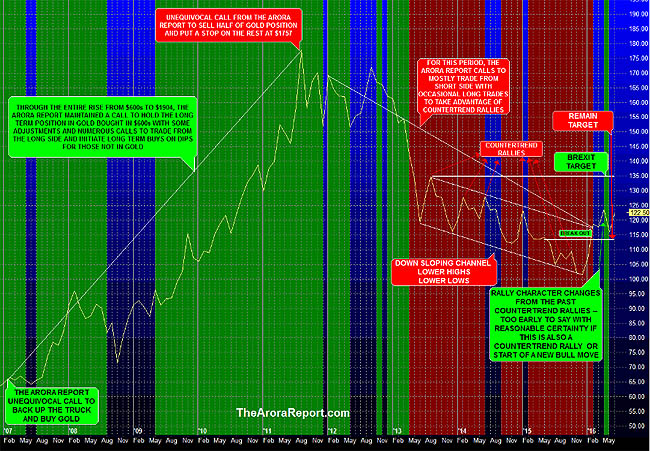 The annotated chart shows the logical Brexit target which is the first major resistance. The chart is of the ETF GLD.  Equivalent target for spot gold is about $1400.

If the vote to exit is by a big margin or other favorable events occur at the same time, expect gold to shoot through $1400 like a hot knife through butter.  The reason is that in futures, many short sellers will likely have their stops just above $1400.  Hunt and destroy algorithms will take these stops out moving gold to $1410 to $1420 range.  There is an upside of about $120 here.

When thinking of reward, astute investors also think of the risk at the same time.  The risk in buying is that Britain may vote to remain in the EU.  In such an event the chart shows the down side target for gold.  This is the first major support.  Equivalent in spot gold is about $1209.  Gold may first fall to $1200 where buying will likely come in causing a small bounce to about $1209.  There is a down side of about $80.

Simple Risk Reward Is Not Real

From the chart, there is a reward of about $120 and risk of about $80.  On the surface this seems like a favorable risk reward, but this is not real and no decisions should be based on this simple calculation. The reason is that the probabilities of ‘remain’ and ‘leave’ are not the same.

To be consistently successful, all investment decisions should be based on probabilities.

Polls had been running about even on both sides.  Over the last couple of days, momentum seems to shift towards ‘leave.’  Polls are very volatile and the momentum may have changed by the time you read this article.  The best way to gage momentum and its direction is to look at a futures chart of British pound vs. U. S. dollar.

From the foregoing, the composite probability after giving due weight to the past accurate track record of the bookies and making an adjustment for the momentum, the probability of ‘leave’ is about 42%.

This means probability of making about $120 on a long position is about 42%.

The probability of losing about $80 on a long position is about 58%.

The conclusion of the analysis is that probability adjusted risk reward is a coin toss between buying gold here and selling gold here for the very, very short-term.

Most investors who are used to opinions without rigorous probability based analysis will be interested to know that here the result of the rigorous analysis is very different from a typical opinion to buy.

To be consistently successful in the long-term, investors are well advised to pay attention to what has come to be affectionately known as Nigam’s Second Law of Investing, ‘No one knows with certainty what will happen next!’  For this reason, to be consistently successful over a long period of time investors should consider making decisions on rigorous probability based analysis and not based on opinion

For those considering long-term gold holding based on Brexit, many additional factors come into the picture.  This will be the subject of a separate post.

Current Ratings On Gold And Silver.

The ratings on gold and silver at The Arora Report are generated by complex algorithms that automatically change with market conditions.

The background colors on the charts are automatically generated by a combination of some of our algorithms; green is bullish, maroon is bearish, and blue is neutral. The chart analyzed here is a daily chart.  Similar signals are automatically generated on yearly, quarterly, monthly, weekly, hourly, and 15 minute charts.  Combination of these signals is then input into another algorithms that has many additional inputs such as relationship between currencies, interest rates, sentiment, money supply, global geopolitical picture, global GDP growth, inflation in key countries, leading indicators of inflation, risk appetite, etc.

Some of the inputs are adaptive, i.e., their weight changes based on conditions and co-relations. The adaptive nature of the algorithm has been the most important reason behind consistently accurate calls on gold and silver by The Arora Report over the years.  Experience has shown that algorithms that are static stop working after a while because market conditions change.   For this reason, investors and traders should avoid algorithms that are fixed.

Of course, our timing models on gold and silver are much more sophisticated and take into account many more factors.  Here are our current ratings.

Brexit is a binary event, for this reason short-term ratings have been temporarily suspended.