How Will a Brexit Vote Impact Gold and Silver Prices? 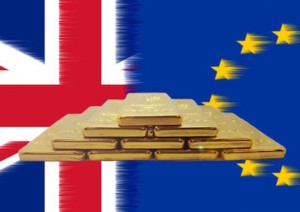 The June 23 referendum on whether or not the UK should leave the EU is fast approaching. New polls show that those favoring a leave vote or “Brexit” are leading by 10 to 20 points.This has sent ripples through the markets, as a Brexit is likely to cause economic chaos in the EU, cripple European banks and lead to a Recession.

It is not that voters in the United Kingdom want nothing to do with the EU. Instead, they prefer a mutually-beneficial economic relationship, rather than an economic and political arrangement with the Europenan Union:

“Clearly we can be free, have more democracy and be better off if we ditch or cancel our EU membership, and join a Free Trade Agreement like the one people thought they were voting for in 1975.”

A recent poll ‘The Independent’ shows that 55 per cent of UK voters intend to vote for Britain to leave the EU, by far the biggest lead the Leave camp has enjoyed since ORB began polling the EU issue for The Independent a year ago. Back then, those wishing to stay had a 10-point lead, so the tables have completely turned.

Still, polling experts are quick to point out that there has been a late swing to the “status quo” option in previous referendums, including the one on Scottish independence in 2014. They also point out that telephone polls consistently give the Stay vote a higher rating than online surveys dominated by more youthful voters.

Several European banks including UBS WM, Citigroup, IHS, SocGen and Eurasia put the odds of Brexit much lower than polls, estimating 30% to 40%. Of course, the banks benefit from the UK remaining in the EU and the centralization of banking power, so their projections are not exactly objective.

While the power elite are concerned about the impact to the economy, they are much more concered about contagion. Several other nations may feel emboldened by a BREXIT vote and decide they also want to leave the failed experiment known as the European Union. While economic alliances, trade and commerce make sense, cedeing sovereinty is probably not the wisest move for nations wishing for the economic boost.

Given that a Brexit would decentralize power and disrupt the power elite, I think the referendum is likley to be rigged in favor of the UK staying within the EU. There is simply too much at stake to allow the people to have a say. We have seen the same type of voter suppression in the United States Presidential election. It is nothing new.

Investors will be watching closesly on June 21, two days before the referendum. On this evening there will be a debate that will help to sway undecided voters.

How Will Brexit Will Impact the Gold and Silver Market?

Many analysts believe that if Brexit happens, gold and silver prices will soar. Investors will pull their money from the stock marekts and banks, seeking safe-haven assets instead. If the Euro currency plummets, they will also look to get out of cash and into real money such as gold and silver. These fears are also part of the reason for the sharp rise in crypto-currencies, such as Bitcoin and Ethereum.

“Brexit would be very beneficial for shorting sterling and we will probably see a big pick up in gold. In that scenario we think gold could hit $1,400 [an ounce],” he said on the sidelines of the Inside ETFs Europe conference in Amsterdam.

“We’ve looked at previous risk events and for instance when Greece nearly left the Eurozone [in the summer of 2015] we saw really elevated futures positioning. We are making the assumption that we would see net longs for quite an extended period of time in gold in a Brexit scenario,” he said.

Butterfill said ETF Securities has seen an inflow of $2.6 billion into gold this year, boosting the metal’s share of the company’s asset under management to 14%.

“I think it has happened for various reasons. One is Brexit, another is a non-establishment presidential candidate in the U.S.,” he said, referring to the presumptive Republican presidential nominee, Donald Trump. He said the other concern is the Federal Reserve’s interest-rate policy, which appears to be on track to remain unchanged for the near term, a fact that would be supportive to gold prices.

“These are three quite significant risk events, so that’s why we are seeing popularity with gold,” Butterfill said. “That also means a rally to $1,400 an ounce would have legs and not just translate into a short-term shaven trade.”

“I was actually surprised when [Fed Chairwoman Janet Yellen] mentioned Brexit for the first time in her speech last Monday. It’s clear they are thinking about how much instability it creates. The implications could have a domino effect with other fringe parties around Europe pushing for a referendum. It’s not a nice investment environment,” he said.

TD Securities looks for gold to surge higher if U.K. voters decide on June 23 to leave the European Union. If there is a BREXIT, TD Securities expects:

“…gold to trend past the recent highs and move toward $1,392/oz, with the more volatile silver testing the $20/oz mark,” the firm says in a research note just ahead of the weekend. “However, should the vote be to remain in the European union, a swift correction but no rout would ensue.”

Even if the U.K. stays in the EU, any pullback in gold may be limited as the FED rate hike trajectory has slowed considerably. CME’s FedWatch tool puts the odds of a June rate hike at just 2% and a July hike at 21%. The odds go up when asking if the FED will hike by year end, but even then the odds are only 59%. This is down considerably from a few months ago when everyone was sure the FED would hike rates at least once and likely two or more times in 2016.

Furthermore, even if the FED decided to raise rates by 25 basis points, this does not necessarily point to lower gold and silver prices. In fact, the current rally in precious meatls started just after the FED hiked rates in December. And history shows repeated patters of gold and silver price climbing along with interest rates.

So the market has been a bit irrational with high expectations that the FED would follow through on their rate hike talks. And even more irrational to assume that a slow climb in interest rates is negative for precious metals. After the 4-year correction to lows at or below the cost of production, this rally off deeply oversold levels was long overdue.

How to Maximize Profits in the Gold Market

Investors can take advantage of this irrationality via buying the dip in gold and sivler everytime that Yellen yaps about raising interest rates. People keep falling for this FED trick by panicking out of their PM positions and you can step up and purchase their metals or shares at a nice discount. We do this with the conviction that precious metals are in the early phases of a multi-year bull run after the long correction.

I expect the gold price to climb towards $1,500 and silver to $20 even if the UK votes to remain in the EU and the FED raises rates. But if there is a Brexit, contagion and/or failure to raise rates, the sky is truly the limit for gold and silver. Under these conditions, I would not be surprised to see gold climb above above $1,600 and silver above $27 by year end.

While I expect the gains in gold and silver over the next 12 to 24 months to be very powerful, quality mining stocks are going to be where the real money is made. So far in 2016, mining stocks have been offering leverage of more than 4X the underlying move of the metals. Some of our favorite mining stocks are up 200% or more year to date.

For example, our top silver stock pick is up 270% this year. While many investors are hestitant to buy after such a big move, mining stocks are bouncing off drastically oversold lows. This particular silver stock would still need to climb another 540% to reach 2012 highs and they have more than doubled their silver resource since then. In my view, the upside potential dwarfs the downside risk, even after the huge move this year.