The Alignment Of The Dow, Interest Rates, Debt and Silver Cycles Will Deliver A Fatal Blow

Since the inception of the debt-based monetary system (with its fractional-reserve banking), the banks have been playing a nasty game of Russian roulette. The only reason that the system has not blown-up is because the relevant cycles have not adequately lined up to deliver a fatal blow.

They have been allowed to play it long enough, and it now appears that the fatal blow will be delivered soon (just like Russian roulette when you play it long enough). The coming Dow crash is the likely trigger that will deliver this blow.

Below, I have three charts to show how the timing of current major Dow peak, perfectly lines up with some key turning points in the markets. These suggest that the coming Dow crash will be the worst ever.

Below, is a chart of interest rates on the 10-year treasury bonds, since 1900 (R Schiller Online Data): 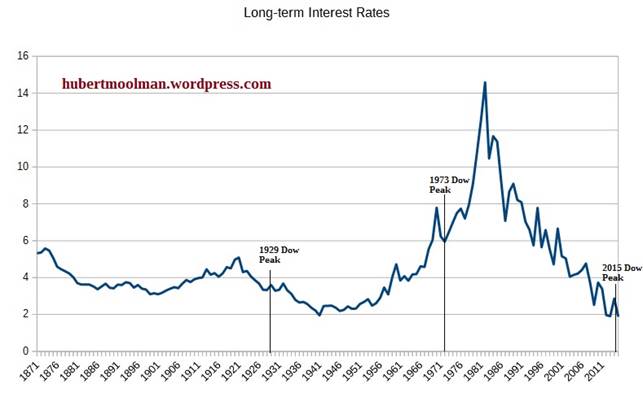 Therefore, based on the relationship of the Dow and interest rates, the closeness of the turning points mentioned spells disaster for the Dow.

So, if the 2015 Dow peak and 2012 interest rates bottom is valid, then the coming decline of the Dow could be disastrous, since the increasing interest rates will further fuel the decline.

Below, is a long-term chart of US Total Credit Market Debt as Percentage of GDP (from wnd.com): 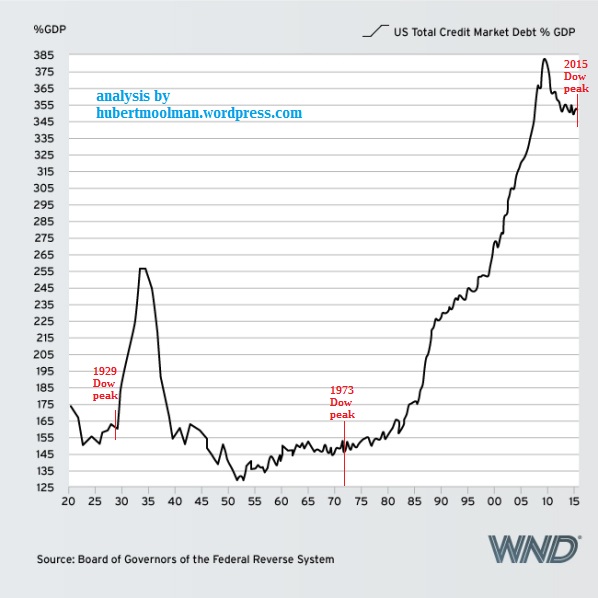 On the chart, I have marked the three major Dow peaks (1929, 1973 and 2015). The most important thing to note is the fact that the 2015 Dow peak occurs when this ratio is close to its peak, whereas the 1929 and 1973 peaks occur nearer to the bottom. In other words, the 2015 Dow peak occurs at a time when debt is at its most overvalued, whereas the other two peaks occurred when debt was relatively undervalued.

This means that the current Dow peak occurred at a time where it is more likely that credit could collapse, and also where it becomes more difficult to extend more credit. Again, collapsing credit will be like a strong wind, hindering any rise in the Dow, but providing a huge boost to any fall. It is my view that the coming credit collapse will be more like a nuclear wind (this is since credit is so pervasive in the economy today), destroying anything that derives its value from debt.

The crash that followed the 1929 Dow peak was extremely bad, since the Dow lost more than 88% of its value. That crash did not have a “strong wind” helping it on further. With more ideal crash conditions, the coming crash will likely far exceed the 1929 crash.

Below, is a long-term chart of the Gold/Silver ratio (from macrotrends.net): 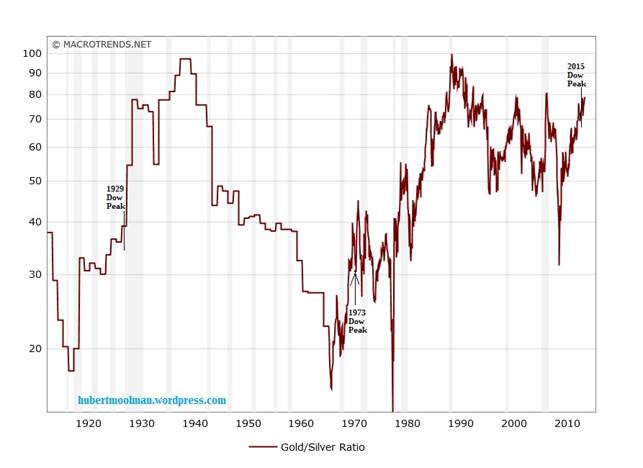 Again, on the chart, I have marked three major Dow peaks (1929, 1973 and 2015). Notice how the 2015 Dow peak occurs closer to the peak in the Gold/Silver ratio. In a previous article, I wrote about how the debt-based monetary system has created what I call a “mirror-effect”, whereby silver  is pushed down in value, to a similar extent as to which paper assets such as general stocks are pushed up in value.

For more on this and this kind of fractal analysis, consider learning more about my premium service.