The Stock Market, Iron Ore, Bitcoin - Is Silver Next for Chinese Momentum Investors?

The roulette game all started in the fall of 2014, about 2 years after Chairman Xi Jinping came to power and became the General Secretary of the Communist Party of China.

Xi Jinping had campaigned for socialist economic reform, including a sweeping anti-corruption drive, cutting excess production capacity, tightening of housing credit, and clamping down on gaming in Macau. Public feedback was initially positive. However, largely as a result of those policies, Beijing was facing an increasingly grim economic growth outlook which was the worst in more than two  decades*. Manufacturing activity in China slowed along with the global economy and the construction sector stagnated.

In late 2014, the light bulb came on – someone in the higher echelon ranks thought the stock market could be a penicillin to the economic and social malaise. The stock market is easily accessible to the public and can serve to fill/occupy their free time. A rising stock market provides a desirable savings vehicle (as opposed to low yield bonds), enables listed companies to raise capital and invest, while local governments and banks can piggy-back on the taxes and fees generated.

“State-run media in China are trying to do something the securities industry has failed to accomplish for much of the past three years: get the world's biggest population to buy more stocks.

The Xinhua News Agency published at least eight articles this week advocating equity investing after similar stories appeared in the People's Daily newspaper and on State-run television last month, part of what Everbright Securities Co said is an increased government push to bolster the market. Authorities have also cut trading fees, made it cheaper to open new accounts and organized investor presentations by the biggest listed banks…”

The banks started margin lending, a practice that’s has been prohibited since 2007.

The results speaks for themselves:

In the aftermath, the government stepped in and since July 2015 purchased stocks, banned short selling, banned IPOs, and restricted insider selling. All this did was drive speculators away from the market with volumes collapsing.

In early 2016, as Chinese economic growth and fundamentals continued to worsen, the government turned back to what had worked during the 2009 slump: aggressive lending in the property and infrastructure sectors in Q1 2016 provided relief, and revived the housing market and construction industry. It also sparked speculation away from the stock market and into the iron ore/steel commodity sector.

According to an article in the Financial Times:

“The commodities futures market is the most equal in China,” avows one successful trader, before admitting to one drawback: “It’s difficult to meet women.”

To set up a commodity futures brokerage account in China, an individual needs to provide their identity, in some cases with a video verification, and bank details. A deposit is needed to start trading.

Morgan Stanley estimates 160,000 new accounts were set up online between July 2015 and February 2016. Individual investors tend to be most active when markets are rising, and have dominated past rallies in Chinese futures. 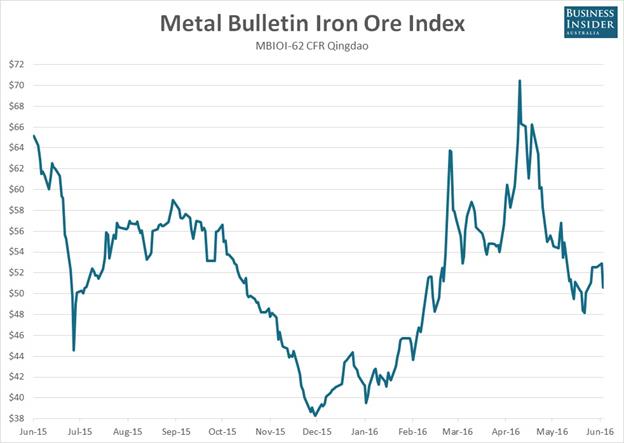 According to an article published by Business Insider Australia on March 9:

“…the equivalent of 977 million tonnes were traded on the Dalian exchange on Wednesday [March 9, 2016]. Not only was it the highest daily turnover on record, it exceeded the entire amount of physical iron ore imported by China over the past year.

In the 12 months to February, China imported a total of 962.6 million tonnes of an iron ore, the largest year-on-year total on record.

If the level of turnover recorded in Dalian futures on Wednesday was to be replicated over the course of any one typical trading year, it would equate to around 240 billion tonnes of ore.”

The annual world production of iron ore was 3.22 billion tonnes in 2014, according to Wikipedia.

The government stepped in, and since May, has raised margin requirements, increased trading fees, and imposed daily movement limits. Excessive speculation on property and commodity sectors, and the undesired restarting of marginal iron ore mines and steel mills have prompted the government to issue a warning on the state-owned People's Daily which said, on Monday, May 9, that China's economic trend will be "L-shaped", rather than "U-shaped", and definitely not "V-shaped". Speculators promptly retreated from the iron ore market resulting in crashing price and volume.

The following chart shows where speculators turned to: 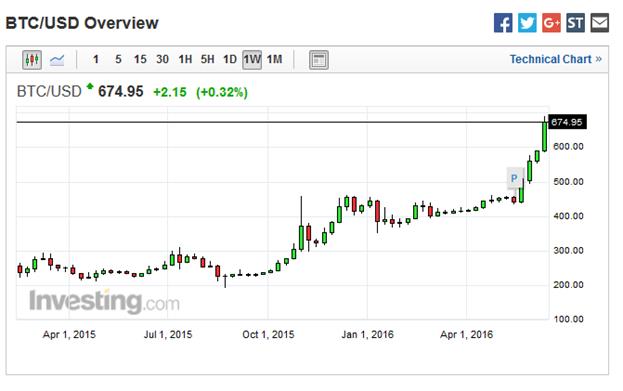 According to a Bitcoin Magazine article dated May 31, 2016:

“Huobi and OKCoin, the two largest Chinese exchanges that now account for some 92 percent of Bitcoin global trading by (self-reported) volume, both reported almost double the usual trading volume over the past weekend. BTCC, China's third largest exchange, also reported a surge in bitcoin trading volume, setting a new record on its Pro Exchange.”

Huobi’s CEO, Leon Li said that: “More and more Chinese investors and their hot money need a new investment market, and a convenient alternative investment like Bitcoin is easy to be accepted by the traders.”

Given its impossible to curb bitcoin trading, and with limited bitcoin supply, I would not be surprised at all if Bitcoin approach US$1,000+/BTC in the near term.

Curiously, if a crypto-currency without intrinsic value can muster such popularity, why not speculate on gold and silver?

Particularly silver, as it stands out as a “poor man’s gold”, ideal for action seeking, trigger-happy Chinese investors.

Indeed, open interest in silver on the Shanghai Futures Exchange has been steadily increasing this year, with open interest now roughly equal and equivalent in size to that of COMEX. 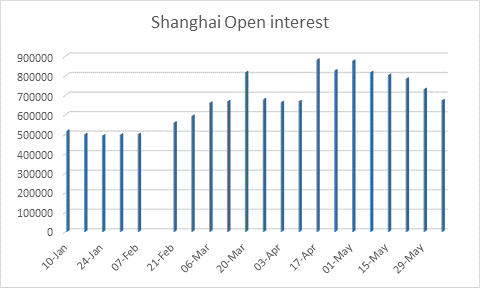 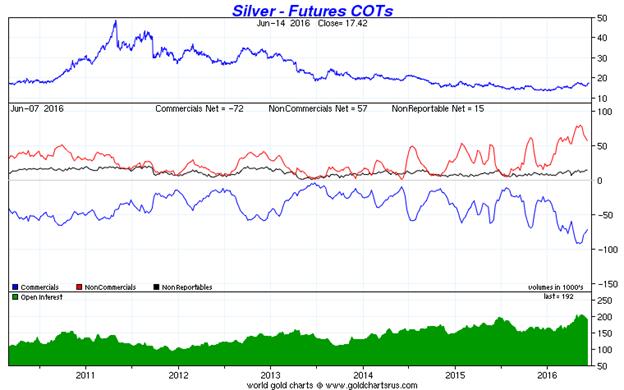 What is the take-away?

They may not arrive at silver this month or the next, but I soon suspect they will buy into this compelling, easy-to-understand investment choice. I own physical silver and manage a company engaged in silver exploration. 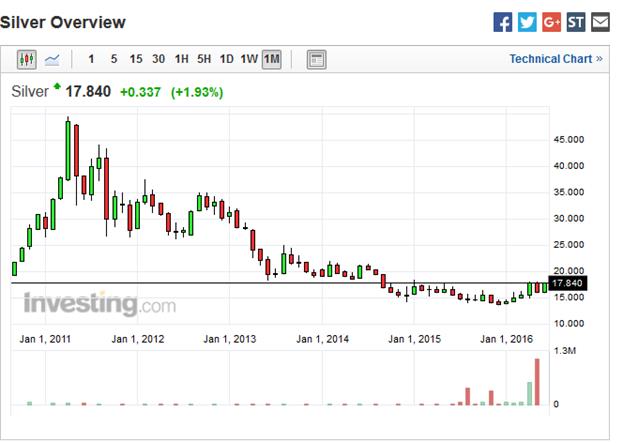 Jun 29 Bitcoin in Bearish Trend, but May be in Last Stretch
Jun 29 Gold is in Consolidation, Testing Bearish Formation
Jun 29 Recession is coming. Should you be concerned?
Jun 29 Is a Crypto Crackdown Good, Bad, or Both?
Jun 29 Recession Question Answered