What's Next for Gold after the FED, With Brexit around the Corner?

What a wild ride gold has seen over the past month and a half after being down 10 sessions out of 11 and then reversing course and going up 8 out of the next 9 sessions. The bears seemed to have had full control of the situation after we saw several solid employment reports, a pickup in manufacturing and inflation data ticking upwards. A rate hike was surely in the cards. Then June 3rd was the reality check gold bugs needs to turn the ship around. Let’s dig into the technicals

Aug Gold blasted through $1300 in the overnight and showing some healthy signs of a possible new wave continuation. ADX has turned up through 40 showing healthy strength to this latest bull run. Stochastics have gone into overbought territory and MACD has crossed over to a positive note.

The chart below is provided by RJO Futures PRO, an exclusive and sophisticated online trading platform with integrated tools to seamlessly trade and monitor the markets. 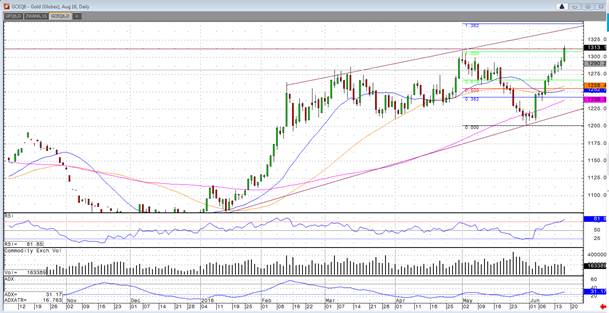 Quickly looking back at the FED

The median interest rate forecast for end-2016 was left unchanged at 0.9%. Reasons for this decision include an underwhelming jobs report and the nearing "Brexit" vote. “It is a decision that could have consequences for economic and financial conditions in global financial markets,” Fed chair Janet Yellen said in her press conference. Based off of this information, it would be reasonable to expect a rate hike as early as July, with the Britons voting on June 23rd.  We also know, however, that six of seventeen officials now anticipate only one hike this year. Before today, the expectation was two quarter-point increases. If only one hike is to occur, the Fed will no longer be under pressure to introduce the first of two, giving it the option to wait for the jobs report to make a rebound. This looks good for the gold market. Gold prices are typically negatively correlated with interest rates, with today's quote jumping from 1287.50 to 1299.80 in the fifteen minutes after officials reported the rate unchanged. Gold should continue upward, nearing highs of 2014 and possibly 2013 leaving $1400 in the cards.

Now with the meeting behind us all eyes are on the June 23rd Brexit vote and I believe it leaves the bulls in a commanding position. No one knows how the vote will play out but physical demand and supply dynamics with mining efforts beginning to stall.

There are many factors that could affect the direction of the gold market this year. For a longer outlook on gold, please click on the link to register for our 2016 Metals Outlook. Below is an excerpt from the guide:

Following a three-year slide in precious metals prices, a historic, three-year rally in the U.S. dollar and one of the most deflationary environments in modern history, it is possible that sentiment towards the precious metals bottomed-out into the December 2015 lows just below $1050/ounce. Seeing the gold market rally over $50 per ounce mid-way through January 2016 in face of the late 2015 deflationary spiral and the exploding U.S. dollar would seem to suggest a change in mentality is taking place.