I have written extensively about the relationship between the Dow and silver prices. One of the points I have emphasized, is the fact that Dow peaks are often followed by silver rallies.

Given the above, its natural that the Dow/Silver ratio is also an important indicator for future silver prices. One example of this, I deal with in my silver fractal analysis report: 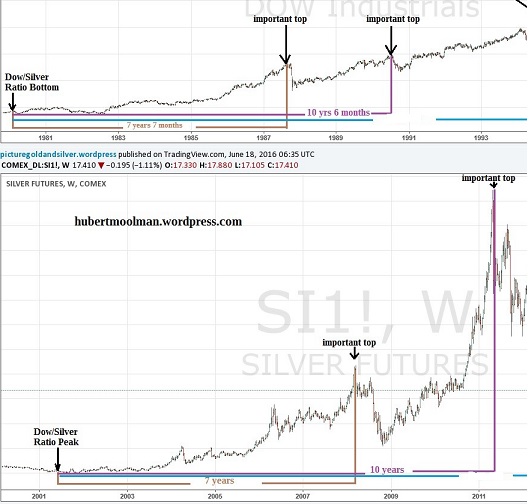 This clearly shows that there is a measurable relationship between silver prices and the Dow, and that one can use the Dow/Silver ratio to help predict future silver prices. For example, this ratio will be very instrumental when formulating an exit strategy for silver.

Below, is a long-term chart of the Dow/Silver ratio (from tradingview.com):

On the chart, I have indicated some key financial events. I have also marked two fractals (A to D). Both fractals or patterns, exist in a similar manner relative to the key events indicated.

Point B (of both patterns) is the bottom of the Dow/Silver ratio, just after a significant silver peak.

Point C (of both patterns) is the top of the Dow/Silver ratio, right at a significant silver bottom. On the 1970s pattern, point C was the low before we eventually had the rally that took silver to the then all-time high of $50.

For more of this kind of fractal analysis, consider learning more about my premium service.