Deutsche Bank to initiate the next “financial crisis”!

I am certain that you remember Lehman Brothers and the “chaos” that it created when it ‘failed’. If you think that the Worlds’ Central Banks are now wiser and consequently will not allow another similar event to occur, think again. We will not only see a repeat of this occurrence, again, but it will be exponentially larger than Lehman’s was!

On June 29th, 2016 the IMF stated that “among the [globally systemically important banks], Deutsche Bank appears to be the most important net contributor to systemic risks, followed by HSBCand Credit Suisse,” reports The Wall Street Journal.

However, if you were to believe that statement, why should you be concerned about a German bank and how it will affect you while living in the U.S.? The IMF adds: "In particular, Germany, France, the U.K. and the U.S. have the highest degree of outward spillovers as measured by the average percentage of capital loss of other banking systems due to banking sector shock in the source country," reports Bloomberg. The chart below clearly shows the systemic risks emanating out of a Deutsche Bank (DBK) collapse. 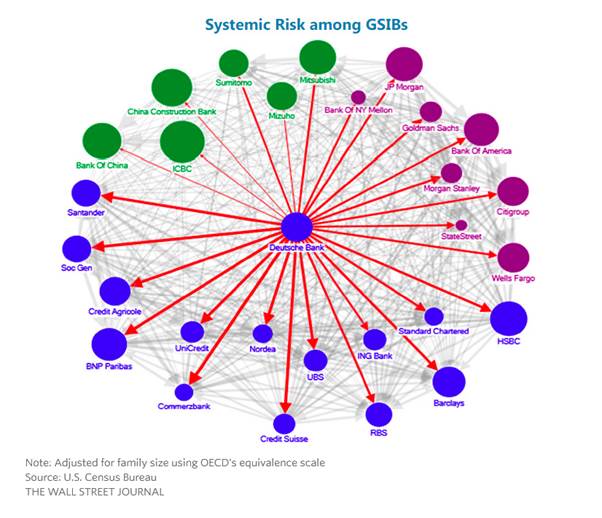 Two years in succession, the American unit of Deutsche Bank has failed the FED’s “stress test” which is what determines the ability of the bank to weather out yet another ‘financial crisis’.

Leverage of Lehman vs. Deutsche Bank:

In 2007, Lehman had a leverage (the ratio of total assets to shareholder’s equity) of 31:1.  At the time that Lehman filed for bankruptcy, it had $639 billion in assets and $619 billion in debt. Still, it caused a ‘systemic risk’ worldwide.

In comparison, DBK has a mind boggling leverage of 40x, according to Berenberg analyst, James Chappell. He stated, "facing an illiquid credit market limiting Deutsche Bank’s (DBK) ability to deliver and with core profitability impaired, it is hard to see how DBK can escape this vicious circle without raising more capital. The CEO has eschewed this route for now, in the hope that self-help can break this loop, but with risk being re-priced again it is hard to see DBK succeeding."

Why Can’t the ECB save DBK in the similar fashion as how the FED saved the banks, in the US?

The nominal value of derivatives risk that DBK holds on its’ books is $72.8 trillion, according to the banks’ April 2016 earnings report. What is astounding about this, is that a single bank owns 13% of the total outstanding global derivatives, which was a staggering $550 trillion in 2015.

What is more concerning and alarming is that the market cap of DBK is less than $20 billion.

Nonetheless, the nominal value of derivatives exposure does not mean that DBK will have a default worth trillions of dollars seeing as most of the contracts are covered by counterparties. However, when the domino effect is put into motion, we have witnessed how it engulfs the entire world, into it.

If the domino effect does occur, Germany with its GDP of $4 trillion or the EU with a GDP of $18 trillion will not be in a position to gain control over it.

A nominal figure of the high derivatives risk on DBK, as of December 2014, is shown in the chart below.

Negative interest regime is NOT the solution to global economic problems which we are facing today:

The European Central Banks’ NIRP policy is making matters worse for DBK, as the banks’ profits are getting squeezed thus making it difficult for it to repair its’ balance sheet.

The bank is finding it difficult to sell its’ assets because of illiquid credit markets. The banks’ management will also find it difficult to raise capital as the investment-banking industry is in a “structural decline”, according to Berenbergs’ James Chappell.

BREXIT is adding to the woes:

DBK receives 19% of its’ revenues from the UK. After the “BREXIT” vote, the uncertainty regarding future relations of the U.K. with Europe has increased the risk for all of the banks. President Francois Hollande of France is eyeing the financial industry and is pitching for them to move to Paris from London.

DBK is the biggest European bank in London. Moving operations, which are handled by 8,000 members of the staff, will not be an easy task for DBK and will further weaken their balance sheet.

How is the stock behaving?

The stock is in a downtrend and has broken below the panic lows of 2009. 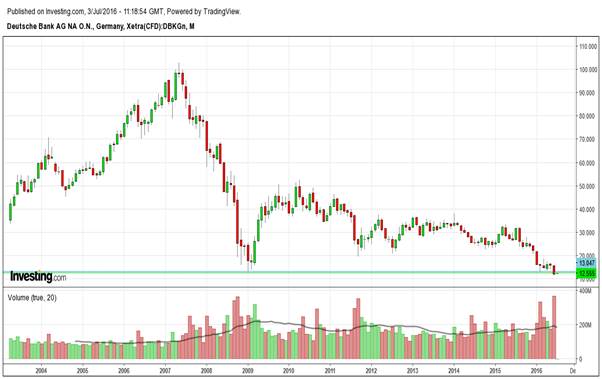 The stock is quoting at a price to book ratio of 0.251, which indicates the pessimism of the markets towards the stock. The investors believe that the stock is not worth more than a quarter of its’ liquidation value.

A comparative study of the stock, with Lehman, gives a more accurate picture of the future price of DBK, which is zero. 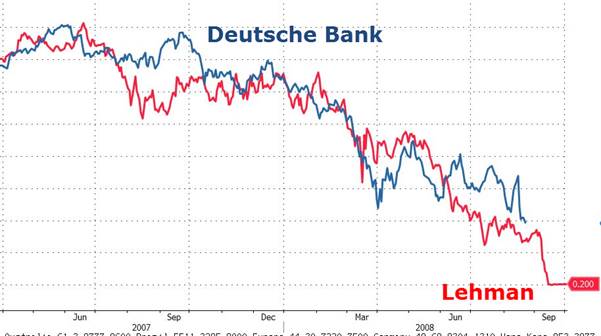 The German Newspaper ‘Die Welt’ reported that the great George Soros had recently opened a short position of 0.51% of the DBK’s outstanding shares. This equates to 7 million shares, worth $7.5 billion, reports Investopedia.

The easy monetary policy of various Central Banks is the main reason for the banks holding such massive leverage. The “next financial crisis” will cause the Central Banks’ actions to be redundant and ineffective, as they will not be in a position to control this impending catastrophe! In such a situation, the world will revert to the only remaining resort left, and that is gold.