Today I like to share my thoughts about the S&P 500 index, the volatility index, and what I believe will be the trigger/event which sends stock markets around the world to new multi-year lows.

While the charts shown here are very simple there is a lot of information behind the scenes that backup the analysis/predictions on the charts below.

Cycle analysis is telling us that the seven-year cycle, which is one of the most powerful cycles that reoccurs in the stock market is now topping. What does this mean? It means we should expect a 1 to 3-year stock market correction.

The market breadth has been slowly deteriorating over the past year. Fewer stocks are making new highs, and many leading sectors are already in bear markets.

So it is just a matter of time before the US large-cap stocks roll over, breakdown, and start a new bear market.

As of Friday, July 9 we’ve seen the stock market momentum show signs of a short squeeze, and also that the majority of market participants are in a panic running to buy stocks. In fact, the NYSE volume ratio shows that there are 18 shares being purchased to every 1 being sold on Friday. I consider a ratio over three to be an extreme level, meaning 18 is signaling a potential significant turning point in stocks in the coming week.

If you take a look at the chart below you can see where I feel the stock market is currently trading in terms of its 2007 to 2008 market top. The volatility index is also showing similar patterns to what we saw before the 2008 bear market.

Based on the current price action of the S&P 500 index and the volatility index it appears that a sharp decline in shares is likely to unfold in the coming weeks. 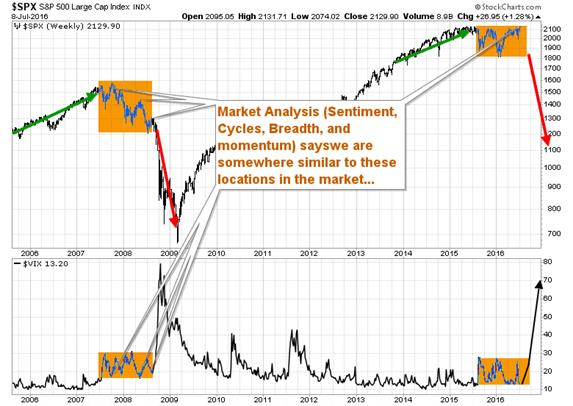 Take a look at the chart below. The red line is the price of US bonds. The black candlestick chart is the S&P 500 index which is the US large-cap stocks. As you can see the price of bonds start to rally way before the US stock market rolls over and sells off. Why does this happen? I believe that the smart money is rotating their money slowly out of equities and into bonds in anticipation of the bear market collapse. Bonds act as a safe haven during times of weakness in both the economy and stock market.

US equities still have a long way to fall before they are technically in a confirmed bear market. The recent rally in bonds is just the beginning for what is to happen. 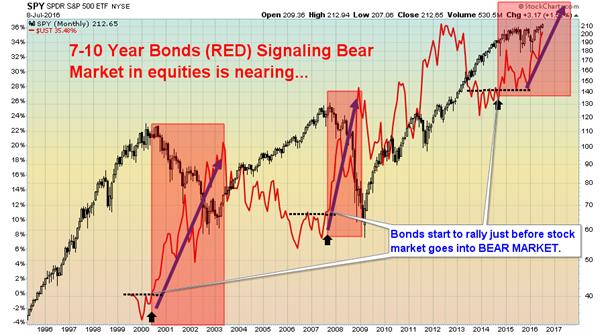 The Trigger/Event/Tipping Point for A Global Equities Crash

In a recent article called “Deutsche Bank to initiate the next financial crisis”, I wrote about how Deutsche Bank is going down the exact same road as Lehman Brothers. In short, both stocks are declining in a similar fashion in terms of share price.

But here is the kicker... If you thought Lehman Brothers was bad you haven’t seen anything yet. The big differences this time around with the banking crisis is that this is 40 times larger than Lehman Brothers and will directly affect almost all key countries and banks around the world. And this time, countries are in far worse shape financially than they were in 2008 during the Lehman Brothers bankruptcy. 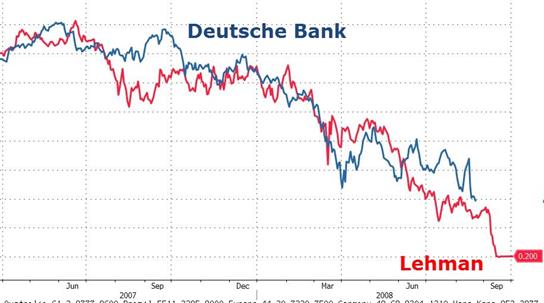 In short, the US stock market is trying to hold up and convince investors everything is fine. While stocks are testing all-time highs I know as a technical analyst that the market is much weaker than it appears.

A lot of things are coming together to form a major market top but like all previous stock market tops, they require a lot of time to mature before they breakdown and new nominal highs are normal to see.