(Kitco News) - Can you learn to be a good trader, or are successful traders simply born that way? That question was the essence of a legendary bet between Richard Dennis and William Eckhardt in the early 1980's.

In the 1970's, Richard Dennis, a commodities speculator known as the "Prince of the Pit" reportedly borrowed $1,600 and turned that into $200 million in about ten years. Dennis believed that successful trading could be taught and made a bet with friend and fellow trader William Eckhardt to settle the debate. 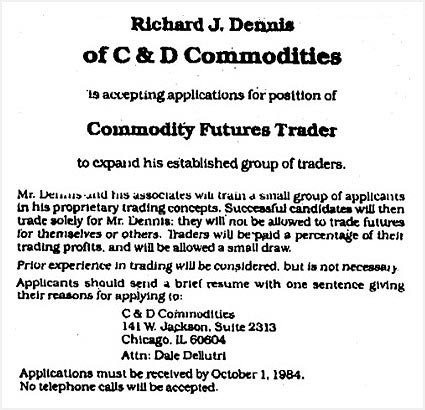 The story of the Turtle traders is well known. Dennis placed newspaper ads, recruited traders, trained them for two weeks and then gave them fully funded accounts to trade. When the "experiment" ended five years later his Turtle disciples had reportedly made over $175 million in profits.

The lessons appeared clear:  You can learn how to trade.

It begs the question, would Turtles buy gold now?

The system: the Turtles had a few variations and filters. But, at heart, the approach was a simple rules-based trend following system. While the old Wall Street Adage of "buy low, sell high" rings in investor's ears, the Turtle approach was to buy high on a breakout.

A simplistic version of one of their systems was to simply buy a market on a breakout to a new four-week high. Exit and take profits on a new two-week low.

What does this mean for gold now? In the short-term, the upside breakout is faltering and the trending nature of the gold move has stalled. The Turtles –a strict trend following group, would already be out looking for their next trade.

This doesn't doom the gold picture right now. It simply means the upside momentum has stalled. For long-term investors, it is just more "noise." Gold is vulnerable to some backing and filling, some consolidation. Strong support lies at the $1,308 range, marked at Point C.

Key takeaway: The trend off the December 2015 low remains positive.  Trend traders might want to take a break and head for the beach. Long-term traders can take heart that the 2016 uptrend remains intact.

No matter what system or approach you trade, it is important to follow your rules. Be consistent. Know your entry points, your trading targets and your stop-loss levels. Risk management is critical to staying alive in the trading game. You don't have to trade like a Turtle to succeed, but you do have to develop a rules-based trading or long-term investing approach. Develop rules that make sense to you and stick with them. 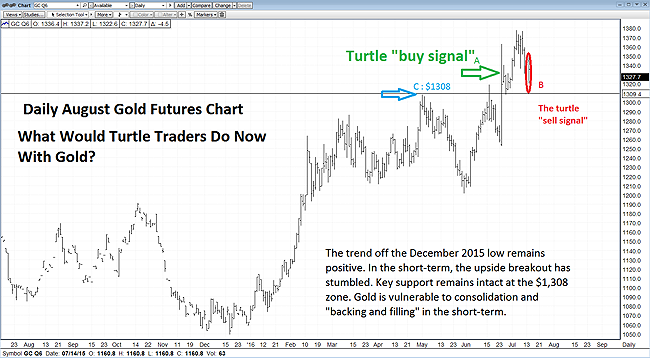