Gold, silver and miners have been moving strongly this year.  What is not to like for a precious metal investor – negative interest rates, volatility in fiat currencies, slowing global growth, Brexit, conjecture that central banks are running out of ammunition, racial tensions, terrorism, conjecture that inequality may lead to riots, coup in important NATO ally Turkey, massive inflow of refugees, and other geopolitical issues.

The media is full of news and articles hammering the message that finally everything is good-to-go for the precious metals. A dissenting view is very hard to find.

It is precisely at a time like this that serious precious metal investors need to ask themselves hard questions.  It is always easy to go with the flow.  My over 30 years in the markets and life time’s work has taught me that going with the flow often causes big losses and most money is made by asking questions that no one is asking.

The All Important Chart And Undeniable Facts

In asking hard questions, an important issue that every serious gold and silver investor faces is that media is full of opinions by gurus that are neither grounded in hard data nor are unbiased. 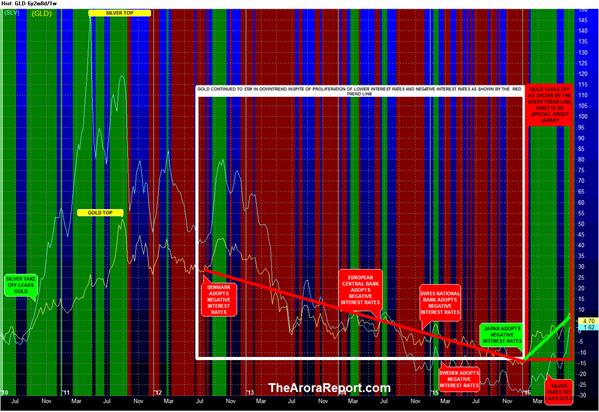 Please click here for a large chart as there is a lot of detail on the chart of interest to precious metal investors.

Here are the undeniable facts from the chart.

First, what is so special about Japan?

Second, why did silver take-off lag gold this time when historically silver tends to lead?

Third, what does silver lag portend for the future?

More On The Chart

The background colors on the chart are automatically generated by a combination of some of our algorithms; green is bullish, maroon is bearish, and blue is neutral. The chart analyzed here is only in one time frame.  Similar signals are automatically generated on yearly, quarterly, monthly, weekly, daily, hourly, and 15 minute charts.  Combination of these signals is then input into another algorithms that has many additional inputs such as relationship between currencies, interest rates, sentiment, money supply, global geopolitical picture, global GDP growth, inflation in key countries, leading indicators of inflation, risk appetite, etc.

Some of the inputs are adaptive, i.e., their weight changes based on conditions and co-relations. The adaptive nature of the algorithm has been the most important reason behind consistently accurate calls on gold and silver by The Arora Report over the years.  Experience has shown that algorithms that are static stop working after a while because market conditions change.   For this reason, investors and traders should avoid algorithms that are fixed.

Current Ratings On Gold And Silver.

Of course, our timing models on gold and silver are much more sophisticated and take into account many more factors.  Here are our current ratings.