The Most Important Market in the World. Are We at a Tipping Point? 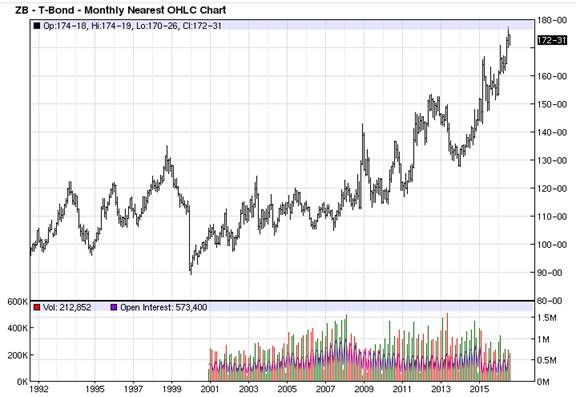 Above is a 25-year chart of the U.S. T-Bond market. Of course the bull market extends at least 10 years further back than what is shown above. When Volcker exercised just a small amount of discipline by taking his foot off the gas pedal during the stagflationary 1970s, T-Bond rates rose to over 14%! My first mortgage was 17.5%. 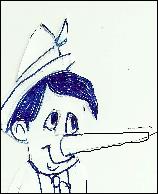 The point I am leading up to is that the bull market pictured in the chart above is as phony as Pinocchio, and if Michael Oliver is right, it will be as difficult to retain its safe haven status as it would be to believe Pinocchio were telling the truth and didn’t need a nose job!

Blow-off Status! That’s how Michael characterizes the U.S. T-Bond Market. As stated in his August 10, 2016, missive, Michael noted that we are on the verge of an end to the greatest bull market in U.S. Treasury market history, which will be accompanied as well by the long-dated treasuries of Germany and Japan, the two other countries with sizeable debt markets that back two other reserve currencies—namely, the euro and the yen. As Michael stated, “The T-Bond’s long-term momentum trend is in a blow off condition (the terminal upside vertical phase of an aged bull). Defining when that verticality ends and the opposite begins we’re determining via long-term (annual) and intermediate momentum metrics. A violation of the intermediate momentum uptrend will likely be the first warning of the downturn.”

Why is this such a big deal? It’s a big deal because when you have a blow off in any market, it is followed by a violent reaction in the opposite direction. In other words, when the long-dated T-Bond finally hits its peak—and Michael’s work suggests we are very, very close to that point in time—the Fed will be no more able to hide its continuous interest rate lies than Pinocchio was able to keep his game of deceit going. His nose gave him away. An interest rate that cannot be suppressed will give the Fed’s lies away.

I was a young man when Volcker’s monetary policy saved the dollar and set the table for massive savings that fueled a great bull market in stocks as well as bonds. I remember that time vividly and the fear that struck the hearts of Americans when Jimmy Carter’s inflation rate rose double digits. Before Volcker did what needed to be done during Jimmy Carter’s presidency, the Burns Fed under Nixon poured gasoline on the inflationary fires. But from the benefits of a gold standard that lasted until 1971, the U.S. was still a net exporter during Nixon, and when Volcker allowed rates to rise following the Arthur Burns inflation, high interest rates resulted in a huge amount of savings by Americans and a huge amount of capital flowed into the U.S.  With that pain the tables were set for the huge gains not only in the T-Bond market but also for the equity markets. Unfortunately, over the years the Fed became increasingly Keynesian in economic thought, and the Military Industrial Complex that Eisenhower warned us against began to demand more and more easy money.

The trouble is, under this fiat system, money is seemingly created out of thin air, but that isn’t exactly true, because for every dollar created there is a dollar of debt. But income is not growing nearly as fast as debt so the system is now at the breaking point. Treasuries are considered a safe haven because governments can always print them. But that assumes that governments will always be solvent. We know from history there is a time limit to the solvency of governments.

So here is what I’m thinking the most likely scenario is. If Oliver is as correct with the T-Bond market as he has been with every other market I have seen him opine on, we will likely see interest rates rise dramatically before year end. If the policymakers can keep a lid on them to get Hillary elected they will do so. But at some point, rates will rise and very early in that process I believe we will see a major economic implosion that could make the 2008-09 version look like a Sunday walk in the park.

With an inability of the Fed to curtail the raise in rates, much as happened in the 1970s but on a scale that far surpasses that of the 1970s, money will be printed and transferred to the public. In fact, policymakers are already planning for this eventuality when they talk about “helicopter money.” Even as inflation rises, more and more money will be printed because the policymakers will not have any other politically palatable way to go. That is when I think we may enter into a hyperinflationary world—the likes of which could very well lead to major geopolitical changes and potentially a hellish situation for Americans.

I pray that God will spare us from this eventuality. But in looking at the political situation and an inability to face truth by our policymakers so that the right policies are entered into, I cannot see any rational way out of a complete breakdown of the global economy and unfortunately the possibility of a World War. In fact even now, it seems the American Empire is planning one with Russia and China, as our neocons are telling China they can’t patrol their own sea lanes and control their own trade. Same with Russia, and even now NATO is stationing troops on the border of Russia after the U.S. clandestinely overthrew the elected Ukraine government, just as we have been doing ever since WWII. 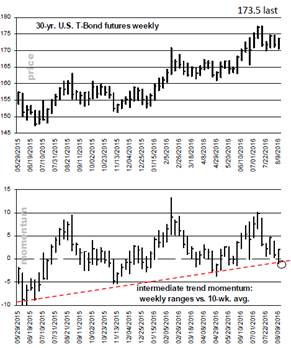 How close are we to a breakdown in the Treasuries and thus entering into a global monetary system? 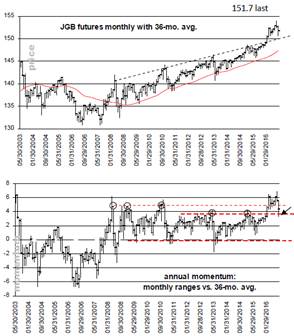 As noted above, Michael believes all three major western world long-dated sovereign debt instruments will spin downward, sending rates skyrocketing more or less at the same time. From his work it seems as though the JGB has already started that process. The annual price and momentum charts for the JGB are displayed above left. On the price chart you can see the JGB accelerated above the uptrend resistance line in 2015. It has fallen back but has not yet violated the uptrend price line. But remember, Michael’s momentum work usually provides a timely call before you see a new trend in the price. And here you see it has violated the higher horizontal line, indicating momentum weakness when it fell below 152. The JGB closed this week at 151.7. Michael is placing much more emphasis, however, on the horizontal line slightly below the upper line. If the JGB falls to 151 or lower by the end of this month or below 151.2 by the end of September, he is suggesting that will be a major long-term negative event. With that lower line violated, the JGB is likely to fall to the zero line, which would mean really dramatically higher interest rates.

If the lower line is taken out this month or next, Michael sees that as a very major long-term negative event. He is monitoring it very closely due to the wide and dark implications it has, not only for the debt markets but for the equity markets as well.

Above right is an intermediate-term price and momentum chart for the U.S. T-Bond. A key to watch to determine if the verticality is concluding and thus preparing us for a major rise in interest rates whether the Fed likes it or not, is very close. The T-Bond price to watch now is a weekly close at 170.50 or lower. On Monday of last week the T-Bond fell to 170.65. Again what is needed is a weekly close below 170.50. As Michael noted in his August 10 missive, “The key intermediate trend, must-hold trend structure for the T-Bond futures was again validated by momentum by the bounce this week.”

Michael is also watching the German Bund, which he did not talk specifically about this week. But as noted, when one of these three finally hits the dust, they will all go, meaning a dramatic rise in interest rates in the strongest currencies in the western world. Perhaps you are thinking that blow off needs to be very rapid and that a few weeks is anything but rapid. But “rapid” is all relative. The bull market in the U.S. T-Bond has been running since 1982. A span of several weeks or even a month or two may well be considered “rapid blow off,” given the enormous time this security has been in a bull market.