Gold And Presidential Politics: Why Your Vote May Not Count

(Kitco News) - Sept 9 –Brace yourself. The winds are changing. Come 2017, there will be a new occupant in the Oval Office in Washington, D.C.  However, it may be disturbing to know that your vote may not really matter, depending on what state you live in.

It's not the popular vote in the United States that
determines who wins the election, it's the Electoral College.

When Americans go to the polls and vote for President and Vice President, they are actually voting for the Electoral College. It is these electors –who actually choose the nation's president.

This is an elaborate system created by the Founding Fathers in which the Constitution delegates each state a number of electoral votes equal to the combined total of the state’s Senate and House of Representatives delegations. There is a group of electors voted in for each political party in every state. In the winner-take-all system, whoever wins the popular vote of that state will win all the Electoral Votes from that state.

The current count: RealClearPolitics.com has a running total in real time and is a good source for this information. 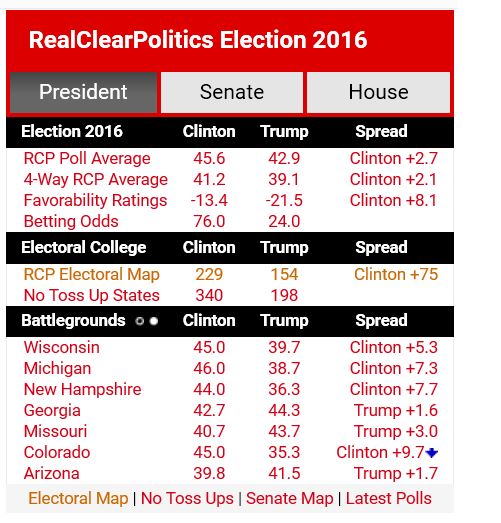 Why was this system developed: Some say, this system was designed because the founding fathers, who were an educated bunch, didn't trust the rank and file and perhaps less educated citizenship to actually choose the leaders of the country.

Question: How many times was a US president elected to the White House who did not win the popular vote? Yes, it's happened.

Hint: To track pre-election trends, follow polls in the key battleground swing states. These include: 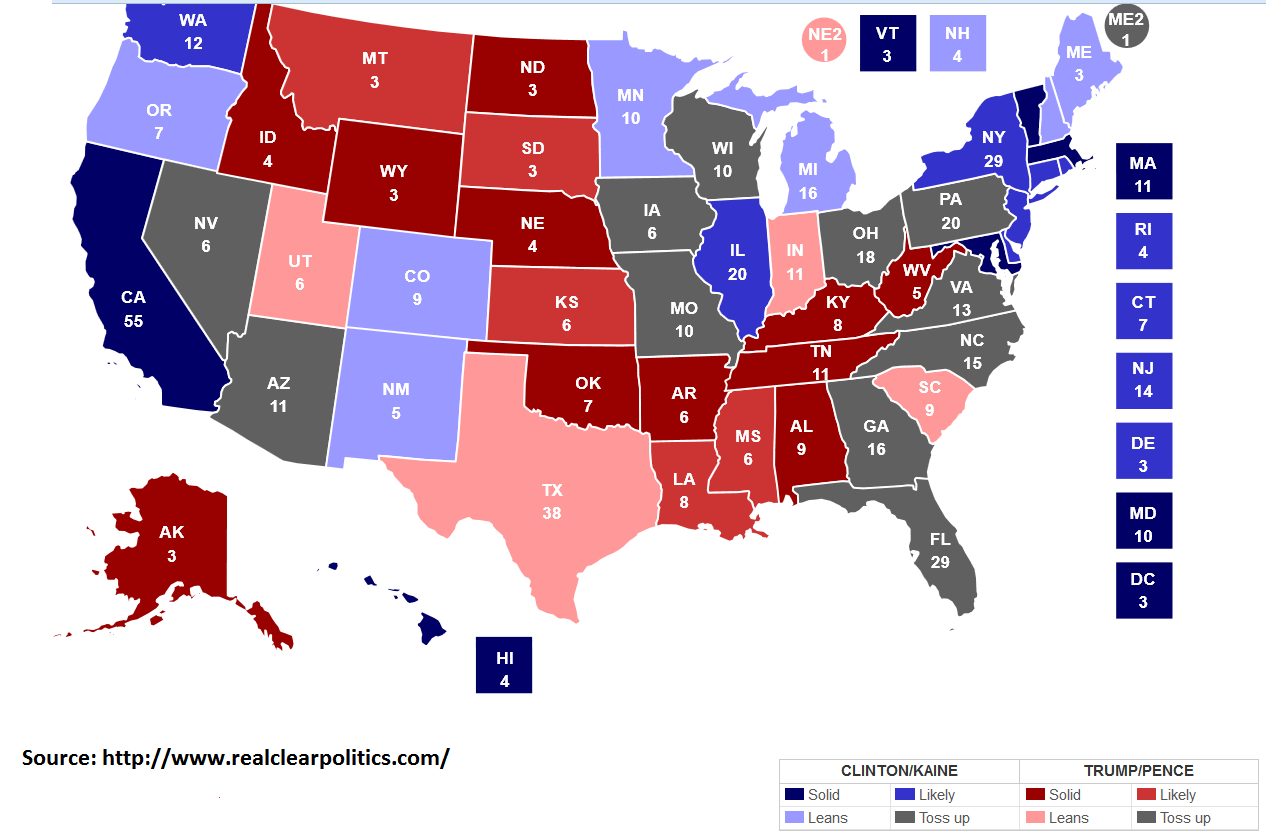 "Clinton  represents  the  status  quo  and  Trump  represents  serious  change  amid  increased
uncertainty. Trump’s easier fiscal policy and decreased regulation could drive growth and
inflation  higher  in  the near  term,  perhaps  requiring  tighter  monetary  policy. However, increased uncertainty under Trump could weigh on growth," according to a research report from Credit Suisse.

Trump: has potential to get his proposals passed in a likely Republican controlled Congress.
Key points:

Economic result: "Projections of the future debt will balloon as a result of the tax changes, but lower taxes would likely boost growth forecasts in the short term," Credit Suisse says.

Clinton: is expected to be largely status quo, as her policies are similar to President Obamas. Growth, policy and earnings expectations are unliklely to change significantly, Credit Suisse says.
Key points:

No matter who wins the White House in November, gold could come out a winner.

Your popular vote still may not matter. There has been some rumblings for a National Popular Vote bill, but it hasn't gained a lot of steam. Maybe it is time for this proposal to gain some attention. It would equalize political clout among all states, and all Americans.