When is a non-rate hike a rate hike? Today, the Federal Reserve decided not to raise rates in the “obscure” November meeting but left December on the table. We have to say, however, that the key part of the news release following the close of today’s meeting scarcely felt robust.

Gold moved upward, drawing strength from a weaker dollar and bullish sentiment in regular trading activity. However, gold did come off its highs of the day.

The FOMC said in its statement: "The committee judges that the case for an increase in the federal funds rate has continued to strengthen but decided, for the time being, to wait for some further evidence of continued progress toward its objectives," 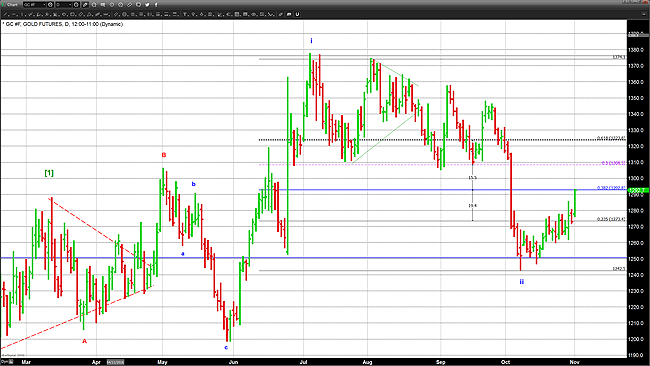 CNBC pointed out that similar language also appeared in the September statement, though that statement said the case "has strengthened" rather than this month's "continued to strengthen" phrasing. The word "some" also was missing in September.

"They punted because of the growing uncertainty around the U.S. election," said Michael Arone, chief investment strategist at State Street Global Advisors. "The Fed wanted to take a bit of a backseat, and this fairly benign change in their statement reflects their conservative nature.".

Of interest is the fact that Boston Fed President Eric Rosengren joined the eight-member majority that favored holding the line. This comes after he had been in the dissenter column at the September meeting. .

Equities were down across the globe today. We are hesitant to ascribe all of the down-trend to interest rate jitters. We think a lot of the decline in stocks worldwide can be attributed to continuing serious weakness in crude oil.

West Texas Intermediate settled down almost 3.00%, while Brent North Sea fell about 2.85%. Intriguingly, the Dow Jones Industrial Average is down least of all among U.S. indexes. .

We are compelled to mention the volatility that has seeped into the markets due to the approaching U.S. election this Tuesday. We have studied a great number of polls/surveys and have found that Donald Trump’s perceived surge recently pre-dated the revival of news about Hillary Clinton’s new email travails. .

Ironically, in most recent surveys, which came after the new email news, Hillary Clinton seems to be holding on to her lead, if not gaining strength.

In keeping with the recent perceptions, the VIX volatility index rose again today, but only by 2.4%.

Jan 18 There is No Such Thing as a Free Lunch for Central Banks
Jan 16 Gold holds steady above $1,550 even with the headwinds of recent events
Jan 15 Record breaking day as 'Phase One' trade agreement is signed
Jan 14 'Phase-One' trade agreement should increase economic growth globally
Jan 13 Safe-haven assets see diminishing value as U.S. equities soar