When you awake, you will remember everything…
– J.R. “Robbie” Robertson (The Band)

There is a positive way to interpret the recovery in today’s markets following very, very wild overnight sessions.

At one point the Dow Jones Industrial Average was down 800 points, well over 5.00%. Gold had soared to $50 per ounce. Oil had tumbled into the mid-$43 range. 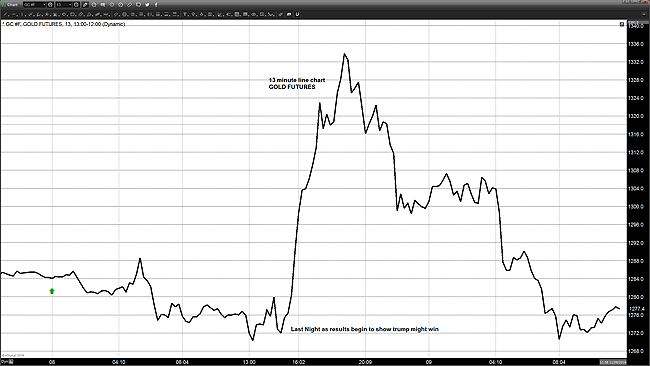 West Texas Intermediate is in the $45.25 per barrel range.

What does this say about the U.S. elections? Not to be glib, but not much. What it does say is that investors and traders believe in the system, the soul of the machine, and that it commands respect and money.

Asia closed too early to get out of its negative funk. The Nikkei was off about 5.00% while Hong Kong was down 2.00%. Shanghai was marginally off. Europe enjoyed the fruits of the resolution of the American election. All three indexes there were solidly up, 1.00 to 1.50%.

The U.S. dollar was up almost 0.85% against the euro, which accounts for all of the red in gold’s move today. Regular trading just couldn’t overcome dollar strength. The dollar was also up against the yen and Swiss franc, showing there was a waning call for haven currencies. The British pound, however, strengthened against the greenback.

Just to emphasize that even during historical moments, markets also hew to true fundamental forces, let’s take a look at oil a little more closely.

Aside from the effects of the Trump win, oil prices tumbled after weekly government data showed yet another build in U.S. crude inventories. Eventually the market looked past both factors.

"The report is fairly neutral, and the market is accordingly having a muted response," said Matt Smith, director of commodity research at energy data provider Clipper Data.

On the status of OPEC production freezes or cuts – Iran, Iraq, Libya, and Nigeria have requested exemptions from production limitations. They collectively added 450,000 barrels per day of output in October, all citing different rationales of equity for their requests, ranging from years of deprivation due to sanctions on Iran to needing cash to fund the fight against ISIS by Iraq to simple impoverishment in Nicaragua.