The Spreading Bondfire And The Rising Price Of Gold

Today’s rising interest rates and trillion-dollar losses in global bond markets are prelude to what is to come, i.e. rising inflation with higher interest rates ending in the bursting of the global government bond bubble and the long awaited breakout of gold. 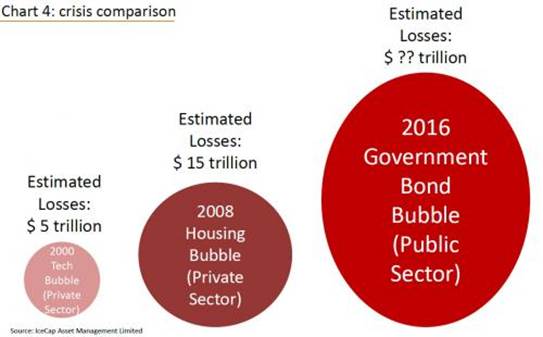 Last year, on December 15, 2015, the Fed announced the first tentative rate increase in nearly ten years, from 0.0% to 0.25%. The Fed had last raised rates in June 2006 which eventually burst the US real estate bubble in 2007 resulting in the collapse of global markets in 2008.

In 2015, after a decade of unprecedented cheap money and virtually free credit to banks, Yellen’s Fed hoped economic conditions had finally stabilized and they could again charge commercial and investment banks interest, a nominal rate of only 0.25%, for their debt-based capital.

…The increase draws to a close an unprecedented period of record-low rates that were part of extraordinary and controversial Fed policies designed to stimulate the U.S. economy in the wake of the most devastating financial crisis since the Great Depression. The FOMC lowered its benchmark rate to near zero in December 2008, three months after the collapse of investment bank Lehman Brothers Holdings Inc. 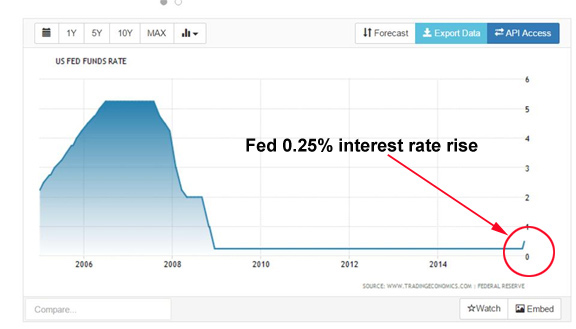 …Virtually all investors lost money during the atrocious month of January sending the Dow to its worst 10-day start to a year on record going back to 1897.
CNN, January 2016

…total stock market losses in the United States alone was $2.2 trillion [In January]..after just 11 trading sessions…Bloomberg [estimates] $15 trillion in net value has mysteriously vanished from the value of equities around the globe.
247wallst.com, January 20, 2016

On January 28th, the Japan’s central bank had to reassure frightened investors that the era of cheap central bank money wasn’t over; and the BOJ then announced even lower interest rates, a negative rate of -0.1%.

The next day: US stocks closed sharply higher [after] the worst January performance since 2009..Friday’s surge came amid a global equity rally following a surprise decision by the Bank of Japan to push a key interest rate into negative territory that some said could push the Federal Reserve to ease up on its plans to steadily raise interest rates…Randy Frederick, managing director at Schwab Center for Financial Research, blamed the stock market’s monthly losses on the Fed’s decision to raise interest rates in December…
MarketWatch, January 29, 2016

In 2016, because of January’s shocking stock market losses, continuing economic “softness” and other factors, e.g. Brexit, prevented the Fed from raising interest rates again as planned; but, today, with only one meeting remaining in 2016, in December, another nominal rate increase is a foregone conclusion unless, of course, another financial crisis intervenes. 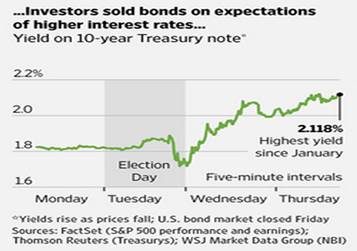 Donald Trump’s stunning victory for the White House may mark the long-awaited end to the more than 30-year bull run in bonds…A two-day thumping wiped out more than $1 trillion across global bond markets worldwide, the worst rout in nearly 1-1/2 years…The stampede from bonds propelled longer-dated US yields to their highest levels since January with the 30-year yield posting its biggest weekly increase since January 2009
Reuters, November 14, 2016

Barclays Global Aggregate Bond Index is down 5% in the 2 weeks ended Thursday [November 17th] – its worst such drop since March 2003..More than $77 billion in assets are benchmarked to the index..it incorporates investment-grade debt denominated in 24 currencies. Sovereign bonds have historically been the index’s most heavily-weighted constituent… 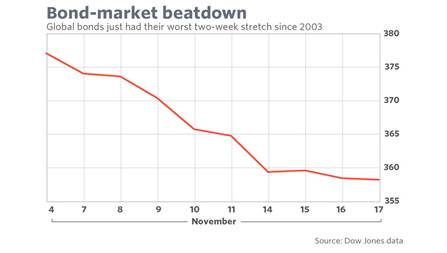 …the selloff accelerated aggressively after Donald Trump won the US presidential election…The selloff was predicated on the notion that Trump’s campaign promises to rebuild America’s infrastructure, cut taxes and raise trade barriers, would – if they became reality – drive up inflation, and possibly force the Federal Reserve to raise interest rates more quickly.

The pricing of federal fund futures contracts implies that there is a greater than 95% chance of [the Fed] raising rates at its next meeting, on 13-14 December
The Guardian, November 17, 2016

Today’s rising interest rates not only predict higher borrowing costs for sovereign bonds but also the long-awaited and final breakout of gold. After gold’s spectacular rise in the summer of 2011 during the EU sovereign bond crisis, central bankers moved to ensure that gold did not threaten their ponzi-scheme of credit and debt; and with a combination of negative gold lease rates and paper gold futures, central banks drove down the price of gold down from its September 2011 high of $1920 to its 2015 low of $1150.

But, in 2016, central bankers are far weaker due to their costly and long-running efforts to rescue their credit and debt ponzi-scheme from deflation’s growing sinkhole of low demand and even lower growth; and today’s rising interest rates threatens the foundation of their fraudulent fiefdom as nothing else does.

The world’s central banks not only now own record amounts of government debt, the value of that debt—if marked-to-market—is significantly lower than nominally priced; and, if interest rates rise, central bank balance sheets could be wiped out resulting in the bankruptcy of central banks themselves

In 2016, rising interest rates caused January’s multi-trillion dollar selloff in global stock markets as well as November’s trillion-dollar rout in bond markets. The prediction of even higher interest rates next year means even more significant losses in financial markets in 2017.

The bankers’ three hundred year-old ponzi-scheme of credit and debt is ending. We are now in capitalism’s third stage, what Hyman Minsky called the ponzi-stage, where borrowers pay what they owe only by borrowing more, e.g. the US Treasury bond market.

There is no fourth stage. The battle between capital and free markets is almost over; and when the bondfire in the bond markets has finally run its course, gold (and silver) will be the victor.