The 14-Year Record of the Baltic Dry Index

Earlier this year I documented seasonal moves in the prices of gold and oil over the past 20 years, copper over 13 years, and the Toronto Venture Exchange Index over 14 years (Mercenary Musings: January 4; March 28; April 11; June 13).

Many lay investors may not be familiar with the Baltic Dry Index; therefore, I offer a brief explanation:

The BDI measures the current price of moving raw materials by sea. It is posted five days a week, exclusive of holidays and from Xmas until the first work day of the New Year.

The Index is compiled and posted by the Baltic Exchange of London and covers four different sizes of bulk cargo ships on 23 shipping routes throughout the world.

The Baltic Exchange has a long history. It was founded in 1744 by a group of merchants and traders in a London coffee house and called the “Virginia and Baltick”, reflecting England’s major sources of international commerce at the time. By 1823, it consisted of a merchant committee that regulated trade and operated a securities exchange from a local tavern. It admitted the London Shipping Exchange as a member in 1900 and organized as a private limited company with shareholders. In 1992, its iconic building was destroyed by an Irish Republican Army bomb. In early November of this year, the Baltic Exchange was acquired by the Singapore Exchange in a friendly transaction.

The Exchange consists of over 600 member firms and is the world’s only source of maritime market information for the trading and settlement of physical and derivative shipping contracts.

The Baltic Dry Index was started in 1985 and surveys a panel of international shippers on a daily basis for assessments of rates. It is a weighted index that considers shipping routes and volumes for the four different categories of cargo ships. BDI covers 100% of bulk dry cargo in transit on the world’s oceans but does not include ships transporting freight via container or transport of energy liquids by tanker.

The largest bulk cargo ships carry over 100,000 dead weight tonnes and are called “Capesize” because they are too large to enter the Panama or Suez Canals; i.e., they must travel around the southern capes of South America and Africa. These ships, which can reach up to 400,000 tonnes capacity in Southeast Asia, handle 62% of the world’s bulk dry cargo, mostly iron ore and coal.

BDI is a direct measure of the supply of dry bulk carriers versus demand for shipping capacity. The supply part of the equation, consisting of about 9000 vessels worldwide, is tight and inflexible. Unlike oil tankers, it is costly to park and idle a cargo ship, and new ships take two years to build. Because of fluctuating world and regional demand, the Index can be wildly volatile on both the upside and downside.

The Index indirectly measures global supply and demand for metallic ores, coal, grains, steel, and industrial and agricultural minerals. Because 95% of the metal mined worldwide is iron ore, the Index is dominated by this commodity. Coal (both coking and thermal) is the second most important material contributing to the Index. Copper and bauxite are other metallic ores of consequence; steel, timber, and cement are important construction materials.

BDI is a “leading economic indicator” in that it measures the transportation cost of raw materials used for production of finished goods. Therefore, it is an important input in predicting short-term economic activity.

There is no speculative component in the Baltic Dry Index because freighters are contracted only if there is cargo to move. That said, there is a freight derivatives market operated by the Baltic Exchange and administered by brokers that allows principals and traders to lock-in or hedge freight rates via futures contracts. These derivatives are collectively called “forward freight agreements”. 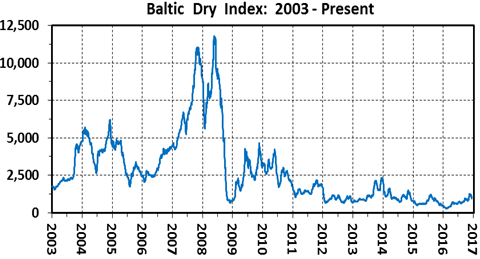 The Baltic Dry Index has exhibited extreme volatility over the past 14 years with rises and falls broadly corresponding to bull and bear markets for industrial commodities.

BDI’s all-time high of 11,793 was reached on May 20, 2008 in the second of two parabolic spikes when commodity prices peaked. By December 5 of that year, it had plunged to a post-1986 low of 663 for a 94% decline as commodities demand crashed amid the global economic crisis.

From early 2012 to Q3 2016, a deep bear market for commodities resulted in the Index trading well-below its previous low. Its all-time bottom of 290 occurred on February 11 of this year due to severely depressed demand for iron ore and coal and a glut of carriers.

Since that time, BDI has moved sharply upward as the commodities sector enters an incipient bull market cycle. It reached 1257 on November 18 but is currently trading in the mid-900 range as cargo shipping reaches its usual year-end lull. The 25% decline over the past month attests to the Index’s volatility.

Economic factors that influence movements of the BDI include:

The following series of four charts shows percent change in the daily value of the Baltic Dry Index normalized to January 1 for each year: 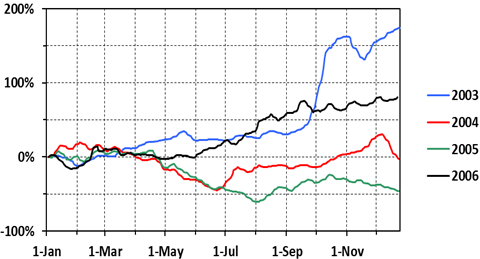 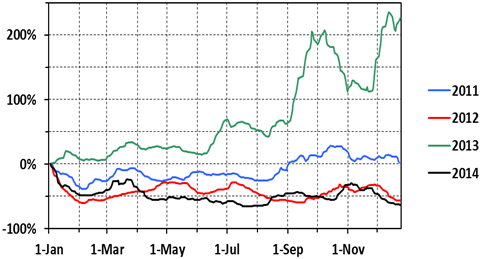 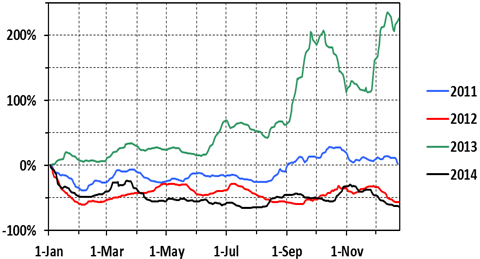 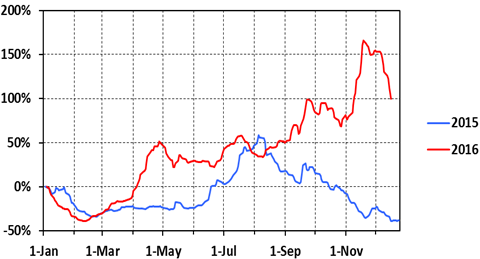 The Baltic Dry Index has an average range from the beginning to end of a given year of 94% over the past 14 years.

We have chosen to disregard the two neutral years (2004; 2011) as a separate data set because of small sample size.

Please note the significant change in y-axis scale for the bull years; its data range is 200% as opposed to 75% for the overall composite and 55% for bear years: 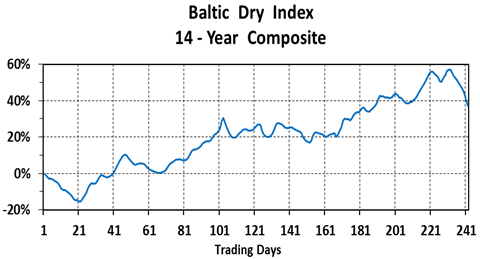 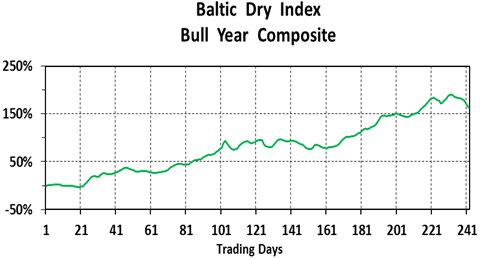 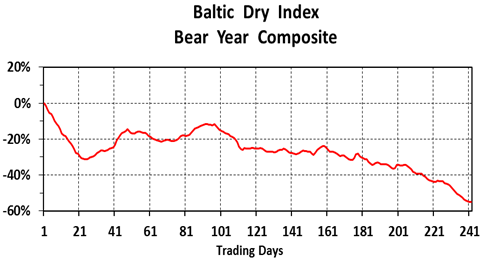 Now let’s explore some factors that can account for the well-defined seasonal trends in the Baltic Dry Index:

Our research indicates there is a pronounced seasonality in the Baltic Dry Index over the14 years of available daily history. This documented seasonality reflects current supply and demand conditions for the world’s most important metallic, industrial, and agricultural commodities transported in bulk by cargo ships.

The Index is a leading economic indicator because it is a predictor of the total cost of raw materials delivered to customers who produce manufactured goods and pass costs on to wholesale buyers and then to retail consumers.

The Baltic Dry Index is an important input that I use to forecast short-term commodity price movements and macroeconomic trends.