(Kitco News) - Jan. 20 – A new era begins in Washington D.C. today as President Donald Trump is sworn into office. The first 100 days will be closely watched and may well set the tone for financial markets in the months to come. The stock market has already priced in a great deal of expectations and now investors are waiting to see if the new Republican administration can deliver.

While the historians will take years to ultimately assess the outgoing President's contributions to America, the actions on Wall Street are evident now.


A Look Ahead
A post-election market surge propelled the S&P 500 to new all-time highs as investors priced in the pro-growth stimulus expectations.

Traynor defines the TIDE as:

“Trade is an area where the Trump ’bluster’ has had the highest profile and where we believe some of the discussed renegotiations, restrictions and reneging will have a negative impact on the economy. While we certainly believe in fair and open trade accords, it is critical to remember the post WW II increase in global trade has led to increased global growth and individual productivity. Make no mistake about it, the U.S. economy will be negatively impacted by trade restrictions," Traynor says.

Interest Rates: “The eclipsing of the era of ’free money’ as reflected in the incredibly low interest rates seen over the last eight years will impact industries benefitting the most from low rates, such as home building. Sustained low rates allowed borrowers to refinance and capture billions in additional cash flow that was in turn moved back in to the real economy," Traynor says.

Energy prices: “Whether the production cutbacks planned by OPEC and non-OPEC countries will hold is less than certain, but they are undoubtedly a step in the direction of higher prices. Every penny increase in the price of a gallon of gasoline has the effect of acting like a tax increase of one billion dollars over an entire year for US consumers. Higher prices will also lead to increased drilling in the oil patch which may offset some of the drag higher prices will have on consumers," Traynor says.

Rain is forecast in the nation's Capital today. Analysts at LPL Research took a break from the seriousness to ask if the weather in Washington D.C. on inauguration day has a relationship to S&P 500 returns.

"To be sure, the weather on any given day is of no consequence to long-term returns for markets, but patterns do emerge at times, even if the correlations are just coincidence. Going back to the 1949 (the second inauguration of Harry Truman, and also the earliest inauguration day where weather data were available), the presence of precipitation appears to be the most impactful data point. As the chart below shows, rain (or snow) on inauguration day has historically been a bad omen for the stock market," according to an LPL research note. 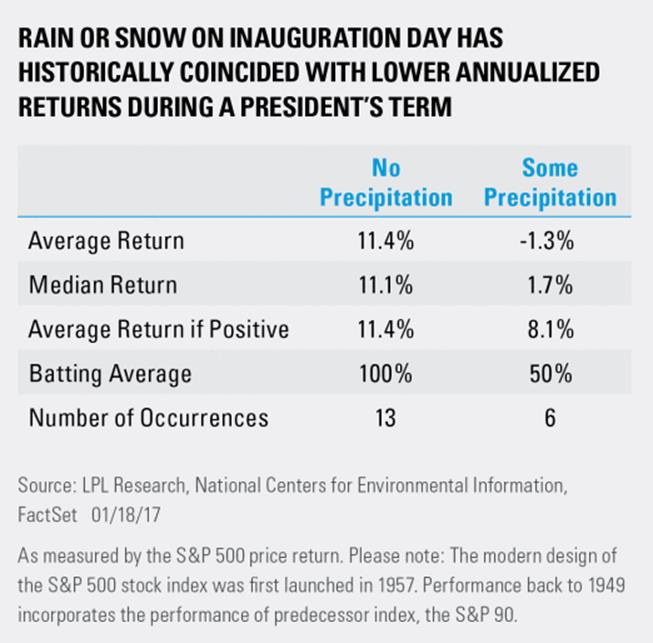 Gazing into the crystal ball for 2017 and beyond the gold market will see competing forces and influences. Here are just a few.

What are your predictions? Let us know at mailto:mediafeedback@kitco.com