Was The January High In the U.S. Dollar A "Trump Top?"

(Kitco News) - Feb. 3  - A bullish brew of fundamentals are simmering in the pot for gold and other precious metals prices this year. Industrial metals have stormed out of the starting gates and are already racing around the track – leading the charge for metals bulls this year, and gold and silver aren't far behind.


The first and foremost support for the precious metals complex may well come from the new Trump administration that has spearheaded a reversal of a decades long strong dollar policy. Let's take a look at what that means. 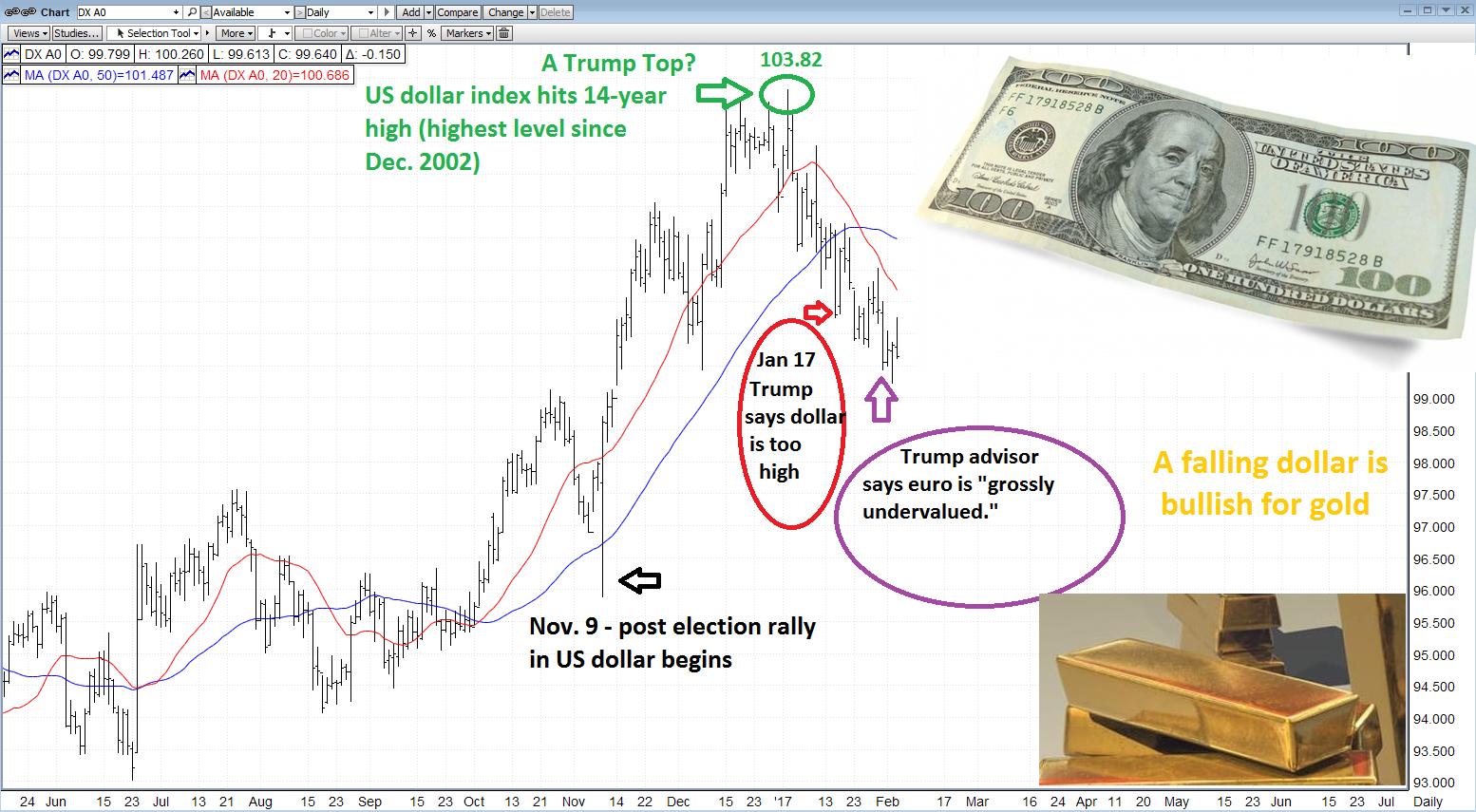 President Trump is talking down the U.S. dollar and so far it's working. For decades U.S. government officials have attempted to "jawbone" the dollar higher in a strong dollar policy. The level of a country's currency, of course, is in some ways an economic symbol of that country's financial stability and strength. The world of currencies is a zero-sum game – where for every winner there is a loser. That means as one currency gains, another currency must fall.

Gold, of course, is priced in U.S. dollars. A rising dollar trend tends to weigh on the price of gold. While a falling dollar trend is a positive factor for the gold market.

Looking back: The dollar rallied significantly in the weeks following the presidential election as traders priced in expectations for stronger economic growth, higher inflation and higher interest rates. That was fueled by a variety of campaign proposals which included rolling back regulations, a $1 trillion fiscal spending package and tax cuts. The strong gains may have been a case of the cart getting ahead of the horse and a little backing and filling was to be expected.

The dollar index has topped out at a 14-year high and reversed course since the start of 2017. Could this be a "Trump Top?"

The impact on U.S. companies: A stronger dollar puts U.S. multinational companies who sell goods and services abroad at a disadvantage – because their products become more expensive to foreign buyers. Indeed many large CEO's including Caterpillar and Boeing have cited the strong dollar as a headwind for earnings and revenues in recent earnings outlooks.

President Trump and his administration are "talking down" the U.S. dollar:

Gold investors may well have President Trump to thank for a more sanguine outlook for the metals complex ahead, in relation to the impact from the U.S. dollar.


Rising inflation pressures are another brewing storm that will provide underlying support to the precious metals arena in 2017. There is evidence that inflation pressures are building already. Oil prices have nearly doubled over the past year. Tighter labor markets – in the U.S. and also in Germany are boosting wages, which has a spillover impact on rising prices throughout the economy.  Inflation will likely rise faster than policy rates in the U.S., which puts pressure on "real interest rates."  Traditionally, gold is an inflation hedge and investors will turn to the yellow metal as inflationary pressures continue to build.


The latest reading from financial markets shows the June Federal Reserve meeting as the next likely time for an interest rate hike. Remember, the benchmark interest rate remains at historically low levels – below 1.00%.

A new swath of conflicting forces could emerge to foil the Fed's hiking plans once again. The central bank has been attempting to "normalize" the Fed funds rate for several years, but issues have kept cropping up that derailed the moves. Could the Trump administration become another factor pressuring the Fed to delay? Interest rate hikes would only act to strengthen the U.S. dollar and that the president already thinks the dollar is too high.

Adding it all up, the gold and metals markets see a positive backdrop for 2017. What's in your portfolio right now?