The 46-Year Record of Platinum-Gold Ratios

The gold to silver and platinum to gold price ratios determine the relative value of the precious metals and are useful parameters in deciding which metal to buy at any given time (Mercenary Video, March 19, 2016).

In a previous musing, I documented the history of gold and silver prices and gold-silver ratios from the United States’ abandonment of the gold standard in August 1971 to present (Mercenary Musing, May 9, 2016).

In today’s precious metals analysis, I focus on the distribution of platinum-gold ratios over the past 46 years.

The monthly average price charts for each metal from January 1971 to present are shown below: 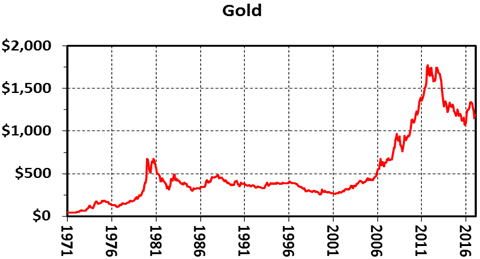 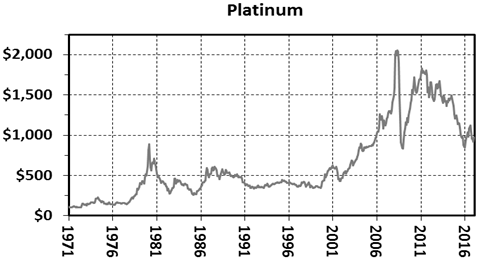 The price charts show similar patterns and a general correlation of gold and platinum prices. However, platinum is more volatile than gold and subject to parabolic spikes.

Platinum to gold ratios show wide variance over the 46 year period ranging from highs above 2.5 before and soon after Nixon began taking the United States off the gold standard to periodic lows below 1.0: 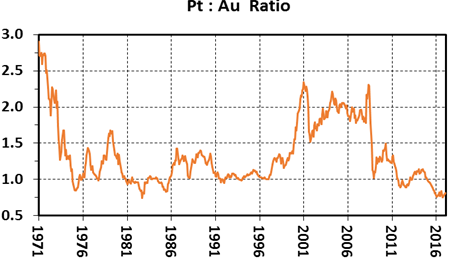 Our data set covers 553 months beginning in January 1971. The distribution of ratios in both tabular and chart format follows: 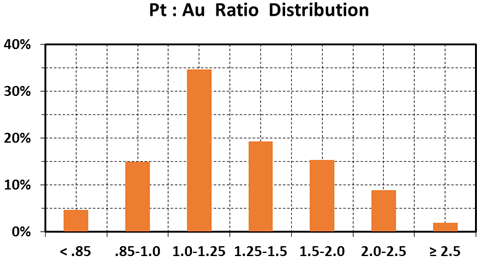 From our data set and the distributions of monthly average platinum-gold ratios from January 1971 thru January 2017, I glean the following:

From a compendium of sources, the average crustal abundance of both metals is around 4 ppb. Based solely on this fact, platinum and gold should trade at about the same price.

And indeed, our compilation shows that for nearly 50% of the time since gold was decoupled from the world’s reserve currency and allowed to trade freely on exchanges, the price ratio has ranged from 0.85 to 1.25. That said, since January 1971, the average price of platinum has been $637/oz and gold has been $518/oz for an overall ratio of 1.23:1. Clearly there are other factors other than the nearly equal crustal abundances that account for this historic price relationship.

A variety of supply and demand factors cause platinum to trade at a premium to gold:

Fluctuations in the relative prices of platinum and gold are largely driven by:

In my opinion, gold is the only real money. Thus it is my safe haven of choice and insurance policy against financial calamity.

Platinum functions both as a precious and industrial metal. It is usually tied to the price of gold in both short- and long-term trading patterns. In times of financial distress and economic turmoil, platinum tends to behave more like gold with widespread hoarding.

When ratios are very low, I choose to buy platinum instead of gold. Note that the mark-up to buy or sell platinum is two to three times higher than for gold; that additional cost becomes a factor in my evaluation process.

I strive to maintain 10-20% of my net worth in physical bullion. Most is in gold but I always have a portion in platinum and silver.

As a hoarder, my basic strategy for accumulating gold or other precious metals is to buy during downticks in price regardless of a bull or bear market cycle. In a previous musing, I showed that there is seasonality to the gold price and that the best time to buy is from mid-June to mid-August of any given year (Mercenary Musing, January 4, 2016). The same strategy can be applied to platinum.

Once again folks, that is the way I see it.

And the way I do it.