What Financial Disaster Awaits Us Next? 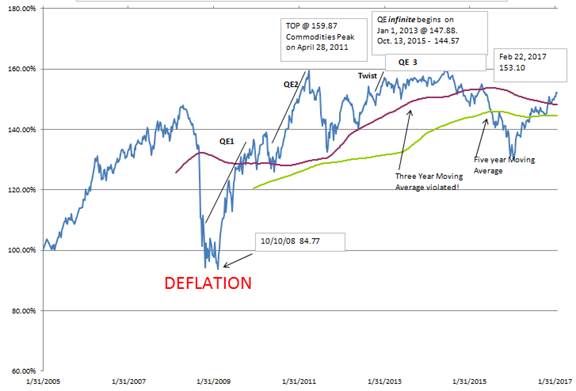 When humans attempt to defy the laws of nature, chaos and destruction are the end result. And boy, do we ever have examples of nature being destroyed by economists and social engineers in general!

Our Founding Fathers, who were readers of Adam Smith, understood that if the laws of supply and demand were obstructed by government, it would lead to economic chaos and poverty. That is an understanding that has escaped self-proclaimed economic experts who thumb their noses at free market schools of economics like the Austrian school. They choose instead to believe the big lie that somehow a small number of Ivy League PhD economists know better than does the collective wisdom of markets what interest rates should be or how many cars should be manufactured.

The most grievous error of course was to not allow markets to determine what is used as a medium of exchange and store of value. Central banks have messed up the market and at this stage I and many other free market advocates believe the global economy is now messed up beyond repair. Only a massive destruction of the existing order can wipe the slate clean for a return to the understanding of our Founding Fathers that the best government is the least government. Of course along with that notion, our Founding Fathers also understood that a faith in our Creator was essential if free market capitalism were to work well. Now that all those traditional values are, by and large, gone, the only thing we have to look forward to is more and more economic and social chaos, followed no doubt by growing government tyranny. I wish I could be more optimistic, but that is the way I see it.

Still, no matter how gloomy the future may be, we still owe it to ourselves, our families, and ultimately to our Creator to do the best we can to live lives that, at least within our own smaller social unit, provide peaceful and productive lives. So as we look into the future, we need to prepare as best we can. And since this letter has to do with investing, the big question on my mind for many years has been how does the anti-free market pathology implanted by policymakers play out? Does it play out through some hyperinflationary depression or through a deflationary implosion similar to or possibly much worse than that of the 1930s?

I expect to explore that question with Doug Casey on my radio show sometime in March. Doug wrote an excellent article comparing the 1930s to the present time and he provides some great insights into this question as to how the pathology created by the Federal Reserve in the 1930s compares with this even more pernicious economic pathology caused by the modern-day Fed.

In truth it is impossible to know how things will shake out, because we are not omniscient. My own thinking is that Fed is now in a tightening mode because even the die-hard Keynesians have finally come to realize that their money printing policies of QE1, QE2, the Taper, and QE3 all have failed miserably. So they are pretending that the economy is on the mend to give them cover to allow rates to rise in order to restock ammunition for the next major economic catastrophe.

I devised my IDW (pictured above) in January 2005 in order to get a sense as to whether the global monetary system was expanding or contracting. Clearly we had a few months during the 2008-09 banking crisis when my IDW flashed “DEFLATION” when the IDW fell to 84.77, which represented a 15.23% decline in my IDW from the January 31, 2005, start at 100.00 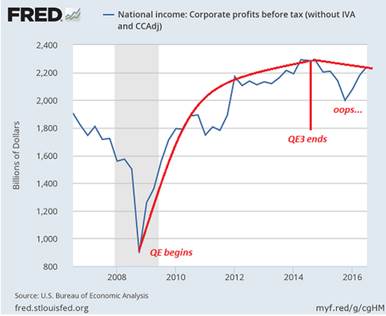 With all manner of market manipulation, most significant of which was massive money creation through QE1, QE2, the Twist (Fed bought long end of the curve), and QE3, nature’s cleansing act—which could have wiped the slate clean and enabled a return to honest growth (assuming we also returned to honest asset based money)—was aborted. And as you can see from my IDW above, QE1 and to a lesser extent QE2 seemed to work, at least in terms of stimulating stock and commodity prices. However, just as with a ball thrown into the air, there is a limit to how high it can go before it stops rising and begins to descend. As of this week, stocks are still hitting new highs. However, the fundamentals behind the rise in stock prices are becoming ever more suspect, as the chart on your left suggests.

The red line is drawn to show the direction of corporate profits that took place with QE1. The rate of growth slowed decidedly during QE2 and slowed even further with QE3. When QE3 ended, corporate profits went into reverse and started a decline. This corporate profit picture more than any other is the reason I worry about a return to waterfall decline akin to that pictured on my IDW during the 2008-09 financial crisis, which was triggered by an extremely over leveraged financial system. 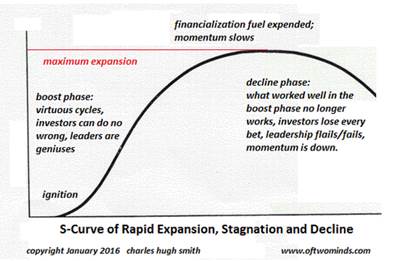 Yes, stocks have continued to rise in no small part because cheap money has enabled the buyback of shares, but if profits are in decline because of natural limits, not only might additional money creation fail to stimulate higher prices but given the massive indebtedness that has been growing much faster than GDP (see chart lower left), more money creation might actually lead to a decline in stock and commodity prices as the system declines under the weight of its massive debt load. 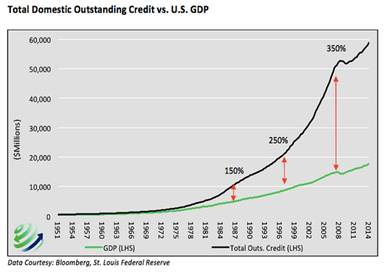 However, the dollar bill that you take to the teller to lend to the bank has absolutely zero intrinsic value. Once upon a time, in keeping with the U.S. Constitution, you could take your dollars to the bank and request a certain amount of gold or silver in exchange. At that time we had an asset-based monetary system, and while we had a fractional reserve banking system (meaning that there was only enough gold in the banking system to enable only a small fraction of the population to receive gold in exchange for paper, the system, unlike now, had some legitimate integrity.

When Nixon removed gold from the international monetary system in 1971 that was the end of what remained of integrity and honesty in the dollar and international monetary system. Without the discipline of gold, politicians could, or so they thought, replace God as the giver of all things which they proceeded to do with mountains of debt based money. Given their humanistic hubris, policy makers saw no harm in allowing debt to grow exponentially while income in the system grew at best in a linear fashion as the chart above illustrates.

Therefore, paradoxically, the more debt money that is created, once the system no longer can expand, the more insolvent and less liquid the system becomes. I believe we may be at or very near that point now, for a host of reasons. There are too many to go into right now. But in conjunction with the chart above that shows how inept QE is at this point in time to stimulate higher corporate profits, I would make two very important observations:

Simon has some advice for his readers. To learn more you can access his entire article by going to Miningstocks.com, and click on the link to “The US stock market is highly overvalued. Here’s why…” dated 2/24/17 and listed under the various newsworthy links. 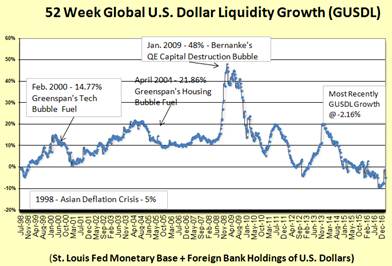 A seasoned market analyst named Bob Hoye has written about how the senior currency in a global system is inclined to get stronger, not weaker, when the system begins to meet the level of unsustainable debt. That occurs no matter how much money is created, because as we just said, our monetary system is a debt-based system. The more money created, the more debt is created, and once you reach that optimum point of asset price inflation, the senior currency—in this case, the dollar—gets stronger and stronger.

The reason that happens is because as the leading currency there is more dollar debt in the world than debt in any other currency. So as the global system begins to implode, all manner of assets must be sold in order to repay debts.

I have continued to calculate what Charlie Clough of Merrill Lynch called the 52 week Global U.S. Dollar Liquidity Growth. Clough began charting this statistic just after the Asian crisis because he could see that the major financial problem the world faced was that foreign nations had so much U.S. dollar debt but so few dollars to service those debts. And so assets would need to be sold, thereby lowering the price of those assets, which meant even more had to be sold, causing a downward asset price spiral. The chart above shows two Greenspan bubbles after the Asian crisis that led to massive stock market declines—the dot-com bubble of 2000 and the housing bubble of 2008-09. Greenspan tried to contain this measure of global reserve currency growth, but the 10% to 13% growth range was insufficient at that stage to keep the system solvent. So down we went with the 2008-09 crisis. 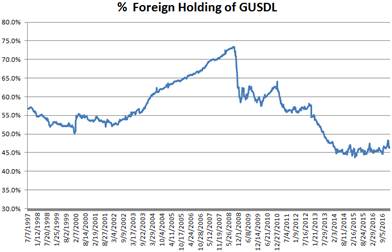 GUSDL is comprised of Federal Reserve Monetary Base plus foreign bank holdings of U.S. dollars. It is the foreign bank holdings of U.S. dollars that cause me to worry now. Note the dramatic drop since the 2008-09 crash and the introduction of QE. With QE, the Fed simply caused the portion of foreign dollar holdings to fall precipitously. Foreign holdings of U.S. dollars have fallen from over 70% before the housing market depression to around 45% now. And while the decline has stopped, with the dollar getting stronger over the past year, it exacerbates the insolvency of foreign institutions owing dollars and increases dollar illiquidity globally. At the same time, for whatever reasons, the Fed seems to be suggesting it will stop printing more money, which can only lead to still less dollar liquidity globally.

The Inflationary Export-Driven Trump vs. the Pro-Banker Fed

Last week President Trump suggested that he wants a weak dollar to help U.S. exporters. This is coming at the same time that Fed is signaling higher rates and a tighter dollar. Trump’s policies are inflationary. The Fed’s tightening figures to be deflationary, leading to still more insolvency and illiquidity. We shall see who wins that battle, which is bound to cause all manner of sparks to fly. I wouldn’t bet against the Fed because they are the financier of the “deep state.” Either way, stocks are historically overpriced and on the precipice of a major bear market.