Gold Gets Trumped Up

The near-term weakening for which we were seeking in Gold never materialized a wit throughout the four-day trading week, Monday and Tuesday combining to push price +1.6%. Then come Wednesday upon the chief executive's stating "I think our dollar is getting too strong", Gold leapt another 0.9% in just two hours. Cap it off with the looming geo-political uncertainty and queasiness surrounding "Holy Taxes Week" and in came Thursday's piling-on crowd to drive Gold to this year's record high close-to-date. So what does being at 1290 mean?

Exactly, Squire. But before we officially invert its name to the 1280-1240 support zone, which per the below chart of Gold's weekly bars was the case through a good stint of last year, let's first see if price can stay above 1280 over at least a full trading week. For the present, as would a Formula One race engineer radio to his driver: "Your pace is good, Lewis" ... however the circuit, like price, does not unfold in a straight line. From the Gold Philosopher's chair, 'tis been eloquently waxed upon that those forces which drove Gold down from its high back in 2011 shall in turn drive it back up. So if "they" indeed have been materially on board throughout this parabolic Long trend -- now 13 weeks in duration and thus far the third longest since Gold's All-Time High of 1923 on 06 September 2011 -- then let's look toward last year's high up there at Base Camp 1377... 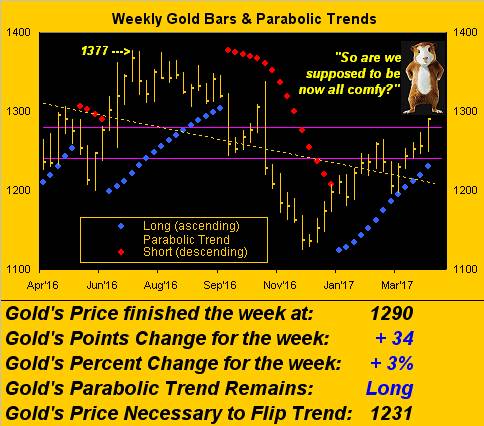 ...if instead "they" are not materially participating, be it due to tightening Federal Reserve Bank policy, Dollar strength, and/or threatening geopolitics being deemed as overblown, then Gold is again subject to slipping back into that purple-bounded resistance zone. And most broadly, remember: in the 42-year span from 1975 through 2016, Gold's low for the year -- as was the case last year and is so far this year -- has come on the first trading day just three times, and never in two consecutive years. 'Twould remain the case should 1146 bust by year's end ... but let's not go there, ok "they"?

That said, we remain technically watchful for the precious metals' "Baby Blues" to crack, upon the verge of which you can below see they were a week ago (red arrows). So as we go 'round the BEGOS Markets complex for the past 21 trading days, as regular readers know the blue dots represent the day-to-day consistency reading of each market's 21-day linear regression trend, (the diagonal grey lines). Clearly over the past month, 'tis been the safe haven markets getting the bid: that is where the action is, in spite of our FinMedia friends remaining far more focused on stocks, which as represented by the "Spoo" (S&P 500) is actually the least dynamic area of the BEGOS bunch: 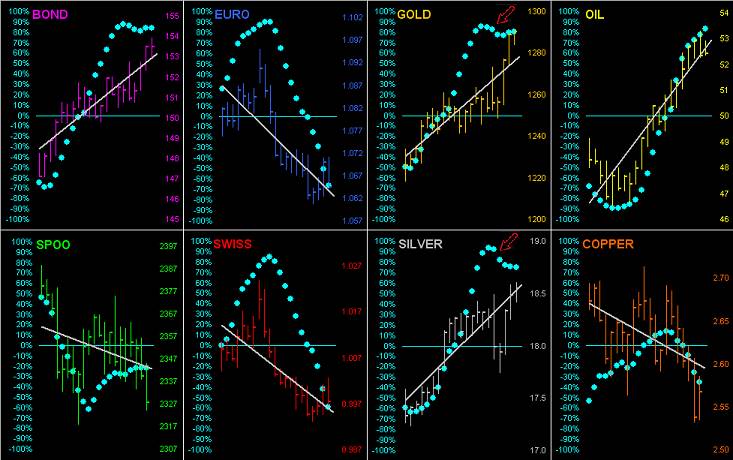 Moreover, bearing in mind that our "live" price/earnings ratio for the S&P is presently 34.5x, we nonetheless read this past week that "Earnings will drive the stock market ever higher" and that "The S&P 500 still has another 15% pop left this year." But what is suddenly lacking "pop" is the Economic Barometer. Given that the timing of this past week's incoming EconData was sufficiently back-loaded such that many folks were otherwise preoccupied both in happily buying bunnies and in gleefully doing taxes, we noted that for March: retail sales shrank by 0.2%, wholesale inflation shrank by 0.1%, and retail inflation shrank by 0.3%. Shall next week's lagging report on March's Leading Indicators also have shrunk? Here's the suddenly incredibly-shrinking Econ Baro:

A short-term down-blip as that may be for the Baro, how's that Fed Bond-tapering tranquility feelin' for ya as they look to sustain rather than stimulate economic growth? Is it too early to utter "Oops"? 'Tis not too early to buy Gold, dip or otherwise.

And even should we so dip, where would one find grip? To the 10-day Market Profiles we go wherein on the left for Gold we'd look for 1255 to hold; as reiterated a week ago, to the extent that the yellow metal has again capitalized on geo-political jitters may then see such gains evaporate as oft is Gold's wont. As on the right for the white metal, given Copper's miserable performance as late, should Gold let go, down through 18.25 we'd see Silver blow:

Either way, with Gold presently at its year-to-date high, here's how it appears in the stack:

Gold's Value per Dollar Debasement, (from our opening "Scoreboard"): 2670

Trading Resistance: none (per the 10-day Market Profile)

Finally, we've this: do you have difficulty wrapping your brain around how much is one trillion? Especially for followers of Gold, the magnitude of one trillion is important to understand given the level of the money supply (Stateside M2 now over $13 trillion), unrepayable debt (about $19 trillion), and unfunded derivatives (arguably for banks some $250 trillion). So how can one actually see one trillion? Try this:

You've no doubt have read of the 21,600-pound MOAB ("Massive Ordnance Air Blast") GBU-43/B deployed this past Thursday. The unit's length is 30 feet. So in maintaining economy-of-scale, were the weight to have instead been one trillion pounds, the corresponding length would be 1,388,888,889 feet. Next divide that by 5,280 feet/mile and you've an anatomically-correct 263,047-mile long bomb. The distance from here to the moon? 238,900 miles. Now envision that monetarily. Got Gold??? 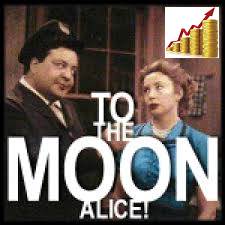