It's the question everyone is asking right now: How high can gold rally in 2017?

Investors around the globe have turned to the gold market in recent years for a variety of reasons. Some investors are looking to protect their wealth against central bank fiat currency devaluation. Others see gold as a safe-haven in an increasingly unstable geopolitical landscape. While another group of investors pile into gold as a way to protect their purchasing power as the insidious power of inflation erodes their future wealth.

There is another group of traders – the technical guys – who look to the charts for answers. There is an old market adage: "It's all the charts." Relying on both perspectives – let's take a look at what the charts are showing for gold now and in the future.

Market snapshot: Gold is already outpacing the U.S. stock market by over a 2:1 margin. Silver is the strongest precious metal year-to-date, gaining an impressive 15%, while gold is not far behind with a solid 11% return through April 14. Meanwhile, the stock bull is showing its age is tired, lackluster and ready for a nap, as the S&P 500 is up 4%. How high could gold rally in 2017? Let's take a look.

We'll start with a top down approach, looking at the monthly charts. It was back in 1979-1980 when gold made its then historic run to the $873 an ounce zone. Economists call that period leading up to that point: The Great Inflation, which lasted from 1965-1982.

The Great Inflation was the defining macroeconomic event of the second half of the twentieth century, says Michael Bryan, economist at the Federal Reserve Bank of Atlanta. During that time there were:

The combination of those circumstances supported a parabolic bull run in gold. See Figure 1 below, a monthly chart of nearby Comex gold futures. 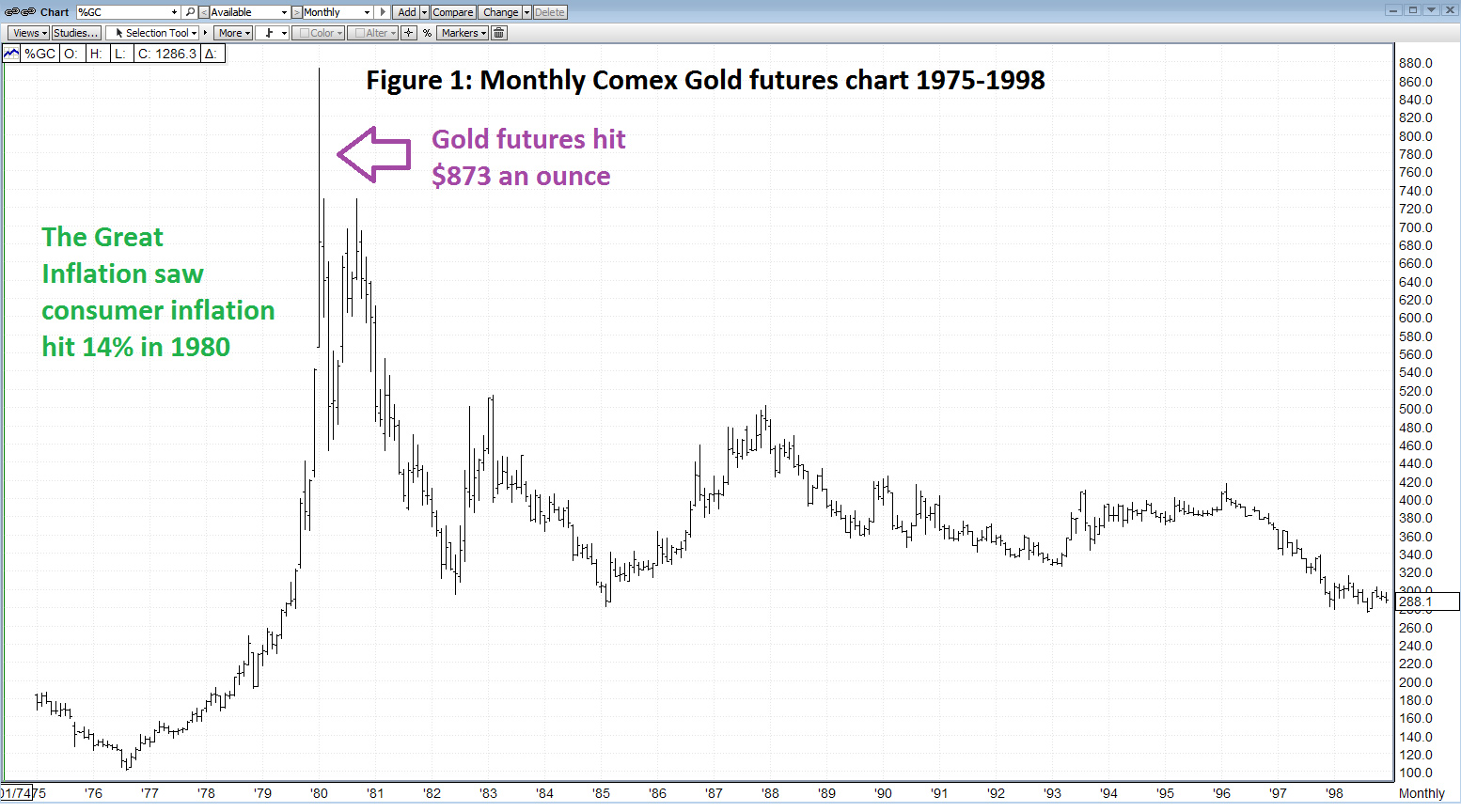 The dot.com crash woke up gold bears from their roughly decade-long hibernation and prices began to rally from there. Figure 2 shows the gold market rally from the $255.00 an ounce zone in 2001 to the all-time high hit in 2011 above $1,900 an ounce. 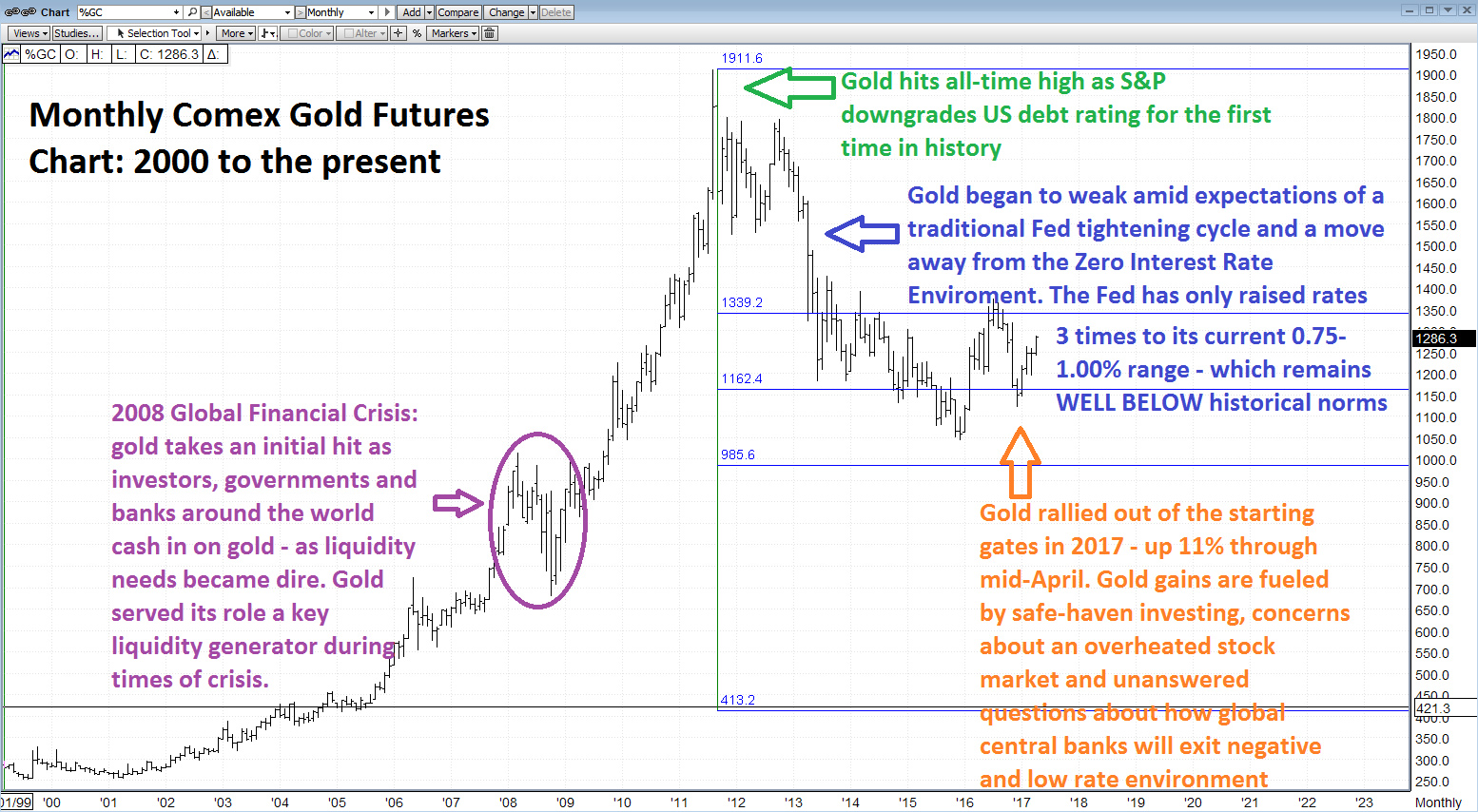 Chart Talk: A Fibonacci retracement is drawn on Figure 2 in blue. What is notable technically is that gold has retraced just over 50% of its rally, and is now climbing. Gold did not drop to test the 61.8% level of the long rally from the early 2000s.

Technically – that means the long-term uptrend in gold remains intact. The sell-off the December 2015 low at $1,046 an ounce was corrective in nature.

What lies ahead? Let's take a look at the daily Comex June futures chart, seen in Figure 3 . 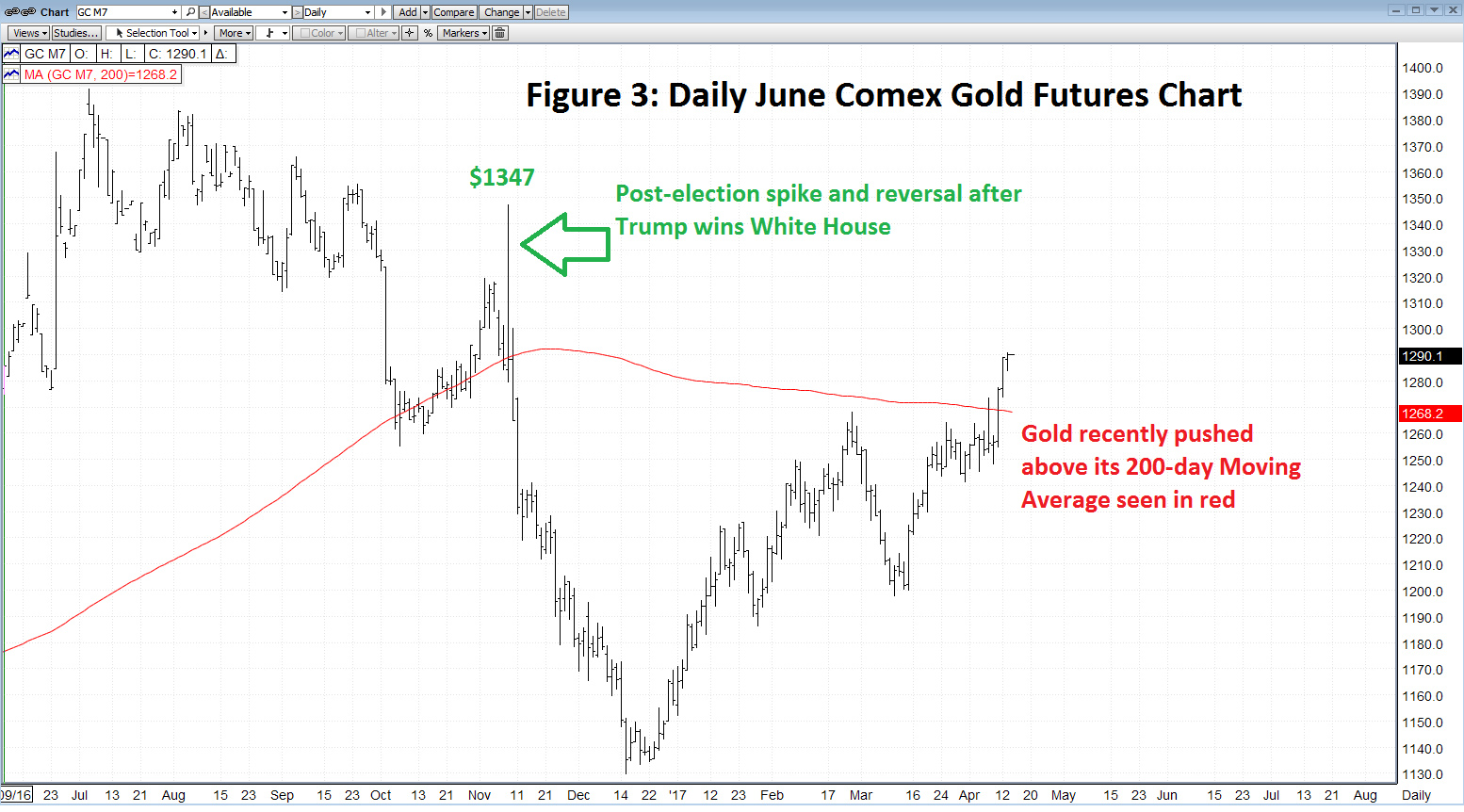 The first target for gold bulls is to retake the post-election spike at $1,347 an ounce. Gold is in the midst of a bull run phase and is overbought currently. A consolidation phase is likely before gold retakes the $1,347/$1,350 zone.

Trading tip: Dips will be used as buying opportunities by long-term investors.

The $1,400 an ounce level is within reach in 2017. The chart shows an uptrend. Gold has climbed above its 200-day moving average and the long-term trend remains bullish.

What could be the macro triggers that send gold to that level? You pick. There's a lot to choose from:

Any or all of these factors could unfold in the months ahead. The 2017 rally in gold is just getting started. Dips will be used as buying opportunities. What's your trading plan?

By The Technical Trader