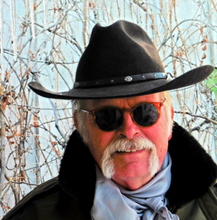 Bond guru Jeffrey Gundlach of DoubleLine Capital noted in his 2017 forecast that the copper-to-gold ratio is a "fantastic" coincident indicator of interest rates. I tested his thesis by constructing a 2-year regression model of the U.S. 10-year Treasury yield given daily Comex copper and gold prices. The results are stunning.

Figure 1 compares the model output to the 10-year Treasury yield. I chose the gold-to-copper ratio (GCR) for this analysis since we think in "pounds-of-copper-per-ounce-of-gold" in Northern Nevada - Gundlach correlations are positive; mine are negative.

Recent geopolitical concerns and uncertainty about the timing and efficacy of the new administration’s domestic policies have caused a spike in the GCR and decline in U.S. interest rates. As market participants run to safe havens gold and U.S. Treasurys, they typically retreat from “risk-on” assets like copper. Rising gold and declining copper prices raise the GCR while higher bond prices produce lower yields. At last week’s close, the GCR was at an elevated 497 pounds per ounce and the 10-year Treasury yield plumbed a low 2.230%.

The error standard deviation between the model and actual yield is less than 15 basis points (bps). The goodness-of-fit, or “R-squared,” is a respectable 0.78 – the closer to 1.0 the better. The correlation of the 10-year yield over this two-year period is a very tight -0.88. 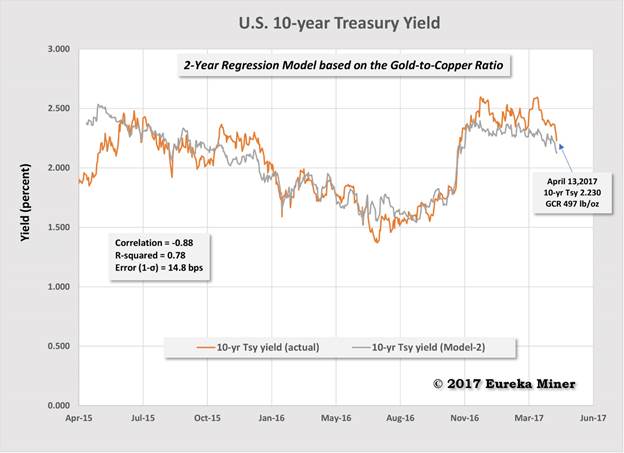 Interestingly, the correlation holds up for longer periods. Extending the model to a three-year period results in a correlation of -0.84 and a slightly greater model error of 17.6 bps and lower R-squared of 0.70.

The rapid de-correlation of copper with gold sets an alarm in my world. A correlation map is a valuable technique for detecting this event and, by the Gundlach relation, a likely drop in interest rates. Figure 1 is the three-month (Y-axis) and 1-month (X-axis) correlations of Comex copper and Nymex oil (WTI) with Comex gold. 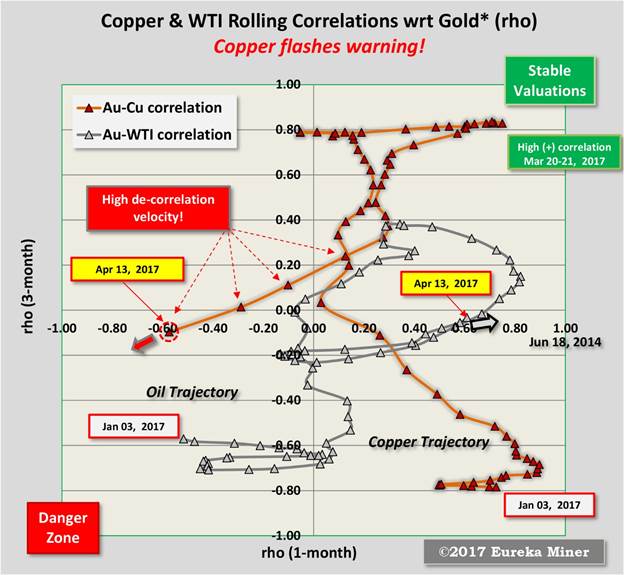 I increased positions in Pimco's BOND & Gundlach's DoubleLine TOTL bond funds when copper started to fall away from gold post-March 21 (see chart). Both funds have bullishly trended higher since mid-March. Please do your own research; today’s markets can turn on you faster than a feral cat.