Mr. Robert Friedland is the recipient of the 2017 Northern Miner's Lifetime Achievement Award, and when the legendary mining billionaire offered his rare insights on vanadium in a recent interview with The Northern Miner, I paid my full attention. Mr. Friedland stated:

“We think there’s a revolution coming in vanadium redox flow batteries,” he says. “You’ll have to get into the mining business and produce ultra-pure vanadium electrolyte for those batteries on a massive scale.

We’re very deeply interested in how you store electrical energy in the grid.

Like Mr. Friedland, I favor the fundamentals of vanadium, which is embarking on a stealthy run in price that very few exploration and mining investors and commodities observers have yet noticed. Below are charts of vanadium (vanadium pentoxide or V2O5) price and the stock price of two companies active in vanadium, an exploration company and a mining company to illustrate this stealthy run. 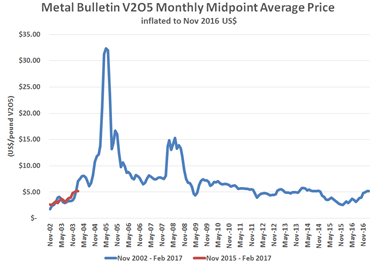 The thesis of vanadium bullishness lies in the use of vanadium redox flow batteries (“VRBs”) to complement the explosive growth of grid-scale wind and solar energy generation capacity, which has increased more than 7-fold in the last 10 years. Large VRBs have characteristics that allow storage of wind and solar-generated electrical power and release of that power during times these generators cannot generate power. VRBs also improve the economics of wind and solar energy generation and enhance grid operation. 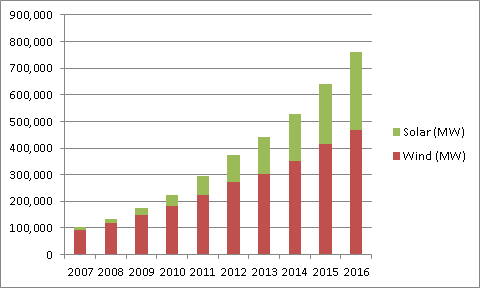 The mechanics of renewable power generation is simple. Thanks to science and technology, the average total cost to build and operate a power-generating asset over its lifetime divided by the total energy output of the asset over that lifetime (the “levelized cost”) of wind and solar energy are now the lowest of all commercial energy sources, an unthinkable proposition only a few years ago. 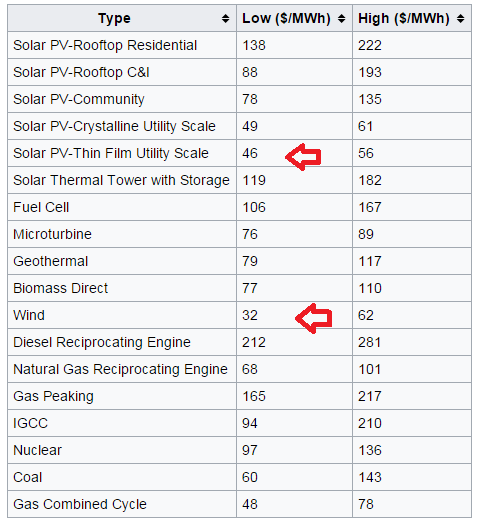 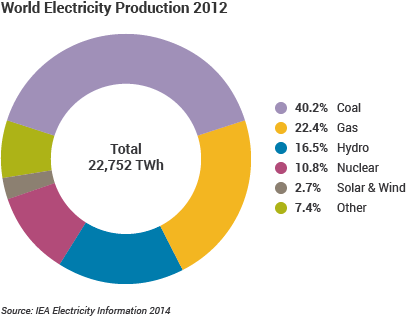 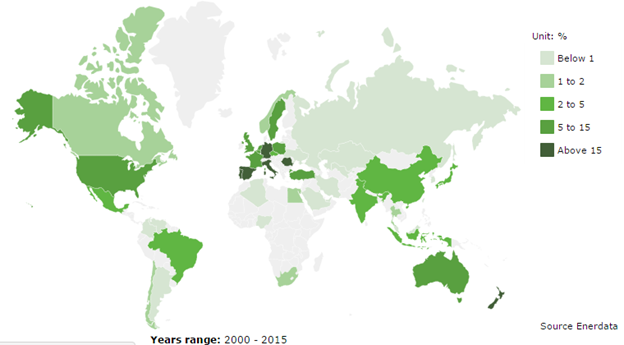 “On an unusually windy day in July 10, 2015, Denmark found itselfproducing 116% of its national electricity needs from wind turbines yesterdayevening. By 3am on Friday, when electricity demand dropped, that figure hadrisen to 140%.

Interconnectors allowed 80% of the power surplus to be shared equallybetween Germany and Norway, which can store it in hydropower systems for uselater. Sweden took the remaining fifth of excess power.

’It shows that a world powered 100% by renewable energy is nofantasy,” said Oliver Joy, a spokesman for trade body the European WindEnergy Association. “Wind energy and renewables can be a solution todecarbonisation – and also security of supply at times of highdemand.’”

“Under the proposals, the scope of Sweden’s market-basedsupport scheme of renewable electricity certificates will be extended to helpincrease income for energy producers in Sweden and Norway. Proposals alsoinclude reducing the tax burden on installation costs for offshorewind.”

Even the not-so-sunny or windy Germany managed to generate 29.5% of itselectricity in 2016 from renewables. 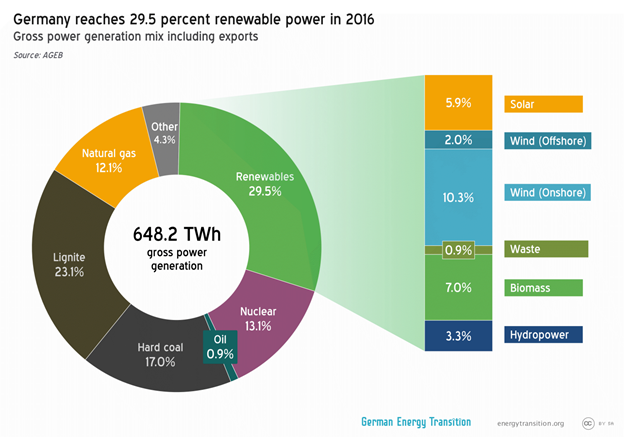 If solar and wind energy capacity sustains an annual compounded growth rateof 10%, the world would generate about 20% (from the current 6%) of itselectricity from those resources by 2030. Such a scenario is entirelyplausible, if not too conservative, and we are well on the renewablerenaissance path.

“50 parks with at least 500MW capacity each will beconstructed.

That 40,000 MW represents the capacity equivalent of 40 modern nuclear powerplants.

China has the longest 800kV Ultra High Voltage Direct Current Transmissionline: 2,192km Hami–Zhengzhou completed in 2014 and 3,400km lineZhundong–Wannan to be completed in 2018*. The same technology couldtransmit excess wind power from San Francisco at 6 am to Houston at 8 am (~3100km), while capturing solar power from Houston at 8 am and transmitting it to adark cloudy, stifling New York city at 9am (~2600 km) in time for the WallStreet opening.

Indeed, with the capacity of solar and wind energy increasing and enhancedby VRBs and efficient long distance transmission interconnectors, the futurecapacity and deployment of wind and solar energy is practically limitless andthe levelized cost will further decrease. By comparison, nuclear energyproduction has stagnated since 2000 due to rising construction time and cost. Amodern 1,000 MW nuclear reactor plant can take up to 10 years and US$10 billionto build. 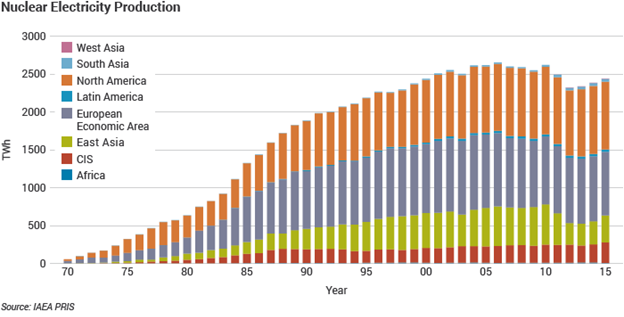 To me, vanadium clearly offers a better upside than uranium.

Besides the inability of simultaneous charge and discharge pointed out byMr. Friedland, lithium ion-batteries are not ideally suited for grid-levelenergy storage because they have a short-duration discharge cycle and begin todegrade after a few hundred cycles of fully charging and fully discharging (or1,000 cycles at most), whereas vanadium batteries are non-flammable and canoperate for 10,000 cycles.

This year, I have written three articles about vanadium and vanadium redoxflow batteries, which are worth a read:

Vanadium Redox Flow Batteries: The Next Big Wave After LithiumBatteries

Death of Uranium and Renaissance of Vanadium (in Energy Storage)

How do investors profit from the upcoming renewable energy renaissance andthe pent-up demand for VRBs?

Over half of the VRB cost is vanadium. Vanadium is primarily used as a steelstrengthening additive with less than 10% of worldwide vanadium supply usedtoday in batteries. Given that there are no vanadium strategic stockpiles , anyincrease in vanadium redox flow battery demand will cause an increase invanadium price.

Unfortunately, there is no vanadium ETF, and vanadium does not trade oncommodity exchanges such as the COMEX or LME, which makes buying the variousforms of vanadium challenging.

The other option is to own vanadium mines. Vanadium is mostly produced as aby-product from processing titanium iron ore. However, there are a couple ofprimary vanadium deposits, such as the active Maracas Menchen mine in Brazil,and the feasibility stage Gibellini deposit in Nevada, which ProphecyDevelopment Corp. (TSE: PCY, OTC: PRPCF) had just announced it will acquire.

I am siding with Robert Friedland and believe both vanadium and vanadiummining companies represent excellent value to investors at current prices.

I don’t own vanadium metal; however, I own 19% of Prophecy DevelopmentCorp.