The subject of gold’s confiscation has come onto our screens again, but this time, being described as a “Myth” in the future. This thought comes from Canada, a favorite place for U.S. citizens to store their gold in the hopes that it will be outside the reach of the U.S. Federal Reserve.

We respond to the article that described it as a myth, because we are firmly of the opinion that as we move from dollar hegemony to a multi-currency, world currencies will find themselves competing against each other [race to the bottom] and increase the prospects for the confiscation of gold held in storage companies and by dealers as well as making such dealing illegal again.

This makes the confiscation of gold and eventually silver, a future reality. It is impossible to give a date when this will happen making now a prudent time to act.

a) In this article we will look at the real reasons why the U.S. confiscation took place and its broad objectives as well as the underlying principles behind the confiscation and how they can apply in the future.

b) We will show how the confiscation of gold in 1933 was not a money supply issue, nor will it be in the future.

c) We will highlight why such underlying principles are beginning to appear now, as this new global monetary system arrives on stage.

d) We will explain why gold is becoming an increasingly important reserve asset and will become needed by governments in the future.

e) We will explain that holding gold outside ones country will not guard it from your government’s hands unless structured properly to protect you and your gold [and in the future silver] from them.

f) We will also explain why important trading nation partners to governments confiscating gold in the future may well act in support of those confiscators.

g) We will look at the need for governments, through the banking system, to control money flows internally but will need to maintain confidence in their currency, to permit it to be used internationally.

h) We will look at how gold can be an anchor for currencies and how its price can be raised against their currency to maintain its acceptance.

i) We will look at how the slow move towards a cashless society being seen in the future must extend to gold and silver.

a) The real reasons why the 1933 gold confiscation took place.

It is commonly accepted that a ‘confiscation’ took place simply because owners of gold were forced to hand over their gold at an official price below its market value. Some may use the term ‘appropriation’, but ‘a rose by any other name, smells as sweet’. We have heard of the theory that it was aimed at increasing the money supply. Such a theory ignores the fact that the price of the dollar was devalued by around 75%. This is usually expressed as a revaluation of the gold price, but it was the dollar that had a valuation problem not gold. This happened two years after the confiscation of gold.

When the dollar was devalued two years later it was for a different reason in a different set of global circumstances. [See the section on Money supply]. 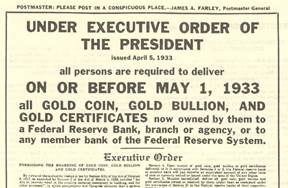 Please listen to the speech of President Roosevelt which gives a clear picture of both the banking crisis and how gold was then used to back the dollar. President Roosevelt states clearly that after the confiscation bank lending was ‘against good assets’!

Listen to Audio:Audio mp3 of Address

In his speech accompanying the Order, the President focused on the banking crisis then, that had led to the extended bank holiday that allowed time to rescue the banking system. The panic that had ensued had caused many Americans to hoard cash and gold, thereby reducing the money supply and its velocity to the point of the collapse of the banking system.

He stressed that the currency [the dollar] was not ‘fiat’ but was money issued against good assets.

Before the act of gold confiscation, the U.S. citizen knew he had an alternative to the banking system in cash and gold. Gold is both an asset and cash!

Cash was an item seen as separate from the banking system as it was freely used by all most transactions in business and the home with the banks generally outside the daily cash transactions. Over the years they have become far more intrusive, almost controlling liquidity in the nations of the west. As you can see from the ‘dollar bill’ below, the dollar was measured by gold. So, cash and gold drove the economy then.

The two, cash and gold therefore acted as effective competition to the banking system with gold holding up the credibility of the system!

In turn, this posed a threat to the control of the monetary system through the banks. Trust in gold in those extreme times was and still is, absolute.

Most importantly, by confiscating gold, the control of money [and gold] was placed solely in government’s hands and the institutions under the control of government. At the same time he made the ownership of gold coins and bullion illegal for US citizens anywhere in the world. This also closed down gold dealers and storage companies for the next 41 years.

Most importantly, the competition posed by gold was removed and placed in support of the banks and the dollar. It seemed a sleight of hand but changed the monetary system completely, inside the U.S.

Do private holdings of gold, today in the U.S. pose the same threat to the banking system? No! During the 41 years of the ban on gold dealing in the U.S. or its export, a new generation grew up that knew little to nothing of the power of gold. They knew only the dollar as money.

Gold as money was vilified and removed from the system both nationally and between nations [as per the I.M.F.’s dictates]. At citizen level it was deemed as an archaic, barbarous relic, over time.

Internationally, the story was very different. Gold has remained as an important Reserve Asset in ALL nations, throughout the years from then through to now. While the International Monetary Fund forbade the use of gold in settlement of nation’s debt, gold continues to be heavily held by the globe’s main central banks:

If gold were no longer critical to a nation’s international creditworthiness, why would the world’s leading nations hold it?

It is clear that government will never be repaid except by the issue of more currency and more debt. Like the Special Drawing Right of the IMF such currencies are simply issued, not against assets or good or gold, simply issued against nothing!

When the U.S. citizens were allowed to own gold in 1974 once more, it was clearly stated that this was a privilege, not a right!

As in 1933 a nation’s gold sits behind its currency in support of citizen level.

In summary, gold was confiscated to prevent it from competing with the U.S. monetary system and to take the confidence it garnered and place it behind the dollar and the banking system. It acted to save the banks and monetary system from collapse!

b) The confiscation of gold in 1933 was not a money supply issue, nor will it be in the future.

It is true that the money supply needed to be increased in the U.S. in 1933, tremendously because of the Depression. The concept of increasing the price of gold was not present in 1933. Both Ben Bernanke and Alan Greenspan indicated so.

But Alan Greenspan indicated it was how the Gold Standard was being applied that was the problem. The elevation of the price of gold or the devaluation of the dollar could have resolved this problem far earlier than 1933.

There was absolutely no reason why a delay of two years took place before the dollar price of gold was changed if money supply was the issue.

Why the devaluation of the dollar?

What was happening in Europe with war approaching placed another issue on the table, the rise of Nazi Germany and the threat to European gold holdings.

This left the price of gold in the U.S. at $35 an ounce and at $20.67 an ounce outside the U.S. Given the regime of fixed exchange rates at the time the arbitrage opportunity of buying in London and shipping gold to the U.S. was exceptional. The central banks of Europe accepted this and held their dollars in the U.S. ahead of the start of the Second World War.

Following the war until 1971 the major European central banks took the dollars paid into Europe [the Eurodollars] and bought back their gold at the $35 an ounce, the same price at which it was sold to the U.S. Fed. Once that process was completed, the U.S. government holdings of gold dropped back to 8133.46 tonnes of gold bullion, where it is today.

The money supply in the U.S. was elevated considerably by the receipt of European gold, while it went through the most destructive war man has ever known. But it was not to elevate US. money supply, that the gold was sent to the U.S.

If gold had been confiscated so as to increase the money supply, the question arises, “why did it end up being confiscated for 41 years? Again, there was a far deeper structural reason for this and for the period over which it was confiscated.

We repeat the U.S. citizen was weaned off gold over 41 years to prevent him from seeing it as an alternative to both the dollar and to the U.S. banking system. The U.S. citizen is now absolutely dependent on the banks he uses, doing absolutely nothing without them, including drawing cash!

The statement Alan Greenspan famously made, that “Gold is money, in extremis”, he is now repeating. Recently, in an interview with the Council of Foreign Relations, Alan Greenspan gave a remarkable comment that backed up his original beliefs in gold. He stated that in his honest opinion, "Gold is a currency. It is still, by all evidence, a premier currency. No fiat currency, including the dollar, can match it." Nothing has changed over the last 84 years.

But such words confirm the threat gold made in 1933. Central Banks will never allow gold to threaten national money again!

In the next part of this series, we will start by looking at events today that are pointing towards the confiscation of gold in the future [point c and d].

We will later look at how neighboring countries such as Canada, would support the U.S. government in the event they confiscated citizen’s gold including that held in storage in Canada [point f].

gold-authenticmoney@iafrica.com
www.goldforecaster.com
Disclaimer: The views expressed in this article are those of the author and may not reflect those of Kitco Metals Inc. The author has made every effort to ensure accuracy of information provided; however, neither Kitco Metals Inc. nor the author can guarantee such accuracy. This article is strictly for informational purposes only. It is not a solicitation to make any exchange in commodities, securities or other financial instruments. Kitco Metals Inc. and the author of this article do not accept culpability for losses and/ or damages arising from the use of this publication.