The gold sector has been particularly difficult to gauge during the past few months of trade. Gold miner participants have been whipsawed between numerous market catalysts, as the lagging GDX action in relation to the recent gold surge has had investors on edge.

Early last week, mounting geopolitical worries including upcoming elections and terrorist attacks in the UK caused the gold price to rocket towards the $1300 level. The daily breach of the 6-year downtrend at $1280 in the gold price had many pundits calling this a bullish breakout, only to have the sector begin to reverse just before the UK election. The GDX also made a large daily move upwards with the gold price early last week, only to end the week’s trade with a nasty bearish reversal candle when the UK snap election results were announced.

Nevertheless, many of the oversold junior miners, which were affected by massive selling after the mid-April GDXJ re-balance announcement, have made very nice moves since the beginning of June. Here is a link to the updated GDXJ fund holdings now that this dreaded rebalance is behind us: http://www.mvis-indices.com/indices/hard-asset/mvis-global-junior-gold-miners/components 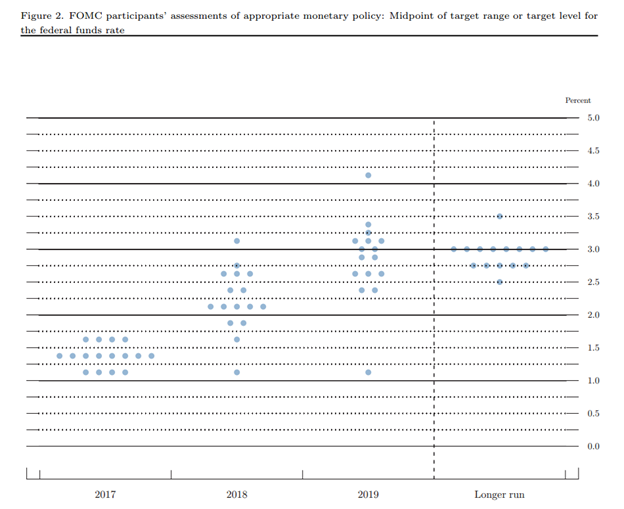 The good news is that miner sector investors can now focus on the fundamentals of each company and how they relate to the gold price as opposed to factoring in the GDXJ rebalance shenanigans. The bad news is that bullish short-term gold sector fundamentals were just torpedoed by the Federal Reserve’s Federal Open Market Committee (FOMC) statement earlier this week.

On June 14th, Fed Chairwoman Janet Yellen and her colleagues laid out a plan to shrink the central bank’s massive $4.5 trillion balance sheet starting this year, as they raised the key U.S. interest rate another quarter basis point. However, it was the central bank’s surprisingly hawkish tone which became the catalyst to break strong support at $1260 in the gold price the following day.

The market was expecting a more dovish tone and, therefore, was surprised by another rate hike being laid firmly on the table before year-end.

“Simply put, the Fed is just fearless, and they are not afraid of turning up the heat. Hence there is another rate hike on the table for this year,” said Naeem Aslam, chief market analyst at ThinkMarkets UK.

The targets for appropriate federal funds rates by FOMC participants are plotted in a chart that has come to be known as the "dot plot" and is used by the market to determine where the central bank believes rates are going, including its longer-term neutral rate.

The market reaction to the hawkish FOMC speech has put the sector on the verge of breaking down below both of these strong support areas this week. Furthermore, the oversold US Dollar also appears to have bottomed, so gold may continue to get hurt by the renewed appreciation in the dollar and US real rates.

In my column last week, I suggested if the $1260 level in gold, along with the $22 level in the GDX were breached on a weekly basis, we would probably see more weakness heading into July. If these levels are lost on the weekly close today, June 16th, I will be looking for more weakness down to the $1220 level in gold, along with the $20 level being strong support in the GDX. Weekly, and more importantly Monthly, closes below these levels would signal a possible breach of $1200 in gold, accompanied by the possibility of an $18 handle being seen on the GDX.

In anticipation of this possible move lower, I have sold a few laggards in my junior miner portfolio in an update sent to my subscribers this week. Hold fast miner investors, as this may be the beginning of a final washout before we can begin the next highly anticipated leg higher in this new precious metal miner bull market.