Compared to the impressive 300km+ velocity of the Train à Grande Vitesse, which today whisked us from Avignon to Nice, Gold's track this past week was akin to the far lower speed local rail extension across the additional 20-or-so kilometers eastward that finds us planted back here in Monaco for a short stint. And as we did a week ago, due to the time constraints of travel, we'll keep this piece brief.

Here within the 499 acres that make up Monaco, ("that toy kingdom down there" --R. Limbaugh), this wee principality impossibly continues to re-define and re-invent itself, becoming ever more dense and compressed without going anywhere. Just like Gold. For as the above year-to-date panel shows, Gold is basically hemming and hawing along -- consistently churning an average of some 250,000 contracts in volume per trading day -- without going anywhere.

One need only glance across the pieces of our fellow precious metals penners to sense the ever-anticipative fervour for a ferocious Gold breakout. Yet as the below weekly bars show to now from a year ago, Gold is essentially stuck in the narrow confines of its own wee principality: that inescapable purple-bounded 1240-1280 resistance zone. Indeed over the 24 weeks year-to-date, Gold for 16 of them has been within that zone. Yet as our Gold Scoreboard states, price ought be nearly 2700-to-date. Still, Gold remains but half that level, settling out the week yesterday (Friday) at 1255: 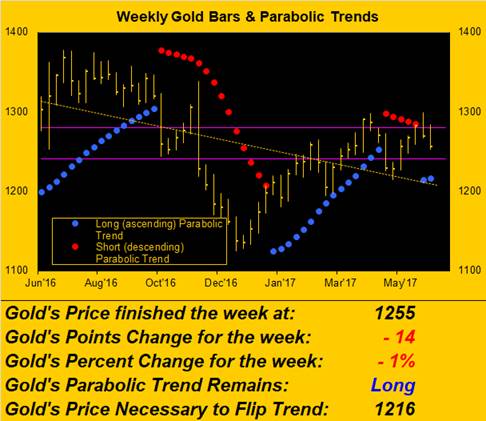 Further, as we oft lament, given the S&P 500's "live" price/earnings ratio of 34.7x, 'tis that which ought be halved. Add in, too, another turn of the interest rate screw by the FOMC crew, plus this accelerative dive in the Economic Barometer, and one can't but wonder just how much longer the stock market can stay so far yonder. Here's the Baro:

And through it all, Gold continues endlessly wallowing about in the mid-1200s, an annoyance to the long-term investor, albeit an opportunity to judiciously add to one's stack. For the trader, Gold's "Baby Blues" below left across the last three months of daily bars have been providing good directional guidance as the consistency of the 21-day linear regression trend ebbs and flows; below right in Gold's 10-day Market Profile, we find the most dominant of the nearby trading resistors at 1256 and 1269: 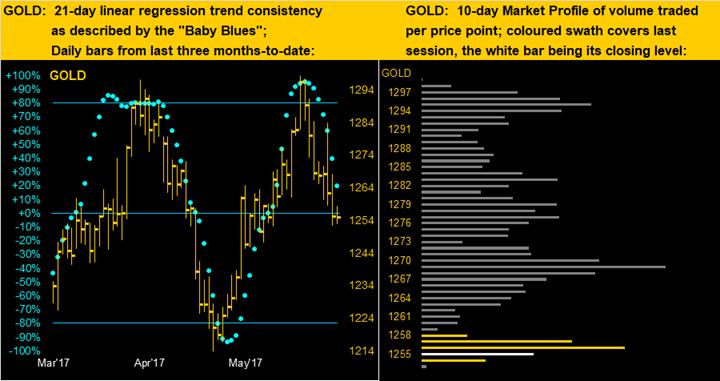 Similar are the views for Sister Silver as we here see, her blue dots (left) sweeping lower and trading resistance (right) initially at 16.75, then at 17.20: 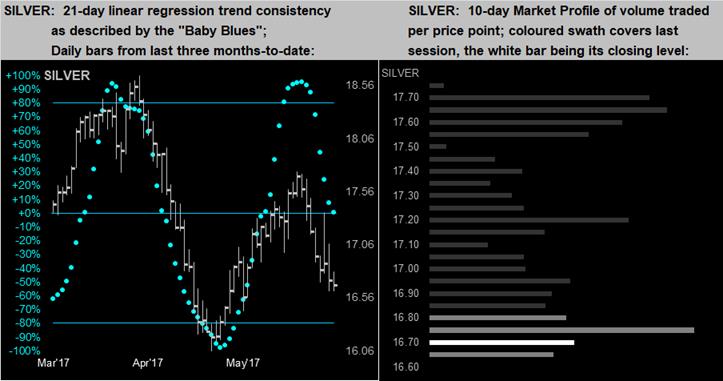 Ahead of this new week which is light for incoming economic data, we note these near-term technical reads based on Gold's daily bars: the parabolic trend is Short, the MACD (moving average convergence divergence) has just crossed negatively, the price oscillator is looking to go negative, and the moneyflow has just gone sub-50, (confirming on the 100-to-0 scale of more outflow rather than inflow). So barring the bizarre, (which ironically at times seems the norm), Gold's gliding to test the lower end of the 1240-1280 resistance zone would not be untoward. That said, why sell Gold if you can buy more? Indeed, stay Gold aware, for 'twill inevitably go somewhere ... toward rarefied air!