We were privileged to kick off the month of December yesterday (Friday) by taking coffee late in the trading session over at "the club" (oh yes) with a great and good friend of The Gold Update. In sharing the screen over which we'd been brooding since midnight of the S&P 500 futures, their having floundered on the Flynn Follies, only to recover in anticipation of the Senate's having enough votes (51-49) for its version of the tax bill, (next to be co-mingled with the House version), our topic swiftly switched to the precious metals. For in the microcosm of a single trading session, we were seeing just how untoward Sister Silver has been treated -- at the very least -- throughout this year.

To be sure, intra-session the metals had managed some bounce during the stock market's trounce. And as all of you know, generally Silver benefits as a precious metal when Gold rises -- and benefits as an industrial metal when Copper rises; where Silver oft is torn is when Gold and Copper move in opposite directions to one another, (although broadly, Silver has a more precious than industrial bias).

So as we glanced at the live percentage changes to that point of the trading day, we saw Gold +0.4% and Copper +0.8%: thus Silver must obviously also be up, right? Wrong: -0.4%. To reprise our favourite John McEnroe shock-quote: "You canNOT be SERIOUS!" Moreover, is it any wonder the Gold/Silver ratio is as high as 'tis? No, 'tisn't: 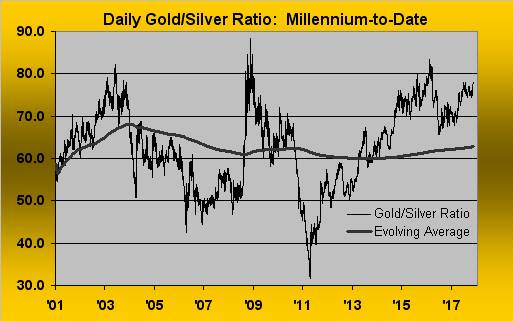 Speaking of percentage performances, with 11 months plus one trading day in the books for 2017, here are the year-to-date BEGOS Markets standings. Again, with both Copper and Gold up by double-digit percentages in 2017, oh how lowly we find Sister Silver:

Turning to Gold's weekly bars from a year ago-to-date we've for the fifth week in the last six a net change of less than 10 points: that has only occurred on two other occasions in the past 11 years ... and in both of the prior instances Gold then found itself more than 100 points lower within the ensuing three weeks. We know Gold sold off into the end of last year; a repeat this time 'round would really put the supportive notion of "The Box" (1280-1240) to the test:

Year-over-year as well, it being month's end, here we've Gold's daily percentage track along with those of these key equities brethren: from best-to-worst 'tis Franco-Nevada (FNV) +39%, then Newmont Mining (NEM) +15%, followed by Gold itself and the VanEck Vectors Gold Miners exchange-traded fund (GDX) both +9% (no miners' leverage there at all), and the losers Goldcorp (GG) -4% and "surprise surprise surprise" the Global X Silver Miners exchange-traded fund (SIL) -10%, (R.I.P. Jim Nabors). Or to quote Thelma Ritter from the film "Boeing Boeing" (Paramount '65): "It ain't easy, ya know...":

Indeed on the heels of last week's piece ("Gold Forever 1200") one marvels at the yellow metal hardly responding to anything anymore, albeit for the past 21 trading days (one month) Gold has remained relatively firm despite the rise in the S&P. Here are their respective percentage tracks:

In fact from the "Some People Will Never Get It Dept.", we heard in Thursday's wee hours a certain high-profile anchor on Bloomy Radio going about bitcoin's rise this year from Gold's price level (1200s in April) to over 10,000, whilst the yellow metal today still remains stuck in the 1200s. Besides which, what is Gold anyway but a rock from which a ring can be made, and moreover, that there are other rocks from which rings can be made. (And we know who you are out there as we assemble the candidature for the "Dopiest FinAnalysis of the Year Award").

Speaking of "doped-up", ever high-as-a-kite is the Economic Barometer. To be sure, the Econ Baro does include "soft data" metrics such as Consumer Confidence, Michigan Sentiment, regional Federal Reserve Bank surveys, et alia. But even discounting those since the Baro bottomed-out in September, the "hard data" would have still the blue line up to near that "hitch" 'round the S&P 2490 level:

Nevertheless, a level-headed analyst noted this past week that upon the tax bill being passed, in order for the understated loftiness of the S&P to be maintained, the onus will be upon earnings to catch up: and as you regular readers know -- by our honest math -- that means bottom lines for many of the Index's components having to at least double.

Now to zoom in on recent precious metals pricing. First for Gold we've our two-panel display of the last three months' trading days on the left and the 10-day Market Profile on the right. In noting throughout the baby blue dots' prior rise that price did not materially so do, now that they're falling, shall they again be ignored by price continuing to work sideways as has been the case these past six weeks? Gold best reclaim that territory above the 1287 resistor in the Profile, else The Box (1280-1240) truly will be tested:

Of course, Sister Silver's two-panel picture depicts a weaker view, the 21-day linear regression trend already having turned negative as the "Baby Blues" (left) pass well below their 0% axis. As for Silver's Profile (right), those resistors for recapture in the low 17s appear quite the stretch from here:

So with a month to run in 2017, our technical read for Gold and Silver would suggest some selling into year-end; 'course our longer-term fundamental read remains that the precious metals' undervaluation is inane given all the usual suspects of debasement, debt and derivatives. Such "3D effect" bodes ever so well for far higher prices. To wit, all those lovely levels to re-attain in the Gold Structure as shown here: 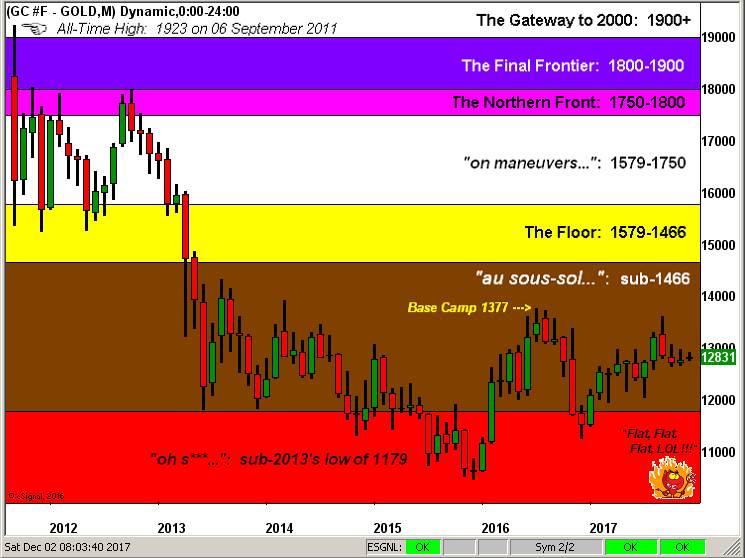 ¦ Beware the fragility of the stock market: 'tis running on fumes of euphoria, nothing moria. Our "live" price/earnings ratio of the S&P 500 has reached so far up beyond the stupid zone we're not even going to state it here, (yes you can see its four calculations at the website on the S&P 500 Valuations & Rankings page). But more importantly is just how swiftly the S&P came unglued mid-way through Friday, its intra-session plunge evoking memories of the impossibly violent trading we saw in 2008's unfolding of the Black Swan. Coming into yesterday's session, our EDTR ("expected daily trading range") for the S&P futures entire 23-hour session was 19 points -- so that 44-point loss in just 26 minutes should put you on CTA ("cautionary trading alert"). This ain't lookin' to be yer happy Santa Claus December Market out there.

¦ Beware the crazed cryptocurrency craving. A beloved family member of ours stopped by on Thursday. So went a portion of our conversation:

He: "I just bought a cryptocurrency!"

Me: "You mean the one for which a bunch of code conveniently vanished three weeks ago to the tune of $280 million?"

Me: "You do realize in a year's time it may be worthless..."

Me: "I don't really know: 'tis based solely on digital trust rather than business substance."

Might be nice if he got some Gold too, right? Or better yet: Silver!

"Git that Gold in them thar hills..."