Gold Getting a Grip? Bitcoin to be Bit?

True to form as described a week ago, Gold continues down into December, so much so that it briefly slipped below The Box (1280-1240) before eking out a net weekly gain of 8 points in settling yesterday (Friday) at 1258. Rounded to the nearest point, Gold also settled at 1258 on six other trading days this year, as well as on 29 January 2015 -- and say it ain't so -- too on 18 June 2010. To which with a wry eye one might mockingly muse that were Gold not a tradable entity, we've had seven years of nothing.

Or as an ardent Gold investing friend put it this past week: "It's hard to keep writing about something that never changes." But in a sense, that is the story. Amongst the actually rational Gold hype week-in and week-out to otherwise flatly write that price really isn't materially moving might make the late, great Howard Cosell exclaim in his best brash Brooklyn accent: "Now you're tellin' it like it IS, mmb!" Indeed analogous to the present state of the National Football League, perhaps for Gold we ought cue the rendition by The Danderoo of "Turn out the lights, the party's over..."

'Course, from the "Cooler Heads Prevail Dept.", we're quite cognizant that since Gold first achieved this 1258 level back in 2010, the StateSide money supply (M2) alone has increased 61% (from $8.61 trillion to today's record high level of $13.82 trillion). Linearly applying that increase to Gold values its price at 2020, not to mention our present Scoreboard's broader time and supply-based valuation of 2770. Still, from "The Market's Never Wrong Dept.", Gold is back to being box-bound as shown here in the weekly bars graphic, the red-dotted parabolic Short trend now eight weeks in duration: 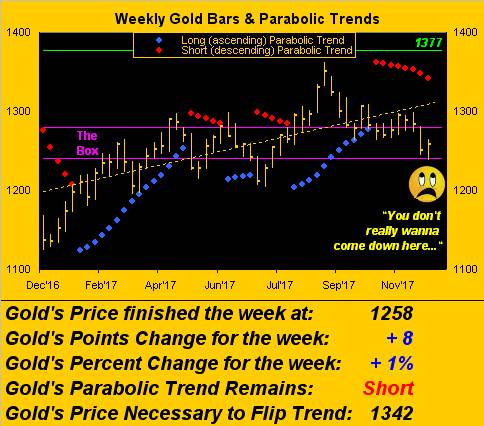 To be sure, expected tax relief, a firming Dollar Index, and comparably strong economic data have been boding brilliantly for the stock market whilst wresting resiliency from Gold. The 21-trading day (one month) percentage tracks for Gold vs. the S&P 500 give us quite the mirrored view: 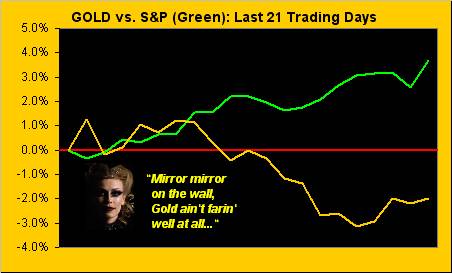 As to our describing recent economic data as "comparably strong", let's turn to the Econ Baro, in which we confirm the following landmark run: that green line astride the Baro (from 18 September through 14 December) depicts the steepest 63-day rise we've ever recorded in compiling EconData as far back as 1998. Remember, however, that the Baro is more of an oscillator than a simple linear indicator: should the incoming data continue to improve, but at a slower pace, and/or is revised lower, and/or is sub-consensus expectations, the blue line shall keel over. Moreover, what if pending corporate tax relief combined with economic growth is not sufficient to double earnings such as to support the current level of the S&P? Recall we did not see that during Q3 Earnings Season for which only 41% of the S&P 500 companies had better bottom lines than in Q3 of the prior year. Further, 'tis estimated at this writing that the pending tax legislation shall add some $1.4 trillion to the StateSide budget deficit over the next ten years ... an amount which one might consider as "peanuts" given that our money supply has recently been increasing by that expanse about every two years ... just sayin' ... Got Gold?

As well you ought, Squire, given the present Gold/Silver ratio is 78.1x vs. the millennium-to-date average of 62.8x, regardless of both precious metals having been on the skids of late ... which is clearly evident in our next two graphics. But are they now basing? Let's start with Gold, for which on the left we've its last three months of daily bars, the baby blue dots of 21-day linear regression trend consistency in free fall; yet we can also see price's departure below The Box (1280-1240) was ever so brief in leading to this rightmost bounce. We thus find price now centered on the right in the 10-day Market Profile a mere point above the support/resistance level of 1257:

With respect to Sister Silver, her "Baby Blues" (below left) are giving the appearance of already having bottomed, with price in the Market Profile (below right) smack on the 16.10 support/resistance apex:

So with just two trading weeks left in 2017, much of this year's theme has been about Gold's reprising 2016. One thus wonders if this yet again is December's annual dip leading to a January Gold grip. A week ago we described Gold's having put in six down Decembers of the past seven ... but that five of the past six Januaries have been up. Is this just getting too easy to trade? Save for the stock market which obviously never goes down, you know the old saying: "If 'tis obvious what a market is going to do, it generally doesn't." Let's see where the precious metals are in two weeks' time toward then making an directional assessment for January.

In closing, a few notes on this bitcoin business. Worthless as 'tis in our eyes, 'tis nonetheless being taken very seriously. So much so that, as you know, it had its Chicago Board Options Exchange futures trading debut this past Sunday (10 December), such frenzied event in turn causing upside trading limits to be hit twice and the CBOE's website to seize up. Now come tomorrow (17 December), what we view as bitcoin's "real debut" arrives as the Chicago Mercantile Exchange futures contracts begin trading. We plan to have the CME's bitcoin "market depth" data up on the screen ... not that we'd ever so engage in a trade ... 'twill just be fun to watch the pricing spasticity unfold come the day it all goes wrong.

Is that day far off? No one knows, (save perhaps for some entity preparing to clean out all the bids right down to $0/bit, limits be damned). Indeed, this past Thursday at an impromptu gathering of our Investors Roundtable, an esteemed member declared the top as now being in for bitcoin "...because my spouse thinks we should buy some." More broadly, we've read of folks taking on home mortgages so as to buy bitcoin. Really? Then there's the digital thievery of the stuff and the inability for accounts to be accessed under traffic overloads. Maybe this is "it" after all, i.e. a frightening financial mechanism blowout.

Oh and here's the best bit: futures settlement for bitcoin is "financial". (Good luck with that!) 'Course for Gold, settlement is "physical". Now you think about that!