Talk about the perfect sequel to that written a week ago: indeed Gold got that grip whilst bitcoin got bit. Oh were it always this easy all of the time! Here we go:

But bitcoin really bit it ... and bit it bad. You'll recall a week ago our being all amped up about watching bitcoin begin trading in real-time on the Chicago Mercantile Exchange. Scary? Oh yes.

Let's take you directly into the fray with this screenshot we took on Thursday at 07:00 Pacific Time, the moment of the trading day when markets are generally at their most robust level of activity. Below from left-to-right are the "market depth" bids and offers for the futures of Gold, the S&P, and bitcoin. Gold's market (left) appears very normal, liquid and balanced, as does that for the Big Daddy of futures trading, the S&P 500 (center). But look at bitcoin (right): illiquid, unbalanced, and thin with pricing gaps. That spells one word: "~~DANGER!~~"

'Course we all saw what happened: after trading as high as 20,650 on Monday, bitcoin fell to as low as 12,265 by Friday. That's a plunge of -40% ... and you don't need your abacus nor slide rule to project that bitcoin at such of wane would be worthless by Wednesday. So great timing by Goldman to have just announced the opening of their cryptocurrency trading desk, eh? "Saved by Sachs!" ... perhaps.

Now let's switch back to substance: Gold. And in viewing its weekly bars we see the purple bounds of The Box having again done their supportive due diligence. Further, the descending red dots of parabolic Short trend and present price appear equidistant from the end of the ascending dashed linear regression trendline. A meeting of them all at 1300? It does have "that look": 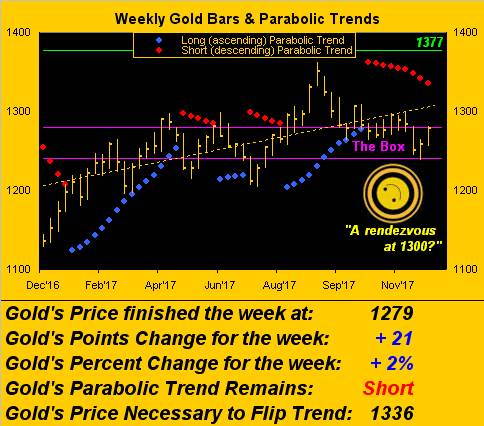 Meanwhile, our oscillating Economic Barometer this past Wednesday recorded its highest wave level since late August 2014. Back then, the S&P 500 was just teasing price at 2000 for the first time ever, subsequent to which during the ensuing 18-month stint into February 2016, the mighty index hemmed and hawed, correcting as much as 15.2% from 2134 (20 May '15) down to 1810 (11 Feb '16) before its assault since then toward 2700. Does history repeat itself such that stocks stall through at least all of next year? Shall earnings double given the strengthening consumer economy and the just-enacted 40% reduction in the corporate tax rate? Those on "the left side of the aisle" need something lousy to happen to have any chance of regaining legislative control, and a stock market malaise would gain their praise, albeit history shows us that tax relief economically pays. And this current view does amaze:

Now to the last three months of daily bars for Gold on the left and Silver on the right. And therein we see for both precious metals "traders' delight" with the baby blue dots of 21-day linear regression trend consistency adroitly having turned up as the week commenced, prices never looking back. Obviously for Gold, its having returned to the top of The Box (1280-1240) may yet again herald resistance; note too the thicket of pricing congestion through the center of Gold's panel. As for Sister Silver, her congestive thicket shows farther up the road in the 16.80-17.20 area; thus presently at 16.45, she has upside room to run, which would coincide well with our Market Rhythm Target of 16.78, (Silver's daily parabolics having confirmed flipping Long last Monday as noted in the daily website commentary):

As for their respective 10-day Market Profiles, the resistive apices for both Gold (below left) and Silver (below right) morphed into support as the week unfolded. Gold's key trading supporters are now 1269 and 1257, whilst the platform for Silver shows at 16.25:

In anticipation of our year-end missive in a week's time, we extend our wishes for a peaceful and wonderful Christmas to everyone everywhere.