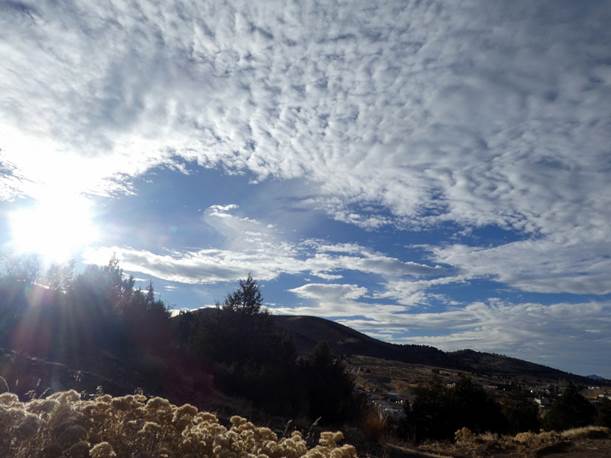 A “fantastic” indicator comes back to life 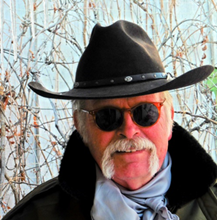 One of the best questions you can ask as this year draws to a close is where the 10-year Treasury yield will go in 2018. This key interest rate is sensitive to the growth of the U.S. economy, changes in Federal Reserve Policy and foreign investor demand – it also shares a peculiar relation with gold and copper prices. In his 2017 forecast, bond guru Jeffrey Gundlach of DoubleLine Capital LP, noted that the copper-to-gold ratio is a "fantastic" coincident indicator of interest rates. Mr. Gundlach used the 10-year Treasury yield as an interest rate benchmark for comparison. I’ve written three Kitco News commentaries about the relation this year, April 18, June 21 and August 23. It has been a truly stunning cross-asset correlation stretching over many months but showed troubling divergence in late-summer as discussed in the August column.

Since then, it appears the Gundlach correlation has recovered and is again on solid footing. On a 2-year basis, the copper-to-gold ratio correlation to the 10-year Treasury was +0.81 around the time Mr. Gundlach made the observation for his forecast. It improved through most of the year and peaked at +0.94 in June. The yield and ratio then began to decorrelate going in decidedly different directions by early-September. Recovery is now underway and the correlation has returned to a healthy +0.92 for late-December. Understanding why this departure occurred shines some light on what may happen in 2018. 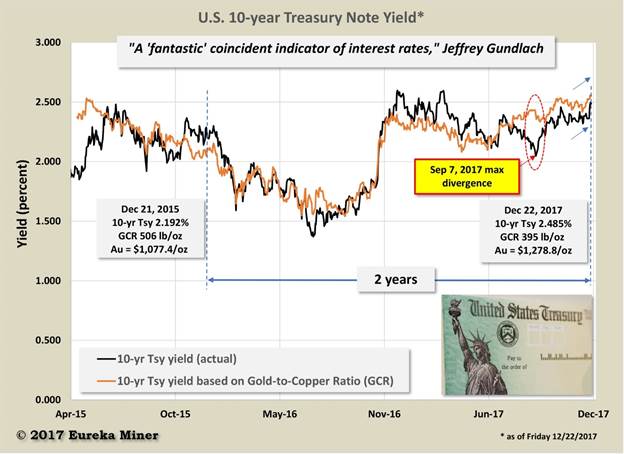 This graph compares the model output to actual 10-year Treasury yields through last Friday’s close, December 22. I chose the gold-to-copper ratio (GCR) for this analysis since we think in "pounds-of-copper-per-ounce-of-gold" in Northern Nevada. Gundlach correlations are positive; mine are negative – the results are the same. The actual and model yields track each other with surprising fidelity but then depart showing a maximum divergence on September 7. The yield trajectories are now marching together and moving higher (blue arrows).

How good is this model?

A good regression model provides a basis for predictive analysis; a bad one is about as useful as bald tires in a Nevada snow storm. Table 1 shows some accepted measures of “goodness” for the early-summer and late-December models:

The June model has a statistical error (or standard deviation) of only 10.5 basis points (bps) with a tight correlation of -0.94 as previously noted (with sign change). The regression R-squared or “goodness-of-fit” is an impressive 0.89, especially good for a cross-asset relation (the closer to 1.0 the better). Due to the September divergence, the current fit has degraded some but can still boast a 12.7 bps error over 2-years and a respectable R-squared of 0.85.

The model should be able to determine what the GCR will be given future interest rates. Figure 2 shows the GCR for 2017 together with projected GCR levels. 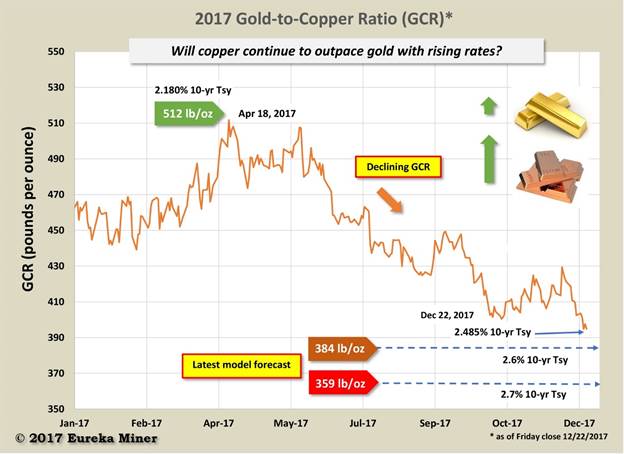 Note that when the 10-year yields were below 2.2%, the GCR peaked to an elevated 512 pounds per ounce. The ratio has trended lower since with rising yields. At Friday’s close the 10-year was just below 2.5% with a GCR of 395. The model suggests further ratio compression to even lower levels for 2.6% and 2.7% prediction; 384 and 359 pounds per ounce respectively.

What does this mean for copper and gold going forward? In the Gundlach world, rising rates mean rising copper-gold ratios (i.e. falling GCRs) - copper increasingly gains vale on gold as shown in Figure 2. Many believe copper prices will rise in 2018 due to improving growth prospects for China, global synchronous recovery and the expectation of a U.S. infrastructure program next year. If copper prices were to rise to $3.50 per pound and 10-year yields to 2.7%, Figure 2 suggests a gold price of $1,256 per ounce. By this logic, higher copper prices and interest rates put substantial pressure on the yellow metal.

However, it is instructive to understand the early-September model divergence. By late-summer, there were fresh North Korean threats, the U.S. was in the midst of three devastating hurricanes and the ECB pondered tapering their bond buying program. On September 8, Comex gold peaked at $1,366 per ounce in full safe haven mode as copper fell toward sub-$3 territory. This suggests the Gundlach relation falters in times of heightened fear and uncertainty. In less anxious times, the relation between yields and the GCR is restored.

Let’s assume 2018, like 2017, is a mix of buoyant market expectations and rising rates with occasional geopolitical, political and economic shocks. For this scenario, the Gundlach relation will continue to place bearish pressures on gold price relieved occasionally by adverse events. I believe it likely this dynamism will put a floor under gold price around $1,200 to $1,250 with the possibility of price spikes to $1,300 to $1,350.

What Mr. Gundlach identified as "a fantastic coincident indicator” exceeded expectations for much of this year. Correlations come and go in markets, let’s see what happens to this one in 2018. So far, so good.