Back in early 2016 as precious metals rebounded, our work showed that gold stocks were arguably the cheapest they had ever been. They had the worst 5-year and 10-year rolling performance ever, they were trading at potentially 40-year lows on a price to cash flow basis, they were the cheapest ever relative to the stock market and Gold and most notably, the Barron’s Gold Mining Index was trading at the same level as 42 years ago! The gold stocks enjoyed a massive recovery in 2016 but it was short lived as the sector corrected and then consolidated (far from the highs) for over a year. Although we have a tendency to be too conservative at times, over a month ago we noted a historical pattern that bodes extremely well for gold stocks over the next few years. That outlook is reinforced by the continued historic value in the gold stocks as exhibited by the following charts.

First, we focus on the long-term rolling performance in the gold stocks. The chart below plots the S&P TSX Gold Index (data obtained from Global Financial Data) along with its rolling 5-year and 10-year performance. By that metric, the gold stocks (going back +80 years) were the most oversold in late 2000 and early 2016. If we were to run a 15-year and 20-year rolling performance then the three most oversold periods would be late 2000, early 2016 and the late 1950s. The gold stocks enjoyed massive long-term returns from the late 1950s and the year 2000. 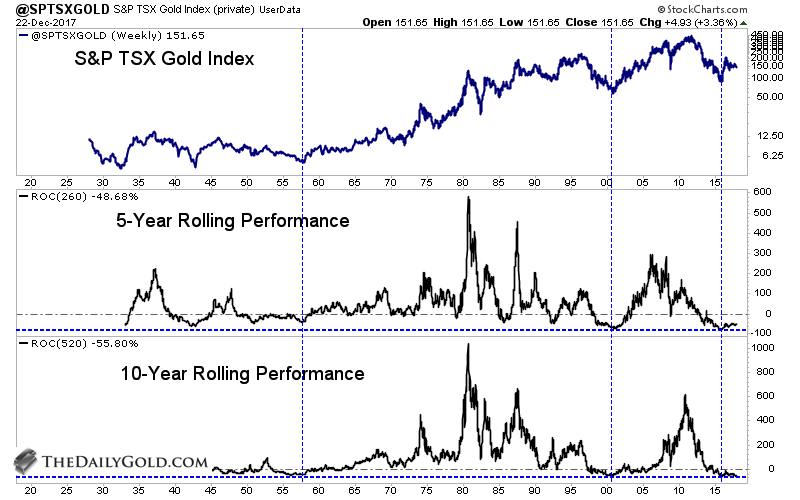 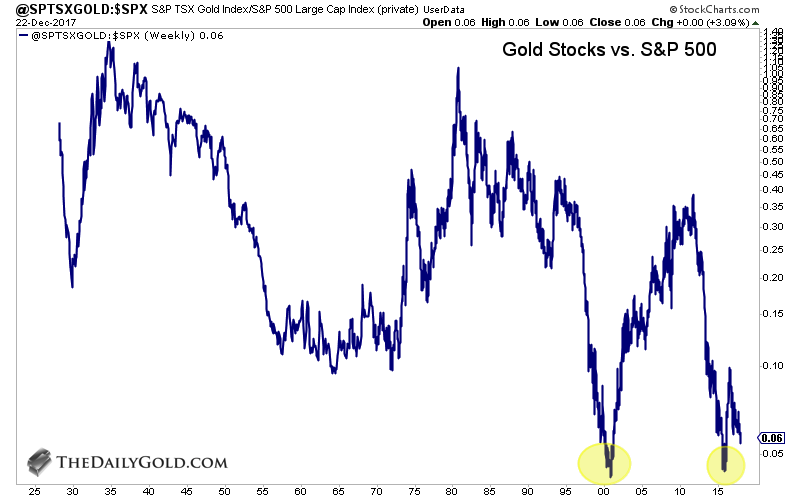 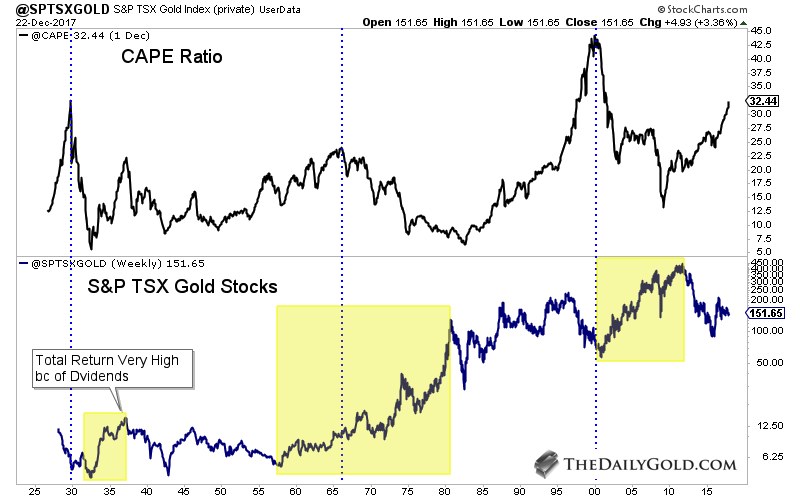 Next we plot the gold stocks relative to Gold. We use both of the historical gold stock indices, (the S&P TSX Gold Index and the Barron’s Gold Mining Index). By the end of 2015 the gold stocks were historically cheap by many metrics. Interestingly, that includes Gold even though Gold itself at the time was down 45%! 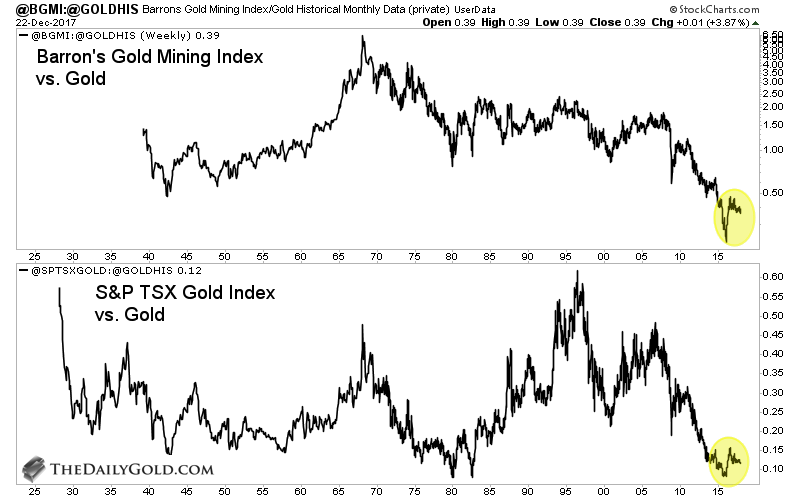 Finally, the last chart shows how cheap Gold potentially is. It’s important because the gold stocks could be very cheap when Gold itself may not be cheap. This was somewhat the case in 2012-2013 and that is why gold stocks remained a deep value for several years. However, since then Gold has become so much cheaper relative to the money supply, monetary base, equities, and even bonds. The chart below is from GoldMoney. They plot Gold against FMQ which is the quantity of fiat money.

When we step back from the day to day and week to week wiggles in the gold stocks, we need to realize that a historic low is in place (January 2016) and after a nearly 18-month long correction and consolidation the sector remains extremely and extraordinary cheap on a historical basis. This, and not the wiggles in charts or market sentiment ensures that forward returns in the sector will be strongly positive. Those tools help with market timing and spotting risks and opportunities. While the recent low in gold stocks may be more significant than we think, history suggests a very strong second half of 2018 for the gold stocks. Moving forward, the key for traders and investors is to find the companies with strong fundamentals with value and catalysts that will drive buying. To follow our guidance and learn our favorite juniors for 2018, consider learning more about our premium service.