Flashback to Stateside Tax Day, 15 April 2013. Do you remember what really got "taxed" that day? Gold: high-to-low it fell 160 points from 1495 to 1335, the largest single-day points thrashing through this millennium's 17 years, and on a percentage basis (-10.7%), the third worst of the bunch. Following that fallout, Gold continued through springtime attempting to spring back, only to then bang about between the upper 1300s and lower 1400s. Then come 28 August of that year, Gold reached up to tag 1434, only to have traded lower ever since. That's the bad news.

The good news is that the rampant, bad-mouth impugning of Gold is down to a few also-rans, (who perhaps are blindly buying bitcoin). And let's face it: not only has Gold's price consolidated since the December 2015 low of 1045, but despite seemingly having been stuck forever in the 1200s, it has put in fairly respectable years back-to-back with net gains of 9% in 2016 and now 13% for 2017, closing out the latter yesterday (Friday) at 1305.

'Course since the Dollar's unraveling to the Gold Standard, from 1975 there have been 25 up years for Gold, their median annual net gain being 18%; (for the 18 down years, their median annual net loss is 8%). So the two most recent years of net percentage gains for Gold have been clearly been below par. And per the above Scoreboard, the dirty little secret that agonizes us all is that Gold by U.S. currency debasement alone ought rightly be presently priced at 2781. To reach that level during 2018 requires a price rise of 113%. 'Tis not gonna happen, (barring 2018 becoming a re-run of 1979 when Gold recorded a net gain of 136%, 1978's gain running a distant second at only 37%).

That said, we see very minimal downside risk for Gold in 2018. Rather, the key is yet again returning up to Base Camp 1377 (2016's high and 2017's "near high" of 1362). Then at 1377 we look for the fun to begin. You know the old trading expression that "Triple tops are meant to be broken"? As price closes in on 1377, 'twouldn't surprise us a wit see a zillion buy stops hit the market just in or above there. That in turn ought open the top fuel dragstrip for the nitro-burning drive back above 1400, the finish line being a retest of 1434 for the year's high. Dramatic? Perhaps. But still conservative as the overall run from 1305 to our 1434 target would be but a 9.9% gain. 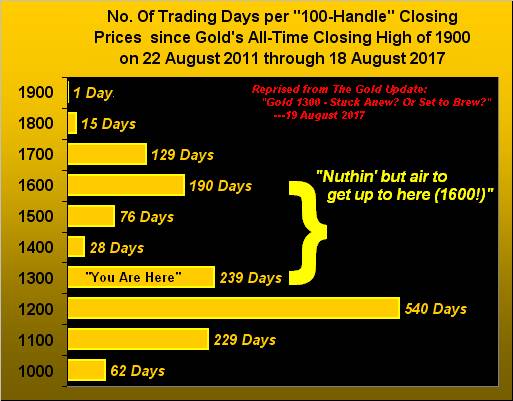 As for putting the trading bow on 2017, here are the final standings for the BEGOS Markets. The year's theme song? "Down with the Dollar, Up with the World". But here's the real take: industrial metal Cousin Copper rose a dominant 31.4%, precious metal Gold finished mid-pack with a rise of 13.3%, yet the paired metal Sister Silver managed just a 6.4% gain? The Gold/Silver ratio finished the year at 76.8x; the ratio's millennium-to-date median is 63.2x. (Hint Hint, Wink Wink, Nudge Nudge, Elbow Elbow):

Specific to Gold, in looking at its weekly bars with the descending red dots of parabolic Short trend and rising dashed regression line, we queried a week ago "...A meeting of them all at 1300? It does have 'that look'..." Look indeed. 1300 achieved: 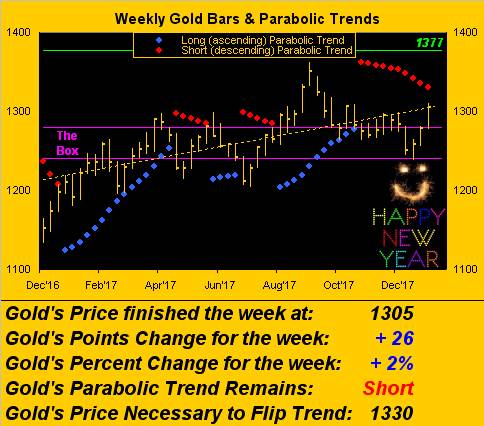 Also year-over-year for Gold along with some of the key precious metals equities we find Franco-Nevada (FNV) +30%, the yellow metal itself +13%, the miners chasmatically behind as measured by the VanEck Vectors Gold Miners exchange-traded fund (GDX) +7%, which includes Newmont Mining (NEM) +6%, the Global X Silver Miners exchange-traded fund (SIL) -3%, and taking up the rear the gangly galloper Goldcorp (GG) -8%. The year's tune for the miners? "Ma leverage dun hemorrhaged...":

On to 2017's Economic Barometer, which from late in Q3 through most of Q4 went on its steepest upside tear since our compiling EconData from as far back as 1998. As for the "I wanna be like bitcoin too!" S&P 500, just how expensive has it become? (You best be sitting down for this). If we kindly, benevolently, dare we say conservatively eliminate all of the S&P's constituents having earnings of less than $1/share on a trailing 12-month basis, that leaves us with the "S&P 424", the "live" price/earnings ratio for which right now is 34.0x, (more than double the taught "norm"). Shall the 40% reduction in the corporate income tax rate serve to double earnings? Or will the S&P (presently 2674) halve itself to 1337? If a bit of both, the "mid-point" is practically smack on S&P 2000. Just a thought for some post-New Year sobering:

As for the precious metals near-term, let's first bring up Sister Silver toward giving her some of the attention she's lacked so much this past year. On the left, Silver's daily bars have been rising like a phoenix, the baby blue dots of 21-day linear regression trend consistency racing astride in upward glide. On the right, the 10-day Market Profile suggests trading support down to 16.75:

Quite similar to those for Silver do we find Gold's two panels, the daily bars below left and Profile below right. Indeed should you peek at the website's Copper page, the patterns there also look very much the same. Pedals to the Metals in 2018, baby:

In closing out 2017's colourful graphics parade, here is our broad-based Gold Structure graphic, the upper strata designations longing to be penetrated. Again our aggressive Gold high call for 2018 is 1526: 'tis not enough to clear the basement (sous-sol) such as to get back up onto The Floor, yet we'd certainly welcome so much more: 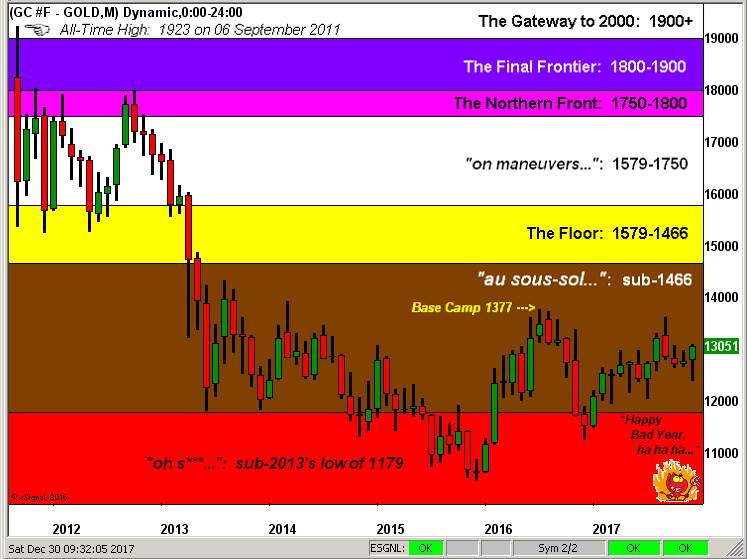 So there 'tis, folks. Arrivederci to 2017, and for Gold and Silver, let's bring it on in 2018. Technically, Gold's consolidation these last two years with an upside bias is supportive of driving price to higher levels. Fundamentally we see nary a wit to get out of Gold. "Oh, 'tis all about bitcoin!", they say, to which we say, BS. "Oh, 'tis all about rising interest rates!", they say, to which we say remember 2004-2006? If you don't, put down that glass of champagne and look it up. Indeed LOOK up, for that's where we'll see Gold in 2018!

Please have a Safe and Happy New Year and we'll see you on the other side.