A new year and a new look for the above Gold Scoreboard, incorporating both our conservative and aggressive forecast highs for 2018. Also at right, we've added that which we've oft referred to as "Gold's most important graphic": the millennium-to-date track of the U.S. money supply ("M2") vs. the clearly lagging price of Gold. Quite a bit of catching up to do, what?

And with the year kicking into first gear, 'tis time for price to up-shift through the descending red dots of weekly parabolic Short trend to flip it Long. For as the weekly Gold bars graphic shows us, we need just seven more points to the upside such that a fresh set of new blue dots can support Gold for the drive up toward Base Camp 1377. Such run would surpass last year's high at 1362, 1377 being 2016's peak: 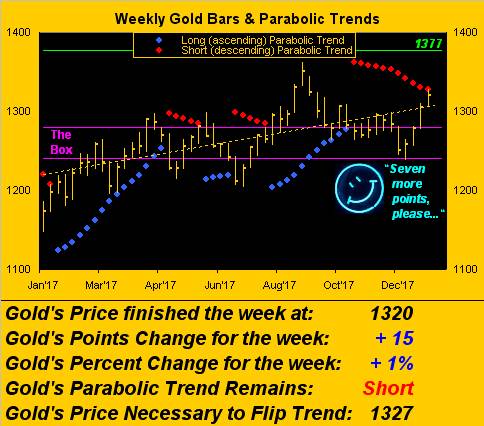 Next we've Gold day-by-day since its All-Time Closing High at 1900 back on 22 August 2011. 'Tis grand to see Gold moving up and away from both its 300-day moving average as well as from the purple bounds of The Box. Again, the impetus to far higher Gold pricing is to initially get above that green line at 1377 and bid it "Adieu bébé!" Here's the graphic:

'Course what had really been gettin' its due until getting "doinked" in starting the new year is the Economic Barometer. The Trade Deficit per the November reading exceeded $50 billion for the first time since March 2015 and Factory Orders missed expectations. Also missing consensus for December were the Institute for Supply Management's Services Index and most notably the growth in the month's payrolls. As for the stock market per the S&P 500, it kicked the year off right out of the stadium:

Indeed for stocks, to reiterate/update that calculation we performed a week ago: discarding from the S&P 500 all the constituents with earnings per share of less than $1 gives us the "S&P 424", our "live" price/earnings ratio for which is now 35.4x. We shan't really see the effect of the corporate tax rate reduction (from 35% to 21%) until Q1 Earnings Season kicks off in early April. But first, the season for 2017's Q4 earnings begins in the new week: recall that for Q3, only 41% of the S&P 500 companies bettered their year-over-year bottom lines. So just as Gold has a long up way to go in mitigating currency debasement, so do earnings have a long way to go to catch up to stock prices ... or for prices to "catch down" to meet earnings. 'Tis gonna be a "fun" year. And we doubt the recent positive correlation between the S&P and Gold shall last throughout. Indeed as we view their percentage tracks for the past 21 trading days (one month), one wonders: is this their parting kiss?

In no small part has the precious metals' trip been on an upside rip. As we turn to the last three months of daily bars for Gold on the left and Silver on the right, we find the yellow metal having climbed 89 points (+7.2%) from 1238.3 on 12 December to 1327.3 on 04 January, whilst the white metal rose 1.690 points (+10.8%) from 15.635 also on 12 December to 17.325 on 05 January. Moreover from a structural standpoint, Gold has broken above all that "price bunching" you see across most of its panel, whilst Sister Silver has reached only the upper bits of her previous bunching. We know she's been lagging as measured by the Gold/Silver ratio -- presently 76.5x vs. the millennium-to-date average of 62.8x, so she's got still got plenty of room to outrun Gold: were she at that average today, her price would be 21.010 given Gold having settled the week Friday (yesterday) at 1320.3, but Silver at only 17.260:

Now let's bring up the 10-day Market Profiles for Gold (left) and Silver (right). The good news here is not only that their respective prices are at the upper reaches of the Profiles, but further that the bulk of trading volume for these past two week is also up here as well, rather than being thin and comparatively sparse as we see at the lower levels. Arguably, that can make for swift downside selling, but 'twould rub against the broader bullish sentiment we've had in starting the year:

How does it therefore all stack up for Gold? To its stack we go:

Gold's Value per Dollar Debasement, (from our opening "Scoreboard"): 2777

Trading Resistance: none, per the Profile

And to you as well, Squire. Conspicuous by your absence, of course. You do realize folks write in asking of your whereabouts? Back in the Italian Alps again?

"The paratroopers let me lead a ski squad over the Simplon Pass into Switzerland."

An area of fond memories for us. I trust that, as usual, you checked the bullion supplies at Amsteg?

"I brought the whole squad with me, mmb."

Subtle as ever, our Squire. In the new week however, "subtle" may not be the stance of the Econ Baro. Amongst the myriad of incoming metrics, consensus is for slowing performance, which ought serve to push the Baro a bit lower still. But as for the precious metals in commencing 2018, so far, so Gold! 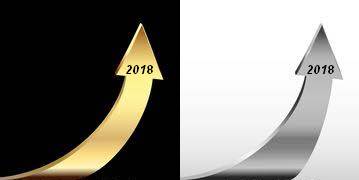